Set to launch before the 2019 festive season, Tata’s Baleno rival seems to be shaping up well! 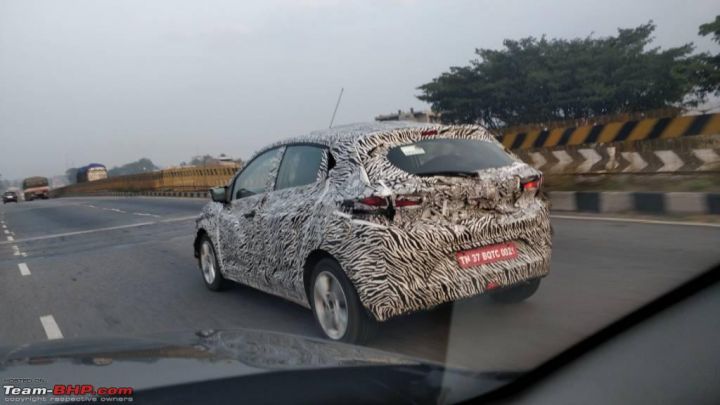 - Tata’s first premium hatchback will rival the Baleno and Elite i20- Expected to be priced between Rs 5 lakh to Rs 8.5 lakh (ex-showroom)- Likely to launch by September 2019, just before the festive seasonTata’s 45X is metamorphosing from a sweet-looking concept to a hatchback you and I can buy. It’s been spotted doing final rounds of testing in Tumkur by Team-BHP member ‘soumobakshi’. While it’s draped in camo from bumper-to-bumper, the spy pics give away a few interesting details, including a sneak peek at the interiors.

First things first, we see the design being toned down amply from the Concept 45X. We’ve seen this in the case of the Harrier recently. The flashy show car bits, such as the oversized wheels and the extra-sharp body lines, have been ditched in favour of what’s production-friendly, and more importantly, practical for everyday use. There’s a bit of a design theme developing at Tata, it seems. The connected taillamps merging into the rising shoulder line, the larger three-dimensional grille, and the sleek headlamps flanking the grille have the Tata design team’s stamp all over it.

And for the first time in a while, we’ve also got a clear look inside the cabin. Here, the free-floating touchscreen instantly grabs attention. At the unveiling of the Harrier, Pratap Bose, head of design for Tata Motors, said that touchscreens are deliberately kept as a separate unit and not integrated into the design of the dash. The maximum screen size Tata Motors can choose is otherwise limited. A good example here is the Hexa, which despite it’s otherwise massive everything, has to make do with a Tamagotchi-like 5-inch screen. At a quick glance, the screen on the dashboard of the hatchback appears to be a 7-inch unit, something that could be shared with the lower variants of the Harrier at a later stage. Another interesting detail that caught our eye was the shape of the steering wheel. We spot contours at ten and two, and a plethora of buttons too. When we last spotted the 45X at night, we saw a blue backlit screen inside the instrument cluster. Is it going to be a large screen like in the Harrier? Or a simpler central MID with cool graphics? This is something we’d want to know! As far as features are concerned, expect Tata to throw in the usual. This includes drive modes, automatic climate control, steering-mounted audio controls and a stellar music system tuned by Harman.  Engine options are anyone’s guess at the moment, but we’d place our bets on the Nexon’s engines being carried over into the hatchback as is. What makes us drool a bit is the thought of a JTP version of this.

We should see the production-spec version hit showrooms before Diwali 2019. And to hit rivals where it hurts the most, expect a competitive price tag too, which is likely to begin at Rs 5 lakh and top out at Rs 8.5 lakh (ex-showroom). Enough to get you excited about Tata’s next big launch? Let us know in the comments section below.

Seven-seat Tata Harrier in the Works