#Schumacher2000: When Michael and Mika Walked On Water 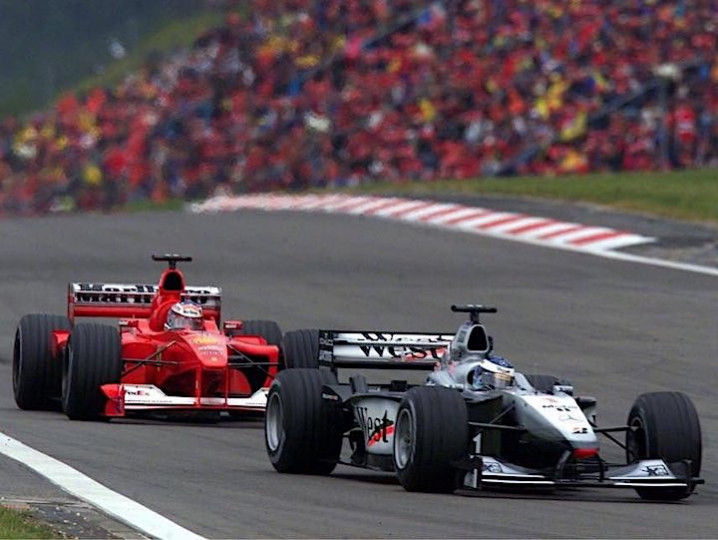 In the first part of this series, where we look at notable races from the 2000 season on the day they were held 20 years ago, we did a throwback to the San Marino Grand Prix. Michael Schumacher won to make it three wins out of the first three races of the season. It was the first time he won with both two-time defending world champion Mika Hakkinen and his McLaren-Mercedes teammate David Coulthard finishing a full race distance.

On this day in 2000, Schumacher triumphed at the sixth round of the season after a race-long battle with Hakkinen at the European Grand Prix.

One can never tell the story of Schumacher’s career without mentioning Hakkinen. The Finn marked himself as a star of the future when he replaced Michael Andretti as Ayrton Senna’s teammate for the last three rounds of the 1993 season.

At the ‘93 Portugese Grand, his first as Senna’s teammate, he out-qualified the Brazilian by 0.048 seconds to claim third place on the starting grid. At the following round at Suzuka, Senna out-qualified Hakkinen but only by 0.032 seconds to claim second place on the starting grid. Senna finally put some distance between himself and Hakkinen in qualifying at the final round by lapping the Adelaide Street Circuit 0.735 seconds faster than Mika.

The point had been made, though. Michael Schumacher wasn’t the only driver to watch out for in the future. In the right car, Mika Hakkinen could win races and maybe even championships. That point was driven home in 1998 and 1999 when Hakkinen won 13 races over the course of those seasons and consecutive driver’s titles too. Having Adrian Newey as the technical director of McLaren-Mercedes clearly helped!

Fast forward to May 21, 2000 and 21 of the 22 drivers on the F1 grid were lined up to start as Nick Heidfeld’s Prost-Peugeot was found to be underweight and thus barred from the race. Hakkinen had finally won his first race of the season at the previous round in Spain. Schumacher led the points table 36 to 22, but Hakkinen had outscored him 16 points to six over the last two rounds.

At the front of the field, McLaren-Mercedes’ David Coulthard was on pole from Schumacher and Hakkinen as the air and track temperature dropped to 11 and 12 degrees celsius, respectively. It was still dry so all the runners were on dry weather tyres but all but four chose the softer of the two compounds made available by Bridgestone. A wise decision considering the softer compound would heat up faster and provide more grip.

Schumacher was one of the drivers to go for the harder compound along with his Ferrari teammate Rubens Barrichello. It initially seemed like a bad decision as Hakkinen rocketed off the line at the start of the race and took the lead of the race.

Despite Hakkinen having tyres better suited to the conditions, Schumacher latched on to the Finn and kept his Ferrari on the McLaren’s tail until he pulled off an overtaking move on lap 11 of the 67 lap race. Within the next two laps, along with being cold, the track was now getting showered with rain.

Both drivers had problematic pit stops but Schumacher still held his lead while Hakkinen had fallen to fifth place. Right behind Schumacher was an eager Coulthard and he tried to pass the German but his attempt was blocked.

Schumacher started to pull away from Coulthard and McLaren saw that Hakkinen was catching both drivers. On lap 20, Coulthard allowed Hakkinen to pass him and set off after Schumacher. The conditions were treacherous enough for Schumacher to lose control of his Ferrari briefly on lap 22 but he kept on going.

At this point, Ferrari team principal Ross Brawn decided to get a little creative with the race strategy and on lap 35, brought Schumacher into the pits. The Ferrari F1-2000 was heavily fuelled in order to make it to the finish of the race as due to gentler throttle inputs, fuel consumption would be less in wet weather.

Hakkinen made his final stop of the race on lap 45 and Schumacher’s strategy of fueling heavy - he still had to put in consistently fast laps - paid off and he took the lead of the race. The results after the race just drove home how Schumacher and Hakkinen were a class apart and how Schumacher had to really earn a race win.

Schumacher won the race by 13.822 seconds from Hakkinen. Every other driver was at least one lap behind! Only nine of the 21 starters finished while three more were classified, but retired from the race. Seven drivers failed to finish either because they spun off or collided with another car.

If proof was needed that the 2000 driver’s world championship was really between two drivers, that year’s European Grand Prix provided it in spades.