2020 Porsche Taycan Goes All-Digital On The Inside

Sales will commence in December with 20,000 units expected for the first year. 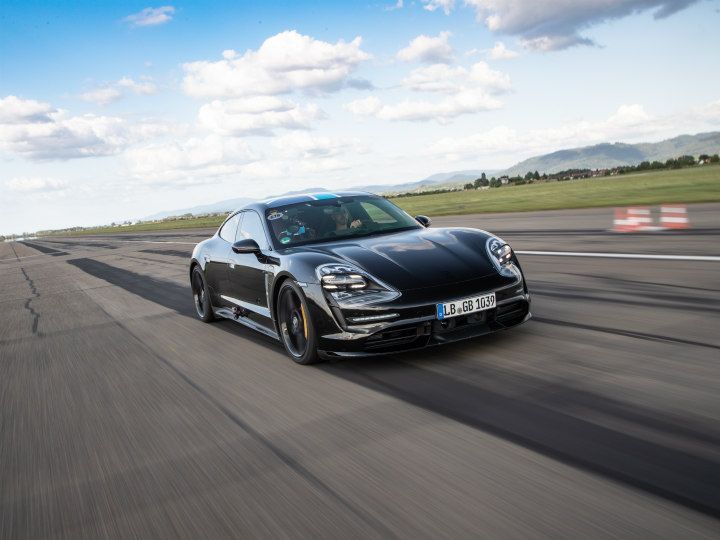 In the past few months, we have seen a variety of spy shots and important updates regarding Porsche’s first EV called the Taycan. However, we never got a glimpse inside the upcoming EV, until now. Ahead of its September 4 debut, Porsche has finally revealed images of its first electric car’s cabin and it is as futuristic as you thought it would be.

First impressions of the cabin reveal that, the Taycan has not swayed from Porsche’s traditional design. It retains a two-element dashboard layout with a horizontal upper wing and a narrow lower wing. One of the main highlights on the inside is a massive 16.8-inch curved digital instrument cluster above the steering column. The MID is offered with four different preset modes- Classic, Map, Full Map and Pure which alters information displayed on the MID as per its settings.

The MID retains the five-dial layout which is common in modern Porsche’s displaying the different driving modes available.  Around the cluster feature touch-capacitive buttons that control the headlights, stability control, suspension firmness, and judging by the image released, the vehicle’s ride height.

To the right of the instrument cluster is housed a 10.9-inch touchscreen infotainment system but going towards the passenger side, there’s another optional display which is something never seen before by Porsche. Judging by the cleaner interface compared to current Porsches, it looks like both displays will utilise an operating system that’s distinct and smarter. If you look closer, the three-tile display layout on the passenger display looks similar to BMW’s iDrive OS. Fortunately, the displays blend in very well to the dashboard layout compared to the clunky tablet style designs being used in today's models.

The center console houses another display that is 8.4-inches with haptic feedback. It will be the primary display for climate controls and also displays the charge level when plugged in. Other highlights include handwriting recognition and an updated version of Porsche’s Virtual Assistant.

The upcoming EV is built on the J1 platform and takes inspiration from the Mission E concept. The Taycan gets some design cues from the Panamera and the carmaker claims that it will slot between the Cayenne and the Panamera.

Technical specifications for the Taycan are yet to be revealed, but Porsche claims, the Taycan will do a 0-100kmph sprint time of around 3.5 seconds and a top speed exceeding 250kmph. Its range is also expected to be around the 500km mark. The Taycan is expected to carry a 90kWh capacity battery alongside an 800 volt fast-charging setup that could give it around 100km of range in 4 minutes.

The Taycan will make its global debut on 4 September 2019 via a livestream on the company’s online TV microsite. The reveal will also happen in three key locations: China, Canada, and Germany. Sales will commence from December 2019 onwards, with 20,000 units being produced for the initial year and more body styles like wagon/crossover coming in later on. The carmaker has also confirmed that the Taycan will make its way to Indian shores with an expected reveal at the upcoming Auto Expo and a launch in March 2020.