The 10th generation Toyota Camry is bigger, more powerful and looks quite different from the current generation 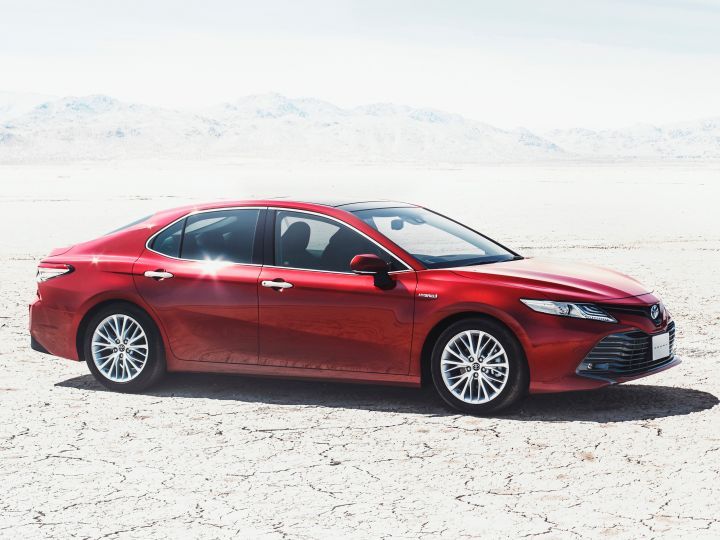 Toyota is all set to launch the all-new Camry tomorrow in the Indian market. With radical new looks, the Camry has truly evolved from an old-school luxury sedan to an edgy and high-tech vehicle. A big part of this can be attributed to Toyota’s new TNGA-K platform, the one which also underpins other cars like the Lexus ES. Driving the car will still be a hybrid powertrain which now gets more power. Even the cabin has been totally revamped and looks more luxurious than ever before.

From the front, you won't know it’s a Toyota, let alone assume it’s a Camry, if it were not for the badge. The 'Keen Look' design philosophy gives it a large front bumper with its horizontal slats which takes centre stage in the front. But the car also gets a sleek headlamp cluster with Bi-Beam LED headlamps and three strips of LED DRLs. The nose of the car is now lower and the overall dimensions have grown by 35mm in length, 15mm in width, 35mm lower in height and a 50mm longer wheelbase. These factors combined give the Camry a better stance.

Inside, you find an all-new cabin worthy of being in a Toyota flagship. The centre tunnel gets a 'Y'-shaped casing which holds the 8-inch touchscreen infotainment system which is connected to a 9-speaker JBL Dolby audio system. The ambient lighting runs along the dashboard crease and there is also use of a wooden trim to keep up the typical Camry charm. Other features include memory function for driver’s seat, rear armrest with a capacitive touch screen, 3-zone climate control, a leather-wrapped steering wheel with audio controls and cruise control and wireless charging.

Under the hood, you will still find a 2.5-litre petrol engine, which now makes more power, and an 88kW electric motor. Pairing the two is the next generation Toyota Hybrid System (THS II) and a Continuously Variable Transmission. Combined output for the system is 211PS of peak power and 202Nm of peak torque. The astonishing part, though, is the internationally claimed fuel efficiency figure of 33.4kmpl.

In terms of safety, the 2019 Camry gets collision avoidance assist package and Rear Cross Traffic Auto Brake, which automatically applies the brake if the vehicle detects another vehicle in blindspots at the rear left or right when the vehicle is reversing. Then there are the standard features like ABS with EBD, brake assist, vehicle stability control, traction control system, hill start assist and park assist.

The Camry Hybrid is expected to price close to the Rs 40 lakh mark and will continue to rival the Skoda Superb, Volkswagen Passat and the Honda Accord Hybrid. We will be driving it in a week’s time, so stay tuned for a review.