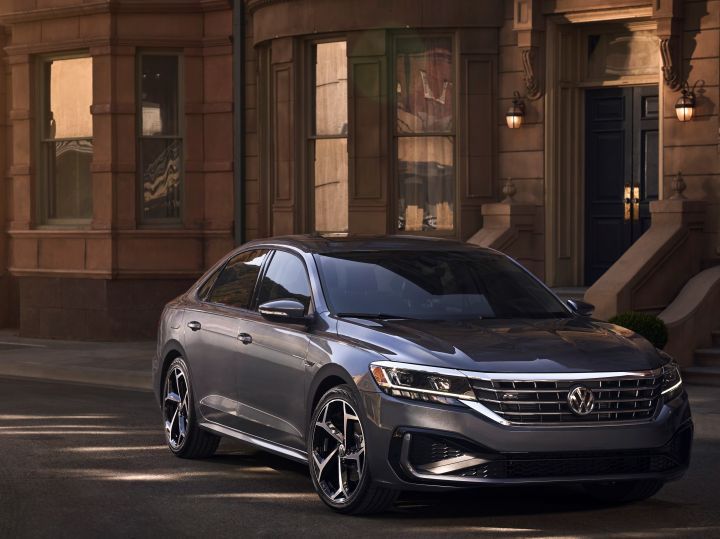 Volkswagen has unveiled the 2020 Passat at the ongoing North American International Auto Show in Detroit, US. While it continues to based on the same MQB platform as before, it gets a comprehensive cosmetic update, helping it stand out from the outgoing model. Volkswagen has even worked on the interiors to give the Passat a more premium cabin. An area they haven't made changes is the engine as the 2.0-litre TSI petrol motor has been carried forward for the US market. However, it now makes more torque than before, which will please the petrolhead in you. Overall, if you are a sedan purist and haven't switched to a crossovers yet, the Passat is now a more tempting option.

On the outside, the first change you notice is the new grille, which is taller than before and has a hint of the Arteon in the way it meets the headlamps. Not to mention, you get slim LED headlights and taillights as standard. The tail lamp cluster now beautifully aligns with the shoulder line and the bumper crease, while the Passat badge is now laid out across the width of the boot to make a stronger statement... I assume. The coupe-like roofline, called the “Tornado Line”, has been retained and makes the Passat look elegant. But if you do want to tip the scales to the bratty side, VW is offering a set of 19-inch alloy wheels that look oh-so-gorgeous.

Inside, there is no brattiness whatsoever. The cabin can be dressed in V-Tex leatherette or Nappa leather (whichever floats your boat) in the same connected horizontal air vent layout. The major update comes in the form of a new glass-covered infotainment touchscreen which supports Apple CarPlay, Android Auto and MirrorLink. Other features include heated front and rear seats, powered driver seat with memory function, and dual-zone climate control. A big update has been made in terms of standard safety as well. Every Passat now comes with Forward Collision Warning and Autonomous Emergency Braking, Pedestrian Monitoring, Blind Spot Monitor and Rear Traffic Alert. Other options in higher trims include Adaptive Cruise Control (ACC), Parking Steering Assistant and Automatic Post-Collision Braking System.

While the 2.0-litre turbocharged TSI motor in the US has been retained, a new torque converter combined with new software has allowed for a higher torque output. The engine now makes 174PS of peak power and 280.6Nm of peak torque. It still comes mated to a 6-speed Tiptronic automatic transmission. In India though, Volkswagen is likely to continue with the 2.0-litre TDI diesel engine.

Speaking of India, the 2020 Passat is likely to debut here in 2020 itself. It will continue to rival the Skoda Superb and the Toyota Camry and is expected to be priced close to Rs 35 lakh (ex-showroom) for the top-spec variant.