New BMW M5 Is The Quickest M Ever

In a straight line, it'll hold its own against a Porsche 911 GT3. Amazed? We aren't! 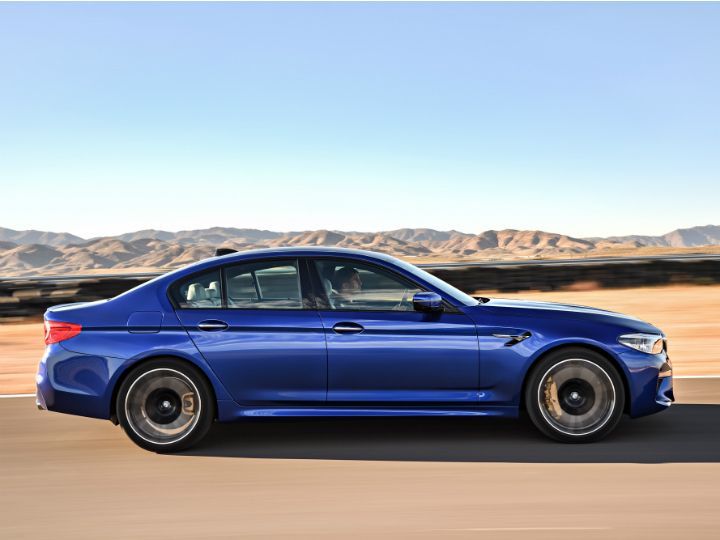 Yes, it's a big burly sedan. Yes, it can seat four; there's quite a lot of leather on the inside and there's enough tech in there to give the geek a complex. But the fact that it's outrageously quick is no surprise, really.

Under the hood lies BMW's 4.4-litre V8 engine (why did the V10 have to say goodbye?) that develops 600PS of power and a whopping 750Nm of torque. In case you're curious, yes this is the same engine that powers the F10 M5. But BMW claims there have been "significant revisions" including new turbochargers, indirect charge air cooling and increased fuel injection pressure. It also gets a map-controlled variable oil pump to ensure the motor gets its oil dose every time it needs it.

The Bavarian boffins say 600PS is "ample power" for the new M5. Nutters. Big numbers on paper mean smaller numbers in the real world - 0-100kmph is dealt with in 3.4 seconds, whereas 0-200kmph takes 11.1 seconds. Top speed is electronically limited to 250kmph, but you "can keep the fun coming" if you tick the M Driver's Package. This lets you wring the bi-turbo V8 to 305kmph, provided you have the roads and the balloons to do it. It'll do 9.5kmpl if you're careful, says BMW.

All the go-fastery is made possible by an 8-speed automatic transmission that -- for the first time in an M sedan -- sends power to all four wheels.  Now, BMW know AWD can be a bit boring and take away from the essence of M Performance. So, you get the option of switching to rear-wheel drive for some rubber burning goodness. In case you don't trust yourself with 750Nm being dumped on to the rear wheels, you can choose the 4WD Sport mode that lets you have a little bit of fun, if you pair it with the traction control's MDM (M Dynamic Mode).

In fact, the three modes of the traction control (DSC on, MDM, DSC off) and the three xDrive modes (4WD, 4WD Sport and 2WD) let you tailor the ferocity of the super saloon. You can go one step further and alter the suspension settings between Comfort, Sport and Sport Plus using the Variable Damper Control (VDC), and then select the engine's behaviour by choosing either Efficient, Sport or Sport Plus. I suck at math, so I can't tell you what's the total number of combinations you can play with.

If, like me, you'd rather have one button to do it all, you can. Actually, there are two of em. These buttons - called M1 and M2 - are placed on the steering wheel that lets you save a preset for your preference of engine, transmission, suspension and M xDrive modes, the DSC mode and Head-Up-Display settings.

And, as you might've seen in the pictures, the M5 looks like the 5 Series took part in a bodybuilding contest. Typical M elements including the large inlets up front, quad exhausts and the powerdome on the bonnet mark their presence. There's carbon-fibre reinforced plastic on the roof, that helps it shed a lot of weight. While BMW hasn't shared numbers, it does confirm that even with the AWD tech, the new M5 is lighter than the one it replaces.

We're expecting the M5 to make its debut sometime next year, with prices starting around the Rs 1.5 crore mark.