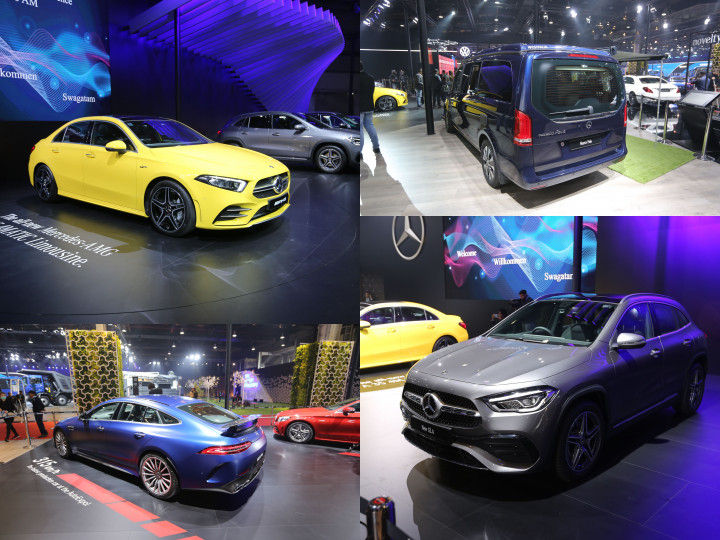 Mercedes-Benz was in fact the only luxury carmaker out of the famed German trio to participate in the 15th edition of the Auto Expo last week. But the three-pointed star made up for the absence of its competition with a solid lineup ranging from sedans to SUVs, MPVs and electric vehicles. And to top it off, Mercedes-Benz also showcased the fastest car at the expo in the form of the wild GT6 63 S 4-door coupe.

Want to shame some supercars while your kids witness the whole thing? We suggest this, the AMG GT  GT6 63 S 4-door coupe. It’s got 4 seats, 4 doors, plenty of room, all the creature comforts and a massive boot. But what makes it special is the 4.0-litre twin-turbo V8 that puts out a leisurely 639PS and 900Nm to all four wheels. Price to pay for all of this? Just Rs 2.42 crore (ex-showroom India).

Meet the ultimate version of the V-Class, the Marco Polo, which was launched at the Auto Expo 2020 for Rs 1.38 crore. There are two variants to choose from: Marco Polo Horizon and Camper.  The top-spec variant gets some rather interesting bits like a kitchenette, roof mounted tent, two beds and an uber luxurious cabin. Basically, this is a Mercedes-Benz out of which you can literally live.

The much-awaited Mercedes-Benz GLA SUV made its India debut at the Auto Expo 2020. What it packs are revamped styling, cabin and powertrain options. There are two BS6 engines on offer, 2.0-litre petrol and diesel. These engines are expected to be paired up with a 7-speed dual-clutch automatic gearbox. We expect Mercedes to launch the SUV in October with prices likely to start from Rs 43 lakh.

Mercedes showcased the A-Class sedan in India, also commencing its bookings. Launch is destined for June with the prices likely to begin from around Rs 40 lakh. It uses two 2.0-litre BS6 petrol and diesel engines. The styling and cabin design is now in line with the modern crop of Mercedes. Its main rival in India is the Audi A3 sedan.

Already launched in India at Rs 73.70 lakh, the LWB version of the GLE was also showcased at the Auto Expo. There are two variants on offer: GLE 300d and the GLE 400d Hip Hop Edition. The former uses a 2.0-litre diesel engine producing 245PS and 500Nm while the latter deploys a 3.0-litre six-cylinder diesel putting out a solid 330PS and 700Nm! It also comes loaded with all the bells and whistles, which you can find in detail here.

The EQC is the German carmaker’s flag-bearer for all-electric vehicles. And guess what, it is launching in April 2020. The EQC Edition 1886 is what’s headed our way. Highlights include twin electric motors churning out 408PS and 760Nm. Thanks to an 80kWh battery pack, it has also got a NEDC claimed range of 445-471 km. The SUV also supports fast charging enabling it to juice up from 10-80 per cent in 40 minutes.

Apart from these Mercedes-Benz also showcased the G 350 d, Maybach S650 and the Mercedes-AMG C43 Coupe.