The Mercedes-Benz EQS Is The S-Class Among EVs

Thanks to its stylish design, up-to-the-minute tech, and a long range, the EQS electric sedan is a worthy contender to the Tesla Model S 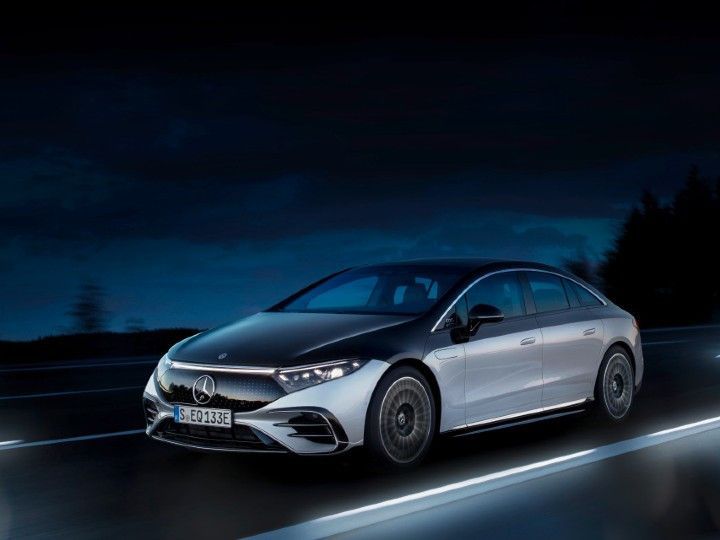 After a long wait, Mercedes-Benz has finally unleashed the EQS all-electric flagship sedan. Essentially an electric equivalent of the S-Class, the EQS blends slick styling with the latest tech.

But to only call it slick won’t be doing justice. The electric sedan is so clean, you’d mistake it for a one-piece body similar to the concept. It is the most aerodynamically efficient car to date, with a drag coefficient of 0.20cD. The sedan sports a two-tone colour scheme, much like the concept. A nice touch up front is a black panel flanked by tiny three-pointed stars that glow up at night. On the outside, you have the trendy connected rear taillights and alloy wheels ranging from 19 to 22 inches.

The MBUX infotainment system can be voice-controlled from any seat in the sedan. Then there’s the Adaptive Interior Assistant feature, which utilises cameras and sensors to monitor occupants’ behaviour. For instance, it automatically dims the background lights if the driver is looking at the front passenger screen, ensuring all the focus stays on the road ahead.

All in all, we think the interior is much more luxurious than the Tesla Model S.

Naturally, this being the S-Class of EVs, the rear-seat has been given utmost importance. While it misses out on the airplane- like lounge seating, the EQS comes with an optional pack, which offers four-way configuration and a heated and massaging function for the rear seat passengers.

Other premium features include a 15-speaker 710W Burmester sound system, augmented reality navigation, and an ‘ambience pack’ for sound, lighting, and aroma. If you find the 55.5-inch MBUX Hyperscreen a little too large, the base variant borrows the 2021 S-Class’s dashboard layout with the 12.3-inch MBUX digital driver’s display and the 12.8-inch central touchscreen infotainment system.

Based on Mercedes’s EVA platform, the EQS comes in two variants: EQS 450+ and EQS 580 4MATIC. The former has a single motor setup (pushing out 334PS and 458Nm) driving the rear wheels, whereas the latter has two motors (which push out 523PS and 856Nm) driving all four wheels. The 0-100kmph sprint is completed in 6.2 seconds (by EQS 450+) and 4.3 seconds (by EQS 580 4MATIC), with both the variants topping out at 210kmph. There’s rear-axle steering of up to 4.5 degrees, which adds to the electric sedan’s handling prowess. What’s more? We have learnt that another model, with up to 760PS of grunt, is in the works.

Both variants can be charged with a 107.8kWh battery pack. The Worldwide Harmonized Light Vehicles Test Procedure (WLTP)-claimed range is up to 770km. A 110kW DC fast charger can charge the sedan from 10 to 80 per cent in just 35 minutes. A 240V wallbox charger will do the same in over 11 hours.

Expect Mercedes-Benz to bring the EQS electric sedan in India only around 2022, considering there’s a range of models lined up for this year. The EQS will take on the Tesla Model S and Audi e-tron GT.