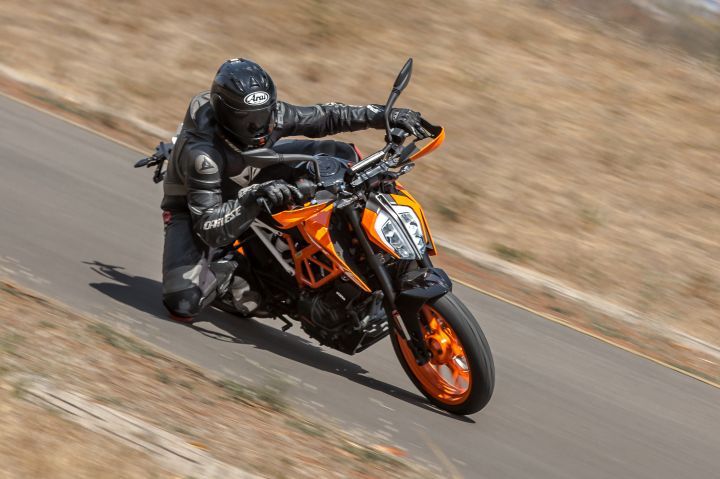 It might be in its preadolescent stage in the Indian context but believe it or not, the KTM Duke turns 25 this year. It was in 1994 that KTM shocked the world by building its first large-capacity single-cylinder four-stroke engine and stuck it in a naked motorcycle. To top it all off, it was given a name befitting royal status: the Duke. To know more about its heritage, you will have to stick around on ZigWheels.com. But in the meantime, the KTM Duke is quite popular in our office. Nearly every single one of us has gone gaga over it and a few of us own/ used to own one as well. So, here’re the boys' experiences with the KTM Duke in India.

KTM 390 Duke (Both generations) - Kartik
I have lived with, and loved, the first and second generation KTM 390 Duke. This affection and admiration is for completely different reasons. The first gen was a sweet talker. Its chassis cajoled end encouraged you to exploit the engine, to be a better rider. On the face of it the second gen seems to be even kinder and more indulgent, especially to the everyday rider. It will let you tour and commute better, and it is more feature-packed too. But when you start having more meaningful conversation, you notice a change in this Austrian’s tone. The cajoling has given way to taunting. What have you got? Think you are ready a big bike? No! You call that a fast entry? Pfft. Step it up. The second generation 390 Duke will make fools suffer. You quickly learn that point and shoot isn’t good enough. It’s time for finesse. The chassis and the uprated motor haul you to a level you didn’t think existed. After a year flitting in and out of this frantic and frenzied zone, the KTM is still asking me to man up. It’s a conversation we have every day, and one that hasn’t lost its charm one bit. But just to be safe, some mods have been slapped on, just in case that day should come. Until then, Happy Birthday KTM! We wish you don’t go sane just yet.

KTM 390 Duke - Shumi
8 years already? Sometimes I think time flies too fast. Sometimes I think KTM India just hasn't done enough in product terms to encompass a near-decade-long run the country. But I'm in no doubt that today, there's no motorcycle on the market that's better all-round for a fun ride than the KTM 390 Duke. And I should know — I've loved the 390 since I first rode it in Austria in 2013 at its global media preview. And I bought mine, a 2014 with white bodywork, from the launch. That's how much I enjoyed it. And it's been absolutely fantastic.

I'm not unaware that KTMs don't have a reputation for utter reliability but Ferocitas has been absolutely epic. Not even a blown bulb to report. Five years later, I ponder the chipped paint on the engine case. It's the only sign of age. Mechanically it's smooth (surprise), extremely fast and with a few mods, the funnest motorcycle I own. It's the one that gets ridden the hardest.

When the bike came out, I was convinced that the 390 was the widowmaker. It's the bike that was just fast enough to egg you on. And you needed to trust it and see it through. Or else.

It was also the bike that didn't tolerate riding casually or badly. Fluff gearchanges, brake too late, don't go fast enough in the wet and the 390 didn't flatter you at all. The 200 Duke and the 250 Duke are far sweeter in nature. But the 390 is a cat. It accepts you as a part of its life but it's very much its own self; you'll never really own it.

A huge part of this to me is the nature and scale of the performance. It's just right. It's enough for it to be hard to extract it all, all of the time. But its frighteningly quick responses and no sense of remorse makes riding it properly scary as well as intensely satisfying.

This is the kind of bike I've always wanted. And I'm glad I have it. It's been joined some very spectacular machinery in my garage over the years. But every single time I walk past the garage, Ferocitas quickens my heartbeat.

That in essence is what motorcycles should do. My KTM 390 Duke is essential for me.

KTM 390 Duke - Priyadarshan
Back in 2013, making the decision to buy the recently launched 390 Duke was a no-brainer. There was nothing else available at the time which offered a remotely similar price-to-performance ratio. So in Jan 2014, I got myself one - the last of the MY13 models, for just two lakh rupees on-road. But I really didn't imagine holding onto it for over 5 years. It's not been a trouble-free five years mind you. I've broken the front wheel multiple times, the shifter a couple of times, replaced the clutch plates and chain sprocket rather regularly, and the speedo still acts up. I have made some improvements though... the front brake master cylinder, sintered pads, levers and rear shock from the 2017 bike. The beauty of this has been just how affordable things are to repair or replace. But more than anything, even after regularly riding more powerful motorcycles, "Shukuji" has enough in store to keep me excited every time I wring open the throttle.

KTM 390 Duke - Arun
Honestly speaking, as a machine my KTM 390 Duke is among the less impressive bikes that I have ridden. Its riding posture is awkward, the saddle is rock hard, riding it in crawling traffic feels like managing five pitbulls on a leash simultaneously, and the stiff ride can rattle your backbone if you aren’t careful over potholes. And yet I absolutely adore my KTM as it has character, and loads of it. No matter how fast you ride, if the bike isn’t connecting or conversing with you then it remains a machine in my opinion.

Despite all its drawbacks, the 390 Duke always manages to make me grin every time the tachometer crosses the 5,000rpm mark. Once in the powerband, the bike just comes alive. It relishes to be ridden hard, and pops in a few surprise wheelies to keep the adrenaline flowing. The 390 Duke is a hooligan and the best part is that it’s proud of being one and doesn’t try to impersonate any other machine. And this was the main reason for me buying a pre-owned 390 Duke over the current gen motorcycle. Yes, the new bike is sharper, more refined and poised, but it isn’t a rogue like the older 390 Duke! If a motorcycle makes you equally excited for a short commute or a long ride then I feel you have made the correct choice, and I definitely did. As the KTM Duke celebrates its 25th anniversary, all I can say to the engineers, designers and every person behind the 390 project is: Thank you for creating a hooligan!

KTM 200 Duke - Ruman
‘Arancia’ happened to me in the summer of 2012. Not a very imaginative name, I know - it’s ‘orange’ in Italian; dunno why, because it’s Austrian, or Indian, depending on how you look at it. But having been fortunate enough to grow up on a diet of KTM motocross and enduro bikes from my early teens (I have rich friends, okay?), being bitten by the 200 Duke bug was as easy a decision as a 20-something year-old me could’ve made. No other motorcycle I’ve owned has had its odometer rack up miles the way Arancia did, and I was quick to order some tasteful aesthetic bits from the candy store that KTM’s PowerParts division is (rich friends…). The Duke sliced my commute time into an exact half, in the process becoming a source of humongous annoyance to everyone else who had the misfortune of sharing road space with me. I loved it. No, I still love it! And selling it - in the hope of buying a 390 Adventure (which still hasn’t arrived...) was a decision that creates a 200 Duke-sized lump in my throat to this day.