What To Expect From Team Orange At EICMA 2019

KTM is going to unveil some highly anticipated models in Milan 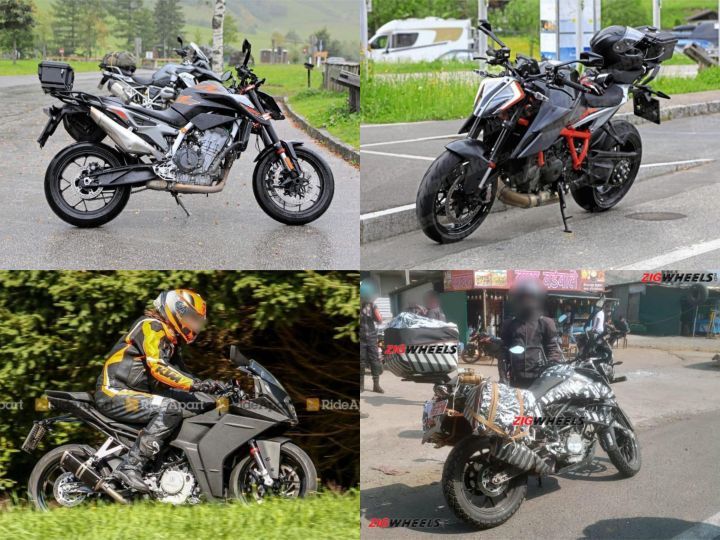 With the Japanese manufacturers doing their fair share of unveiling at the Tokyo Motor Show last week, it’s now the turn of the European brands to reveal their latest creations. One of the most action-packed stalls at EICMA this year is expected to be KTM, with a lot of exciting motorcycles scheduled to be officially unveiled. Let’s take a look at what the orange team has in store for us:

Yes, the time is finally here. After all the rumours and all the spy shots, KTM will be officially unveiling the 390 Adventure at EICMA. This unveiling is likely to be followed up with the official India showcasing of the motorcycle at India Bike Week in December. We already know that the 390 Adventure will feature the same engine that does duty in the 390 Duke and RC 390, but it is likely that the state of tune and gearing will be more suited to the motorcycle’s purpose. The motor will be updated to meet Euro 5/BS6 emission norms as well.

Adjustable long travel suspension at both ends, and a 19-inch front/17-inch rear alloy wheel combo will help the adventure live up to its name, while the colour TFT screen is expected to be carried over from the Duke. Once launched, the 390 will fill the void between the Royal Enfield Himalayan and BMW G 310 GS, and we hope for a price tag of under Rs 3 lakh (ex-showroom).

At the opposite end of the displacement scale, KTM is also expected to bring us a new 1290 Super Duke R. The brand has been teasing this new model for a few weeks now, so the anticipation is high, as are the expectations. With recent nakeds from Kawasaki and Ducati taking things to the next level, we expect KTM to come out with all guns blazing as well.

The 2020 iteration of the Super Duke is expected to put out more power than ever before while still complying with Euro 5 emission norms. The update is comprehensive, with spy shots revealing that the upcoming bike will get a new chassis, subframe, exhaust system and instrument cluster. KTM’s teasers also indicate a healthy dose of carbon fibre and some very high-spec underpinnings. We can’t wait to see KTM’s maddest bike get even wilder.

While we’re on the subject of Dukes, we’ve also spotted KTM testing a slightly different version of the 790 Duke. This prototype featured higher-spec suspension and braking components, and we expect it to have a slightly higher power output as well. Whether this is a higher-spec variant of the 790 Duke or an update for the next model year, only time will tell. The current bike is not Euro 5-compliant and is therefore due for an update soon.

Coming back to the 390 range, KTM’s RC 390 supersport is due for an update as well. While the 390 Duke has received features like LED headlights and a TFT instrument cluster with bluetooth connectivity, the RC soldiers on with its projector headlights and LCD display. The engine is also in need of a Euro 5 update. A new RC has already been spotted testing. In addition to the engine being made compliant, the RC will also get a major design overhaul, with the twin projector headlights being replaced by a single unit. After being unveiled at EICMA, we expect the 2020 RC 390 to reach our shores early next year, ahead of BS6 emission norms kicking in.