KTM’s Maddest Bike Is About To Get Madder! 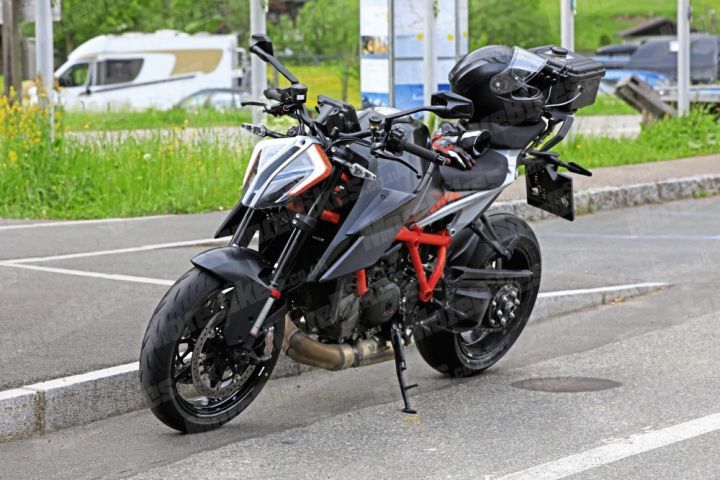 It’s been a long time coming. KTM has finally teased a short clip of the 2020 1290 KTM Super Duke R. The video cleverly showcases bits and pieces of the bike being put together by a couple of KTM technicians. Though there isn’t much to see, the clip flaunts the bike’s carbon-fibre parts, high-spec components, and a couple of resigned elements. We’ve already spoken about the bike in-depth when it was spotted testing in Austria in early July 2019.

But just in case your memory’s a bit hazy, here’s our perspective on the upcoming 1290 KTM Super Duke R.

For starters, the bike employs a new trellis frame that seems to be a derivation of the KTM RC8 superbike and even gets a lower engine mount and brace. The subframe too has been changed to a cast unit instead of the earlier trellis. The new exhaust design looks longer and neater than before and connects to a beefier exhaust end can.

This, paired with the slightly forward-positioned  1,301cc mill, suggests that the bike may comply with Euro5 emissions. The engine is expected to produce more power as well as have an electronics package that will keep the rather brutish motor on a leash at all times. The current model, for instance, belts out 176PS of peak power and 130Nm of torque!

The streetfighter's suspension setup from WP is expected to be updated as well, possibly to a Pro configuration, much like the recently spied KTM 790 Duke R. Besides, the brakes may be updated with Brembo Stylema calipers.

Also Read: Major Design Overhaul In Store For The Next RC 390

It’s safe to say that KTM has left no stone unturned. Even the instrument console receives a massive upgrade in the form of the brand’s “fish finder” TFT dash and new switchgear to match. From a design standpoint, the 2020 model features restyled wheels and sharper tank extensions that seem to double as radiator guards.

The aforementioned updates should keep the bike in fighting shape and could possibly give it an edge over its competition—the Honda CB1000R Plus, Yamaha MT-10, the upcoming Ducati Streetfighter V4, Aprilia Tuono V4 1100 Factory, and the bonkers 200PS-plus MV Agusta Brutale Serie Oro. Expect KTM to take the wraps off the 2020 KTM 1290 Super Duke R at the EICMA motorcycle show this November.

While the 1290 Super Duke R is unlikely to make it to India anytime soon, we can expect the company to introduce the litre-class streetfighter in India in the future considering the growing premium motorcycle segment.