It takes the crown of the world's fastest SUV. We aren't surprised. 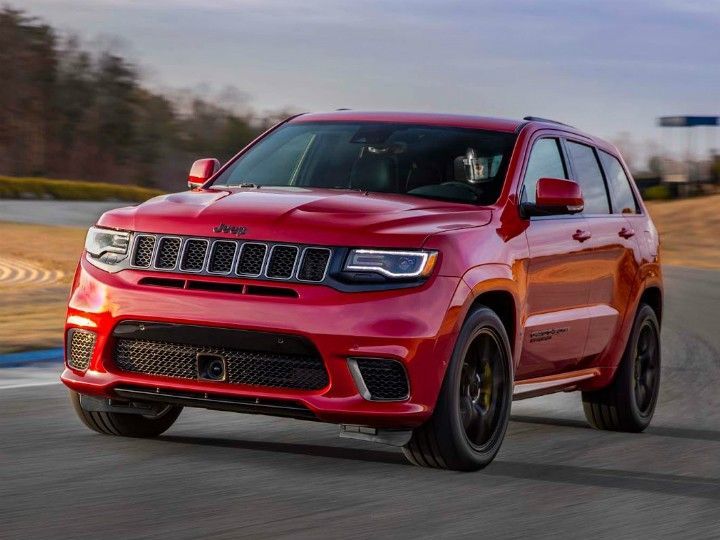 'The World’s Fastest SUV' is the tag put forward by the American SUV maker Jeep with the new Cherokee Track Hawk. This claim is refuted by many as the Tesla Model X can do the same 0-100 kmph sprint in 2.9 seconds. Jeep has clarified that it follows the ward’s report of “Utility Vehicle” segmentation, that classifies the Jeep Grand Cherokee as a Middle SUV (Sport Utility Vehicle), while the Tesla X is a Middle Luxury CUV (Cross Utility Vehicle)". Whatever the claims may be, the Cherokee TrackHawk is one of the fastest production vehicles, regardless of the segment.

The TrackHawk sits an inch lower than the standard Grand Cherokee, but still has a ground clearance of 210 mm and rides on 20-inch wheels. There is an option to upgrade to light-weight aluminium rims, which apparently saves 12 pounds. To put the power down efficiently, the TrackHawk gets two rubber options - Pirelli Scorpion Verde all-season and Pirelli P Zero three-season tyres. Differentiating the TrackHawk from the standard Cherokee is the absence of fog lamps, which has now been replaced with pipes to channel cool air into the engine bay. The ‘TrackHawk' badging on the tailgate and the quad exhaust pipe ensures that it stands out from its regular variant.

The Cherokee Track Hawk is powered by a 6.2-litre V8 petrol motor which is borrowed from the Dodge Challenger and the Charger Hellcat. This puts out 707PS of maximum power and a brutal 874Nm of peak torque. This super-charged motor has been paired with an all-wheel-drive system and an 8-speed automatic transmission. The result of all this: a 0-100 kmph time of 3.5 seconds and a quarter-mile time of 11.5 seconds! The top speed is rated at 290 kmph and don’t forget that this is an SUV that weighs close to two and a half tonnes.

Braking is taken care of by 15.75-inch Brembo vented brakes (largest to be fitted in a Jeep) with six-piston callipers up front and 13.78-inch vented rotors with four-piston callipers at the rear. The TrackHawk can be brought to a standstill from 100 kmph in 34.7 metres. The Cherokee TrackHawk rivals the likes of performance SUVs from Porsche and Range Rover. It also competes with uber-luxury SUVs such as the Bentley Bentayga, Maserati Levante and the upcoming Lamborghini Urus. The TrailHawk is expected to be priced at around $80,000 (Rs 51.59 lakh) in the USA, and it is uncertain whether Jeep will bring the TrackHawk to India. We wouldn't mind if they did, though.