Ahead of its possible debut at next week’s New York Auto Show, high quality images of the 2017 Jeep Grand Cherokee Trailhawk have surfaced online 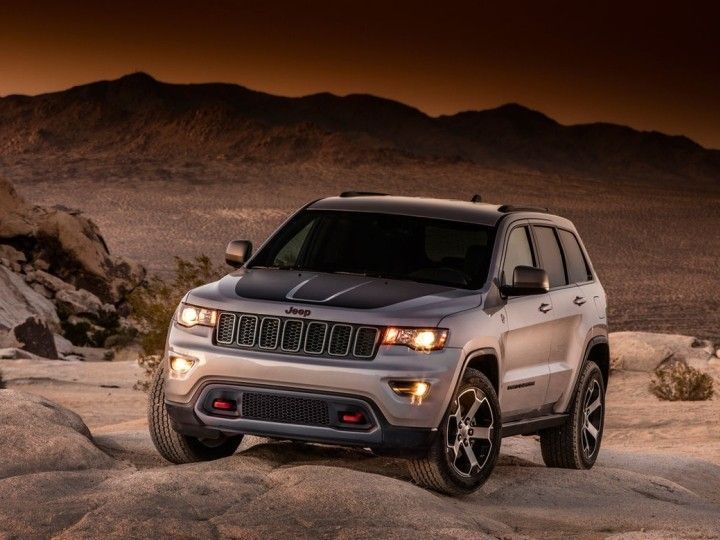 Images of what is most definitely the new Jeep Grand Cherokee Trailhawk have surfaced on the web ahead of its possible unveil at next week’s New York Auto Show. Obtained by Jalopnik from unnamed sources, the images depict what looks a lot like the Trailhawk that was produced as a special edition for the 2013 model year. Thanks to the similarity in Jeep’s naming nomenclature, we should also point out that this not the hotly-anticipated and much-rumoured Trackhawk.

From what we can see in the pictures, this Grand Cherokee variant follows the usual Trailhawk recipe of matte black bonnet graphics, exposed red tow hooks and grey highlights instead of chrome trim on other models. Also fitted is a cleaner front bumper design from the 75th Anniversary Edition models and machine-finish alloy wheels shod with what look like higher-profile, off-road Goodyear Wrangler tyres, while inside there appears to be leather and suede upholstery topped off with red stitching. Red Trailhawk and Trail-Rated badges complete the look.

There’s very little information accompanying the images, but it is understood that the Grand Cherokee Trailhawk’s powertrain options reportedly include a 295PS and 353Nm 3.6 litre Pentastar petrol V6, a 240PS and 569Nm 3.0 litre EcoDiesel V6 and a 360PS and 529Nm 5.7-litre HEMI petrol V8, all mated to an eight-speed ZF automatic transmission.

Jeep last sold a Trailhawk version of the Grand Cherokee in 2013, prior to the big SUV gaining its current facelift. Back then it teamed 18-inch alloys and Goodyear Silent Armour all-terrain tyres with the brand’s Quadra-Lift II 4×4 system, air suspension and a 3.0-litre turbo-diesel V6.

We reckon Fiat Chrysler will release specifications and more details probably as early as next week in New York, or sometime later.