China's Great Wall Motors is set for an India debut with its Haval brand, which has a host of SUVs for almost each important SUV segment in the country. Here's a look 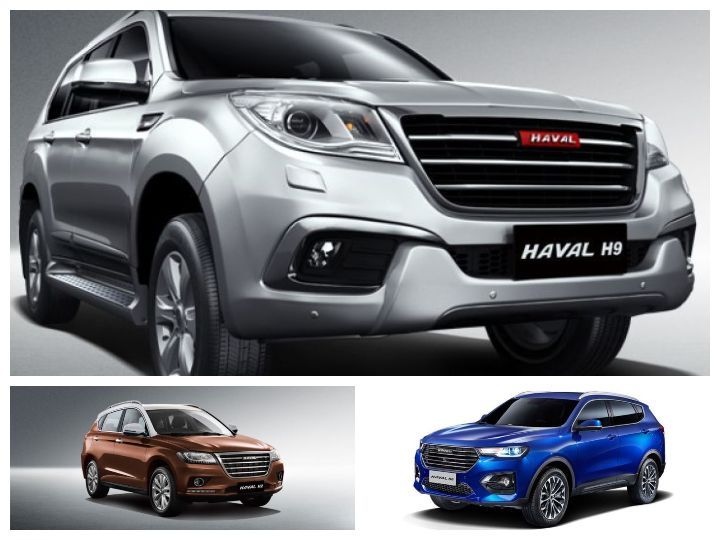 Great Wall Motors (GWM) will be making its India debut with Haval. The Chinese giant has proposed a plan to set up a factory in Sanand, Gujarat, for an estimated value of Rs 7000 crore. Haval is one of the leading SUV manufacturers in China. It has established models like the H6, a MG Hector rival, one of its highest selling SUVs in China. Apart from that, the SUV maker has some important models like the H2, a Creta and Seltos rival, and the H9, a Ford Endeavour and Toyota Fortuner rival. Haval will be showcasing its portfolio at Auto Expo 2020 and will be launching it in India in the coming years. Here’s what to expect from the three SUVs.

The Haval H2 is a midsize SUV that’s equivalent to the Kia Seltos and Hyundai Creta in India. The design of the H2 is rather plain jane, especially the interiors, where it looks like the 90’s. The H2 needs to have a strong design for making a first impression and it lacks that. However, if you want your SUV to be feature-loaded, the H2 comes with features like an MP5 touchscreen infotainment system, dual-zone climate control, powered driver’s seat, multi-info display, cruise control, sunroof, keyless with push button start as well as ambient lighting.

Under the hood, the H2 comes with a Euro 5-compliant 1.5-litre T-GDI petrol powertrain that develops 150PS of power and 210Nm of peak torque. Transmission options include 6-speed manual and automatic options and power is sent via the front wheels. Just like the Renault Duster, the H2 can also be had with an all-wheel drive variant. However, Haval might not offer it here to keep costs in check. However, diesel fanatics will be disappointed that the H2 doesn’t come with a diesel engine.

If you want a slightly bigger SUV than the H2, there’s the  new H6, a midsize SUV that rivals the MG Hector, Tata Harrier and Mahindra XUV500. The Haval H6 is one of the best selling SUVs in China. Could it repeat the same success in India? The specs on paper don’t disappoint. The Haval H6 looks premium inside-out and comes with features like digital driver’s display, a 9-inch touchscreen infotainment system, dual-zone climate control, cruise control, panoramic sunroof, powered front seats, heated steering wheel and all-LED exterior lighting. While the SUV is loaded with features, it misses out on Android Auto and Apple CarPlay, a major miss. However, most Chinese cars don’t come with this feature and Haval might offer the India-spec car with it.

That said,  the Chinese-spec H6 comes loaded with a plethora of safety features like a 360-degree camera with rear parking sensors, blind spot detection, lane departure warning, cross traffic alert and ESP. The Haval H6 comes with two Euro5-compliant petrol engines: a 163PS 1.5-litre T-GDI and a 190PS 2.0-litre T-GDI. Both engines send power to the front wheels and can be had with a 7-speed DCT only. Negatives here include the fact that the H6  doesn’t have a diesel engine in its lineup. Another bummer is the fact that you don’t bet a manual gearbox or an all-wheel drive variant in the H6.

Haval also has a full size SUV called the H9. Recently unveiled at Malaysia, the H9 has all the right ingredients of a full-sized SUV. It is built on a ladder-frame chassis, comes with butch looks and has a premium cabin. Just like a typical Chinese car, it comes loaded with features like digital dials, touchscreen infotainment system, dual-zone climate control, sunroof, ventilated and massaging front seats with power adjustability as well as terrain modes. Safety features onboard are seven airbags, ABS with EBD, front and rear parking sensors, electronic stability control, hill descent control and electric parking brake with auto hold function.

The H9 comes with a sole 2.0-litre T-GDI petrol engine that develops 215PS of power and 324Nm of torque. It comes mated with a sole 8-speed automatic transmission and sends power to all four wheels. There are some negatives though. While the lack of a manual gearbox may not hold it back, the lack of a diesel engine is a serious disadvantage. For reference, the petrol-only Mitsubishi Outlander has sank without a trace.

While the Haval SUVs does look promising, all of them have chinks in their armour. The major one being the lack of a diesel engine as the SUV segments in India are majorly dominated by diesels. Then there is the lack of Android Auto and Apple CarPlay, a major miss in such well equipped models. However, if Haval gets their homework right with a concrete sales and aftersales centres and attractive pricing, there is a high possibility that we can see a repetition of MG Motor India and Kia Motors.