Does the new Harley-Davidson Pan America 1250 live up to the hype? 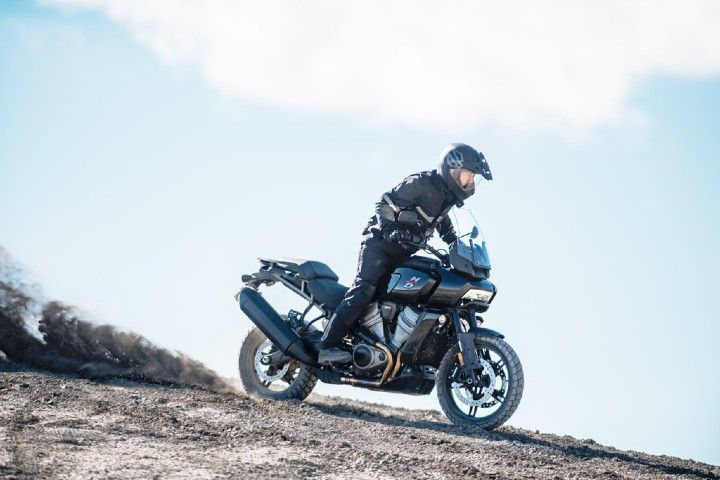 Harley-Davidson is known for its laidback cruiser motorcycles but in an attempt to change this perception, the American giant has unveiled its first off-road motorcycle, the Pan America 1250. You can read our story for full deets. While the thought of Harley-Davidson’s first-ever adventure motorcycle is exciting as it is, here are the top five interesting things you need to know about the new Pan America:

Even though it’s a Harley, the Pan America looks like a true ADV with its tall stance and rugged appeal. It comes with full-LED lighting with LED indicators, alloy wheels, a blacked-out exhaust, and premium-looking golden exhaust pipes. It also gets a rear luggage rack and a black bash plate. It is available in two colours: Vivid Black and River Rock Gray.

In related news, Honda will soon launch a new ADV motorcycle in India.

Harley-Davidson has gone all out in the technology department. The Pan America 1250 gets five pre-programmed riding modes (Road, Sport, Rain, Off-road and Off-road Plus), IMU, cornering ABS, traction control, hill hold control and even engine braking control, all accessible through a 6.8-inch coloured TFT instrument cluster. Along with this, the motorcycle also features Bluetooth connectivity via Harley’s dedicated app which enables music controls, call controls, and navigation.

The Harley-Davidson Pan America is powered by an all-new Euro-5 compliant Revolution Max 1250 engine. The 1252cc liquid-cooled V-Twin motor churns out 152.2PS and 127Nm. The engine features Variable Valve Timing (VVT) and Harley claims it spreads the powerband throughout the rev-band along with improving the low-end grunt. For a smooth experience, Harley has also thrown in internal balancers for the engine. To top it off, the motor is mated to a 6-speed gearbox with a slip-and-assist clutch.

Just like with every other aspect, Pan America screams ADV here as well. It rides on 19-/17-inch tyres shod with dual-purpose Michelin Scorcher rubber. As for suspension duties, the bike gets a 47mm inverted fork with an aluminium triple clamp and a monoshock, both fully adjustable. Braking is via 320mm twin-discs up front and a single 280mm disc at the rear. The kit is impressive, but with a kerb weight of 242kg and a seat height of 869mm, the Pan America doesn’t sound easy to live with.

If the standard Pan America doesn’t excite you, its Special variant definitely will. Over the standard stuff listed above, the Pan America 1250 Special features two customisable riding modes, a tyre pressure monitoring system, steering damper, heated grips, and optional spoke wheels with tubeless tyres. Along with this, the Special gets a Showa 47mm BFF fork and a Showa Balance Free Rear Cushion monoshock, both electronically adjustable and semi-active units. Thanks to the updated suspension, the motorcycle gets an optional Adaptive Ride Height feature which can lower the seat height to 830mm, making it pretty accessible. For reference, the KTM 390 Adventure’s saddle height is 855mm. Lastly, the Pan America Special is available in three colours: Baja Orange, Gauntlet Gray Metallic and Vivid Black.

The Pan America 1250 is expected to hit Indian shores somewhere around mid-2021 and when it does, it will be a costly proposition since Harley will import it as a CBU initially. However, we might see a switch to CKD units as Hero MotoCorp looks to set up a new division for Harley-Davidson.