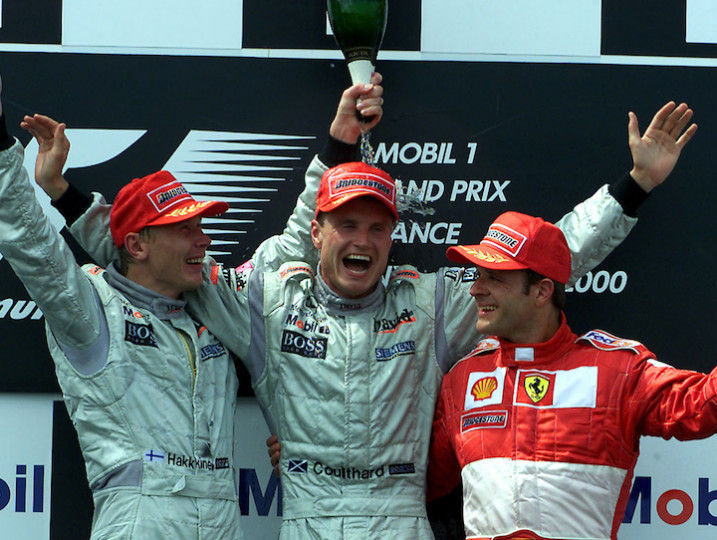 Zigwheels’ Schumacher 2000 series looks back to crucial moments that happened on this day, twenty years ago during Michael Schumacher and Ferrari’s historic title winning season. You can read the previous two features here and here.

Twenty years ago, the French Grand Prix was an established fixture of an F1 season regardless of the venue it was held at. With good reason too, as the first motor racing event bearing the title of Grand Prix was the French GP in 1906.

From 1991 to 2008, the venue for the French Grand Prix was the Circuit de Nevers Magny-Cours. A racetrack that Michael Schumacher had taken to like the proverbial duck to water. Before the 2000 edition, the German had triumphed four times at the circuit already, twice with Benetton and twice with Ferrari.

Coming into the 2000 French GP, Schumacher had won five of the season’s first eight races. A broken exhaust pipe that melted his Ferrari’s rear suspension at the Monaco Grand Prix led to his first retirement of the season. McLaren-Mercedes’ David Coulthard picked up the spoils to win and score his second victory of the season.

However, Schumacher bounced back from that disappointment to win the Canadian Grand Prix ahead of teammate Rubens Barrichello. Two-time defending champion Mika Hakkinen was only fourth and Coulthard was a lowly seventh, which meant no points as they were only awarded to the top six finishers at the time in a 10-6-4-3-2-1 format. Schumacher led the drivers’ championship having scored 56 points with Coulthard second on 34 and Hakkinen scoring 32 points. Ferrari were leading the constructors’ championship with 86 points to McLaren’s 66.

And yet, after the next five rounds of the championship following Canada, Hakkinen led the driver’s championship by six points from Schumacher and McLaren were eight points clear of Ferrari in the constructors’ championship. How did that happen, I hear you ask? Based on what today’s F1 fans say, Schumacher and Ferrari dominated F1 from 2000 to 2004 didn’t they?

Well, as it turns out, a driver and team combo that won the last two F1 drivers’ and constructors’ championships were no pushovers. Especially since they enjoyed continuity with the driver pairing - Hakkinen and Coulthard had been teammates since 1996 - and also continuity with the technical regulations since 1998. Add to that mix Adrian Newey, arguably the greatest F1 car designer of all time, and you have an obstacle that stands its ground.

The 2000 French GP marked the start of McLaren’s fightback and a five race winless streak that almost scuppered Schumacher’s aspiration to beat Hakkinen to winning three F1 titles. Ferrari were the defending constructors’ champions but it was the drivers’ title that they truly coveted, having not had a racer in scarlet lift the crown since 1979.

It all seemed like smooth sailing for Schumacher as he managed to qualify on pole position. Coulthard was just 0.102 seconds slower and was in a fighting mood. Prior to the 2000 Spanish Grand Prix, the Scotsman had survived a plane crash in which both the pilot and co-pilot were killed. Visibly shaken at not being able to help in that situation, Coulthard took second place in that race behind Hakkinen.

With a new appreciation for life, as he put it, and a much improved McLaren MP4-15 than the one at the beginning of the season, Coulthard was confident that he had the pace to challenge over a 309km race distance. Mika Hakkinen was fourth on the grid, over 0.4 seconds on the grid behind the other Ferrari of Rubens Barrichello.

McLaren had a trick that was expected to help them cope with the summer race. Periscope vents on the car’s sidepods aided in cooling and this became a crucial factor later in the race. The race also marked the start of Ferrari’s issues with rear tyre conservation. This was still the era of unlimited budgets and testing, and McLaren had out-developed Ferrari with their rear suspension that aided in stretching the performance of the rear tyres of their car.

Coulthard started the 72-lap race better than Schumacher, but the German gave the Scotsman his notorious ‘Schumacher chop’ as he moved across the circuit to slow Coulthard down. Being forced to back off allowed Barrichello to pass Coulthard and Schumacher sped off into the distance. Barrichello was playing the team role by slowing down Coulthard and Hakkinen but DC was able to pass the Brazilian on lap 22. Hakkinen was fourth as Ferrari and McLaren dominated the sharp end of the classification. The lead four runners - Schumacher, Coulthard, Barrichello and Hakkinen - completed their first refuelling and tyre stops by lap 25. Hakkinen had managed to get the jump on Barrichello but the focus was on the two leaders, Schumacher and Coulthard.

Coulthard rapidly started to close up on Schumacher and after setting the fastest lap of the race, was within striking distance by lap 32. Two laps later was when we got to see one of the famous moments from that momentous 2000 F1 season. After an attempt to pass Schumacher was foiled by the German running Coulthard wide at the tight right-hand Adelaide Hairpin, the Scot very clearly held up his right middle finger in the direction of Schumacher.

The German was only able to stay in front for another six laps before Coulthard made his move on the inside of Schumacher’s Ferrari F1-2000, which was now under threat from the McLaren piloted by Hakkinen. The Finn kept up the pressure on Schumacher but was unable to pass both before and after the pair made their second pit stop on lap 43. Barrichello was rendered a non-factor after his pit stop on lap 44 was bungled by the Ferrari pit crew.

By lap 53, the rear tyres on Schumacher’s Ferrari had given up the ghost and were degrading noticeably faster than those on the McLaren’s of Coulthard and Hakkinen. The Scot was in a race of his own by this point but Schumacher was struggling to keep Hakkinen behind him. By lap 59, Schumacher’s Ferrari sputtered to a halt due to an engine failure. The Mercedes-Benz engine in the McLaren’s was running just fine thanks to McLaren’s periscope heat vents.

Coulthard took victory from Hakkinen by almost 14.8 seconds while Barrichello was third, another 18 seconds adrift. The championship was looking a lot different now. Schumacher still led the points standings but was stuck on 56 points while DC was only 12 points behind him after his third win of the season. Hakkinen was another six points adrift of his teammate while Barrichello was six points behind Hakkinen.

Ferrari’s lead in the constructor’s championship was just six points now. The Italian squad had 88 points by the end of the 2000 French GP and McLaren had 82. And just to show you how far ahead of the pack Ferrari and McLaren were, third placed Benetton had scored just 18 points! The misery was not yet over for Schumacher and Ferrari, though. Opening lap incidents would lead to retirements for Schumacher in the next two rounds in Austria and Germany. Hakkinen would win in Austria and finish second in Germany before winning the next two rounds in Hungary and Belgium while Schumacher could only manage second place.

Anyone who, in the present time, thinks Schumi and Ferrari won the 2000 championship in a cakewalk are badly mistaken. And that will become even clearer in the next installment of this series.