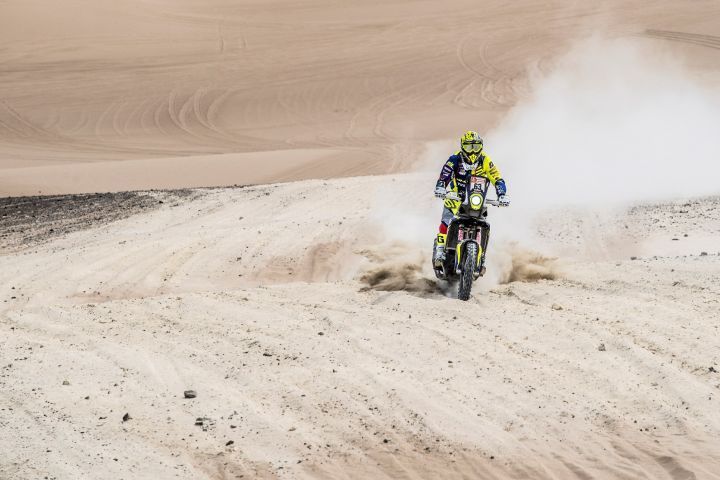 Day two has ended on a big high for Sherco-TVS Racing as Dakar rookie Lorenzo Santolino was 12th fastest on the day. He was 25th at the end of stage 1 but his brilliant stage two time was able to propel him to 13th spot overall.  Teammate Adrien Metge too had a good day in the office as he was 16th on the day, 18th overall.

Aravind had a promising day two as the former National Supercross and rally champion improved over the course of the day to end his stint in 60th position. He is now 61st overall, one spot ahead of teammate Michael Metge, who was on the receiving end of severe misfortune. Michael was one of the fastest riders on day one but he dropped down the order and headed to fight back over the course of the day.

Hero MotoSports managed to put in a consistent run on day two. It might not be their strongest day, with mechanical issues plaguing two of their three riders after all, but they have to take solace in the fact that all three of their riders completed the day, one of them in a strong position still. Oriol Mena continues his stunning Dakar journey as he managed to earn 17th position on the day. He now finds himself in 16th spot in the overall classifications.

After a strong opening day, Santosh had a tough day on the saddle of his 450RR with clutch issues, as he could only manage a 37th place finish on stage two. He now finds himself 13 spots lower than day 1 in 33, just one behind teammate Joaquim Rodrigues. J-Rod is still finding his rhythm on two wheels as the Portuguese had fuel pump issues. Despite that, he was 34th fastest at the end of stage 2.

KTM has hit back. 2018 winner Matthias Walkner won the day’s stage convincingly as he was close to half a minute quicker than HRC’s Ricky Brabec. High flying Honda rider Joan Barreda claimed the final podium spot on the day while KTM’s Toby Price was three minutes off his teammate.

Barreda continues to lead the rally but his gap over the field has been reduced to just a minute and a half as Walkner climbs up several spots to second. Brabec is just two seconds off Walkner in third. Husqvarna’s Pablo Quintanilla is now fourth with KTM boys Price and Sam Sunderland right behind. Adrien van Beveren is still the highest positioned Yamaha in the rally, in seventh.

Nine-time WRC champion Sebastien Loeb won his first stage of 2019 in his Peugeot DKR 3008. Loeb is running a privately funded effort since Peugeot pulled out of the mega rally after winning yet another Dakar in 2018. Nani Roma’s Mini was just eight seconds slower over the course of the day while Bernhard Ten Brinke took third spot in his Toyota Hilux. Early pacesetters Nasser Al-Attiyah and Carlos Sainz had troublesome affairs today which saw them slip way down the order.

Thus, there was a major shake up at the top of the overall leaderboard as Giniel de Villiers leads Ten Brinke for a Toyota 1-2. The two are separated by a narrow margin of just 28 seconds. In fact the top four are within a minute off the leader. Roma is now in third with fellow Mini driver Yazeed Al Rajhi just behind the Spaniard. Loeb is a further minute behind Al Rajhi but the Frenchman has made serious efforts to improve his winning chances. Defending champ Carlos Sainz has dropped down to sixth as Al-Attiyah now finds himself in eighth. Dakar legend Stephane Peterhansel has slipped further down the order to 13th. He will need to step up his game in case he wants to add to his already impressive 13 Dakar wins.

The rally intensifies here on as the competitors face a new challenge in the form of the Acari dunes. They have close to 800km to cover, of which 331km will be distance of the timed section.