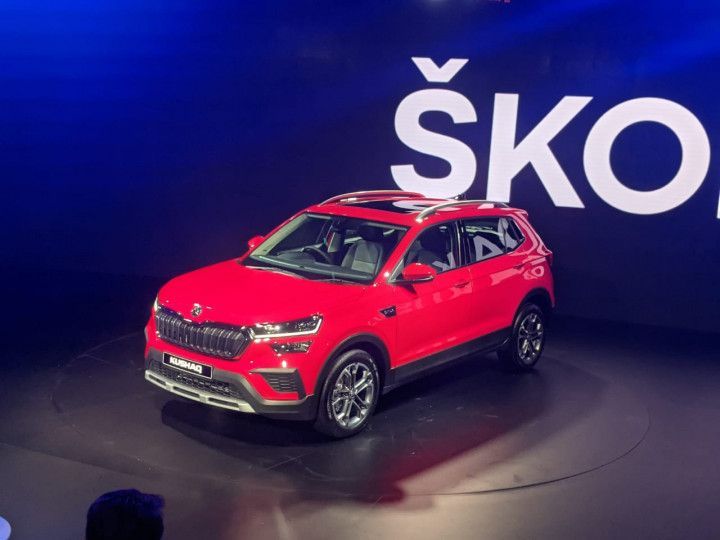 Skoda Auto India has globally unveiled the Kushaq compact SUV. The Kushaq ushers a new era for Skoda Auto Volkswagen India as the first product under the carmaker’s India 2.0 strategy. Skoda’s first made-in-India SUV is underpinned by the MQB-A0-IN, Volkswagen Group’s localised version of the MQB-A0 platform. In fact, Skoda says the Kushaq boasts up to 95 percent localisation. The Kushaq will sit in the hotly contested compact SUV segment that features stalwarts such as the Hyundai Creta and Kia Seltos. It will be offered in three variants: Active, Ambition, and Style.

The Kushaq is a smart-looking vehicle with good proportions. Familiar Skoda bits such as the butterfly grille and L-shaped LED tail lamps with crystalline detailing make their presence felt. The LED headlamps with the fog lamps placed right below take inspiration from the Karoq. The round wheel arches with body cladding are nicely filled by 17-inch alloy wheels.

Also Read: What Does ‘Kushaq’ Mean?

Even the interior layout is neat and minimalistic with all the controls in the right places. The dashboard is finished in a dual-tone black-white scheme. It’s dominated by a large 10-inch infotainment system through which almost all the features can be accessed. Unlike the concept which came with a digital driver's display, the production-spec model is equipped with analogue dials. Other highlights include a two-spoke steering wheel and touch-based climate controls.

In terms of features, the Kushaq comes with connected car tech, a touchscreen infotainment system, a six-speaker sound system with subwoofer, automatic climate control, ventilated front seats, a wireless phone charger, cruise control, a single-pane sunroof, ambient lighting, automatic headlamps and wipers, and a cooled glove box. Safety is covered by up to six airbags, ABS with EBD, parking sensors with a camera, and a tyre pressure monitor. Kudos to Skoda for offering electronic stability control as standard across the range.

The Kushaq is offered with two turbo-petrol engines: a 1.0-litre three-cylinder unit and a 1.5-litre four-cylinder motor. The larger 1.5-litre unit is locally assembled to keep costs in check, but Skoda hasn’t cut corners. It gets cylinder deactivation technology as well as idle auto start-stop functionality. Both engines are mated to a 6-speed manual transmission, but rely on different automatic transmissions.

If you want diesel power, you will need to look elsewhere as the Kushaq will only come with turbo-petrol engines.

Bookings of the Skoda Kushaq will begin from June this year. It's likely to be priced from Rs 9 lakh (ex-showroom). Its primary competition will come from the Hyundai Creta and Kia Seltos, but it can also be considered an alternative to the Maruti Suzuki S-Cross, Renault Duster, and the Nissan Kicks.