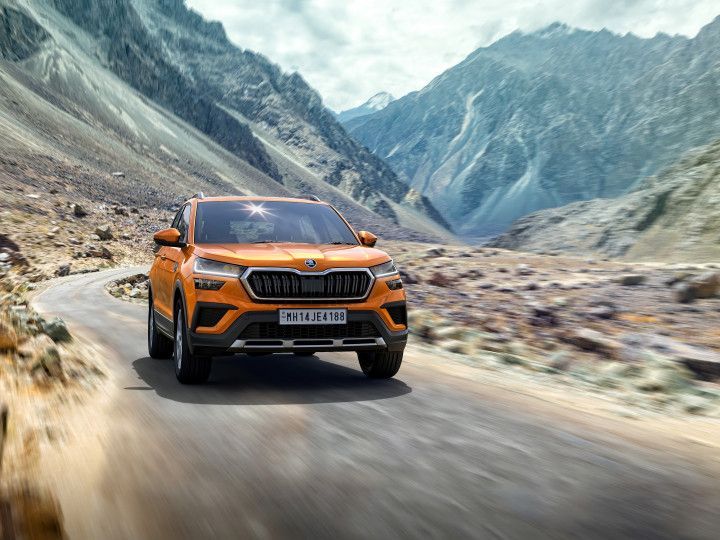 Skoda Auto India has unveiled its first made-in-India SUV, the Kushaq. It also happens to be the first offering under the carmaker’s India 2.0 strategy and boasts up to 95 percent localisation. While the covers are finally off the SUV, based on the MQB-A0-IN platform, bookings will begin in June and deliveries the month after.

The Kushaq will sit in a hotly contested compact segment SUV when it arrives. Almost as tall, wide, and long as the heavyweights Kia Seltos and Hyundai Creta, the Kushaq boasts a bigger wheelbase. If dimensions aren’t your thing, you’d probably consider the Kushaq over its competitors because of its ‘please-all’ appearance.

If you’re still not convinced, the cabin should help. The Kushaq gets a subtle interior layout finished in grey and white with glossy black highlights. It gets a blend of a 10-inch touchscreen and analogue dials. It also comes with a nice two-spoke steering wheel and touch-based climate controls. Features on board include connected car tech, ventilated front seats, single-pane sunroof, and a six-speaker sound system with a subwoofer.

No diesel for you if you opt for the Kushaq. It will only be offered with two turbo-petrol engines: 1.0-litre and 1.5-litre. Transmission options include a 6-speed manual gearbox as standard, a 6-speed torque converter option for the 1.0-litre motor, and a 7-speed DSG automatic transmission for the 1.5-litre engine.

Of course, none of this matters without the price of the SUV, which Skoda is yet to announce. However, we expect it to be priced from Rs 9 lakh to Rs 17 lakh (ex-showroom). Aside from the segment-topping Seltos and Creta, the Kushaq will also compete with the Nissan Kicks, Renault Duster, and Maruti Suzuki S-Cross. Excited? You’re not alone.