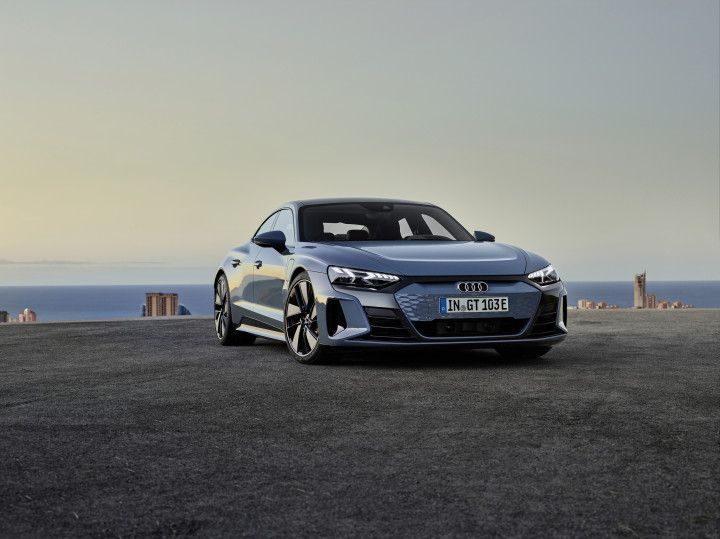 Audi has revealed its first all-electric Gran Turismo, the e-tron GT, that will go up against the Tesla Model S and the Porsche Taycan. Along with the standard model, the Ingolstadt carmaker also took the wraps off the RS e-tron GT, its first-ever all-electric RS car. Both models have the typical Audi flair, but underneath the skin, it’s nothing but a Porsche Taycan.

But does the e-tron GT have the flair of the Porsche? At first glance, yes. The production-spec model retains almost 100 percent of the concept’s design. The large inverted Audi grille, which is finished in body colour (or black in RS models), has been closed for better aerodynamic efficiency. In fact, Audi says this is one of the most aerodynamic cars at 0.24cD. Then there are the headlamps, which can be opted with Matrix Laser LED, featuring their own unique X-shaped DRLs.

The sloping roofline that flows cleanly to the boot might remind you of the Taycan. But Audi’s trademark haunch above the rear wheels, which incidentally is the widest in the e-tron, gives it muscle and distinction. When viewed head-on at the rear, the e-tron looks aggressive and that’s no bad thing. We love those rear LED tail lamps, which do that super cool dance while locking and unlocking.

Speaking of wheel options, Audi will offer the e-tron with various designs ranging from 19- to 21-inches with an aerodynamic design. The 20- and 21-inchers will also come with aerodynamic blades to make it more smooth flowing.

The interior, in contrast, feels a bit drab when compared to the exterior. Mind you, it’s luxurious and you get the sense of Vorsprung Durch Technik (lead by technology) once you’re inside. But it doesn’t have the sense of occasion like the Taycan’s cabin with multiple screens or the new Model S’ minimalist interior. Audi has also decided to offer physical controls for the climate control, instead of the dual touchscreen setup. A good move as you don’t need to take your eyes off the road to operate it.

It also sees generous parts sharing. For instance, the steering wheel is lifted from the RS7 Sportback while the infotainment system is from the A6. The digital dials, on the other hand, are similar to the e-tron SUV. The RS models feature sports seats, RS-specific instrumentation, and some red stitching to denote its sportier intentions.

Let’s talk about the e-tron’s powertrain. Both the standard and RS model come with dual motors, drive all four wheels, and draw power from a 95kWh battery pack. Here’s a detailed table with the details of both:

The e-tron GT supports fast charging. Its battery pack has a voltage level of 800 volts and that allows for some crazy charging speeds. It can be fast charged up to 270kW and 0-80 percent takes just 23 minutes! The presence of a thermal management system and heat pump ensure the battery doesn’t deplete in cold weather.

The e-tron GT is also Audi’s first low-slung electric model. It has a flat floor, resulting in a low centre of gravity, in fact, Audi claims it’s much lower than the R8 supercar. Four-wheel steering makes the e-tron GT more nimble to drive than its 4.99-metre length suggests.

The new Audi e-tron GT in India is unlikely to be launched here in the near future. But considering the carmaker is revamping its portfolio and launching the e-tron SUV later this year, we expect the GT to come sometime in 2022.