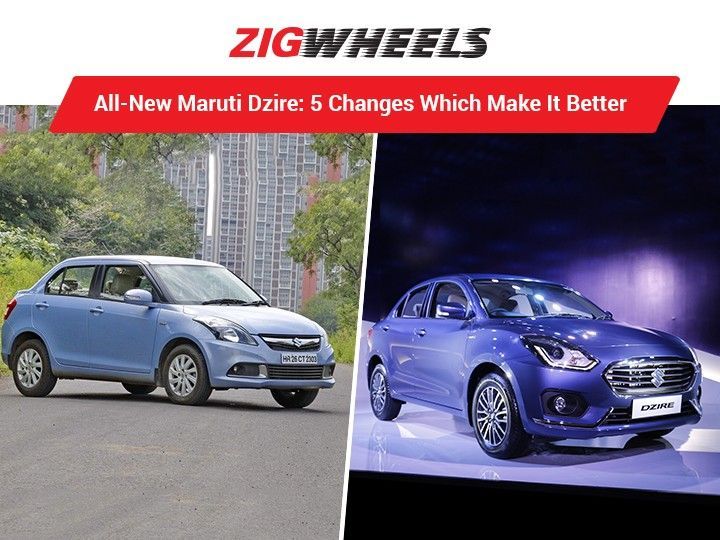 Maruti has revealed the all-new Dzire and it's looking bigger and better. Though the Dzire is the highest selling sedan and the second bestselling car of the country, it was never seen as a premium car. Now, Maruti has made sure that the (at least the top-end) sedan also appeals to the buyers looking for a little more finesse, and not just reliability. Here is a list of five new introductions/changes in the new Dzire which make it a better package.

When Maruti had to chop the first generation Swift Dzire to fit under the 4-metre mark, the sedan ended up looking boxy and losing its charm. But now, the flowing lines are back and Maruti has given the Dzire a big front grille with loads of chrome, making it look premium. From the side, the 40mm drop in height becomes apparent as the car now looks well-proportioned and the curvy shape of the roof and the smooth flowing shoulder line makes it look a lot better than before, and even better than some of its rivals in the segment.

Maruti has realised, and, rather seriously, decided that the way forward involves ditching the age-old halogen bulbs and adopting LEDs. Hence, the Dzire now gets the most modern automatic headlamps in the segment with LED projector units and LED DRLs.

This treatment continues at the rear as well with LED tail lamps and guide lights. The only car to feature LED headlamps (below the Rs 10 lakh mark) before the Dzire was the Ignis. The new units not only make the Dzire look good but are also expected to light up the road better.

The Dzire never had a shabby cabin but calling it well-built and premium would have been a stretch. But now, the Dzire gets a stylish cabin with a dual-personality steering wheel which is trying to be sporty and premium. It has a sporty three-spoke flat-bottom design with wooden accents. Also, the 7-inch touchscreen infotainment system and the automatic AC controls are tilted towards the driver for better ergonomics. The addition of smartphone integration systems like Android Auto, Apple CarPlay and MirrorLink add to the ease of the driver. This will largely work in the favour of the sedan as most of the people buying it will be driving it and not sitting at the back.

The current generation Dzire was not nice to the rear passengers. It neither had adequate leg room not did it feature AC vents. But now, both of these issues have been addressed as the new Dzire gets a longer wheelbase -- hence more leg space -- and also gets rear AC vents which make life at the rear seats very comfortable.

The length of the sub-4 metre segment cars needs to remain, well, sub-4 metre. But Maruti, having used a new platform for the Dzire, have extended the wheelbase by 20mm, making the in-cabin space more generous. Also, the new sedan is wider by 40mm than the current one, adding more shoulder room in the cabin. With the wheels being further apart while being within a fixed length, you would feel that the boot might now be smaller. But no, the new Dzire has 60 more litres of volume space on the boot, adding up to a total of 367 litres. While doing all this, the Dzire also manages to shed weight, again courtesy its new platform, by 85kg for the petrol and 105Kg for the diesel.

We believe the above mentioned 5 changes make the Dzire a friendlier car to drive and a better car to own. Already the bestselling sedan of the country by a huge margin, the Dzire gets even better and will surely attract a wider audience now.