It is longer, wider, taller, and cleaner than before! 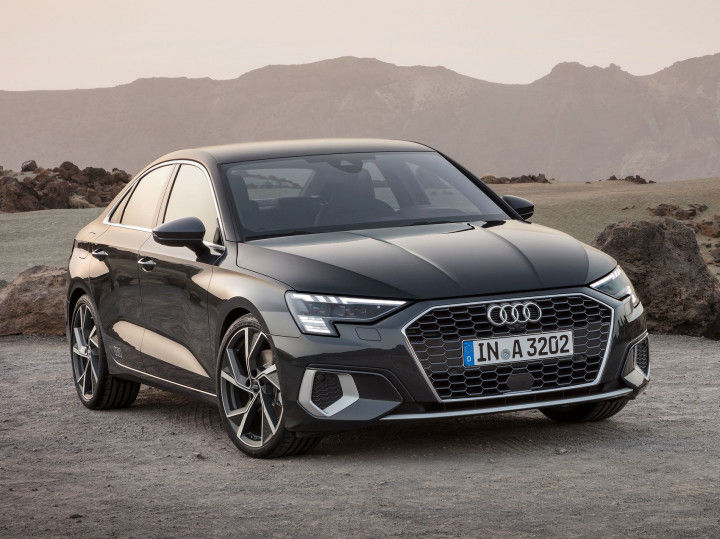 As we had reported a couple of days ago, Audi India has sold out all the BS4 versions of the A3 sedan in India, leaving a void in its lineup. But, to our surprise, within days, Audi has globally revealed the 2021 A3 sedan. The second-generation A3 is a bigger and cleaner sedan with significant changes. Here are all the details:

For starters, the sedan is 40mm longer, 20mm wider, and 10mm taller than before resulting in better headroom and elbowroom in the cabin. That said, the wheelbase (2,637mm) and boot space (425 litres) remain the same. Up front, the biggest change is the singleframe honeycomb grille along with the sharp headlamps featuring Matrix LED technology. The front bumper gets a neat silver finish that contrasts with the overall color scheme.

The silhouette and the window line are similar to the outgoing version but the body now features a mix and match of lines. One striking design feature is in the form of broad fenders, which give the sedan a more mature styling. The tail lamps feature a signature LED treatment like other Audis with a sport bumper design. Overall, the changes give the A3 a more upmarket and premium look than before. Not just that, the new A3 is also more aerodynamic than the outgoing version.

But our favorite change is obviously the cabin with its quirky touches. The first thing that grabs eyeballs are those uber-cool high-mounted air con vents and the silver theme. The whole cabin shouts quality and feels fresh in terms of design. The attention to detail is also impressive. It is loaded with tech like 10.1-inch MMI touch display, 10.25-inch instrument cluster (standard), and heads-up display. Some standout tech on offer are smartphone integration with remote start-stop and other functions, six user support, Amazon Alexa support, WiFi support, and a host of driver assist features.

Powertrain options on offer are a 1.5-litre TFSI with 48V mild-hybrid, standard 1.5-ltre TFSI, and 2.0-litre TDI diesel. The mild-hybrid version comes mated to Audi’s S tronic 7-speed dual-clutch transmission. It can recover energy during deceleration and provide upto 50Nm during acceleration. It also enables the sedan to coast with its engine switched off to improve efficiency. The mild-hybrid and the standard version, mated to the 6-speed manual, develop 150PS of maximum power. The 2.0-litre diesel also puts out 150PS, paired with a 7-speed S tronic. Audi claims the suspension has been tuned to be a touch more sporty and responsive than its predecessor.

The A3’s key rivals are the A-Class sedan and the BMW 2 Series Gran Coupe. We expect to see the new A3 in India by 2021 and in the meantime, we might also get a BS6 version of the outgoing model.