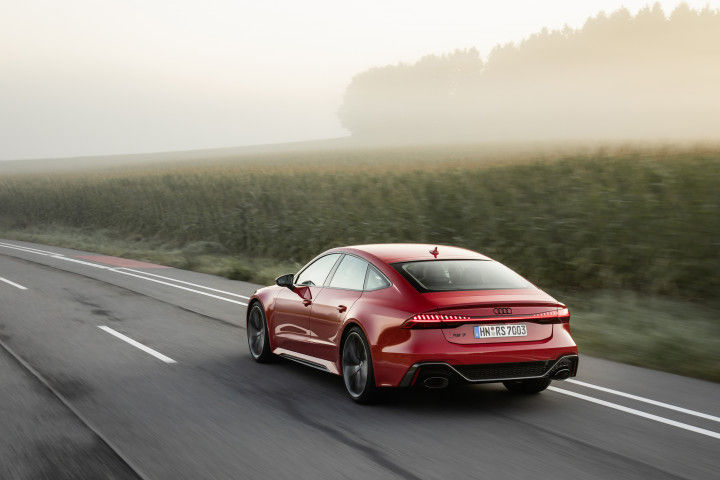 Audi India has officially announced the launch date for the RS7. After numerous teasers and the opening of bookings recently, the Ingolstadt-based carmaker has finally set a July 16 launch date for the blazing four-door coupe. The car is expected to be priced at Rs 1.5 crore.

Based on the A7, the RS7 gets all the aggressive upgrades. The shiny chrome bits are replaced by sportier, blacked-out elements. The front and rear are topped off by massive air intakes and a dual exhaust system respectively. The beast of a car stands on large 21-inch alloys with massive brake calipers which house 10 pistons each! Another eye-catching highlight comes in the form of LED headlights and tail lamps which feature a small sequence while unlocking and locking the RS7. Cool, isn’t it!

At first glance, the interior might look familiar if your eyes go straight to Audi’s twin-screen central console. The RS sports seats are lined with Alcantara upholstery, with big side bolsters. Another upgrade to the tech comes with the replacement of the user interface with an RS-specific one for the twin screens and the virtual cockpit.

The RS7 is powered by a 4.0-litre twin-turbo V8 engine which produces a stomach-churning 600PS and 800Nm, paired with a 48V mild-hybrid system for torque boost. For a car that goes 0-100kmph in just 3.6 seconds, it gets an electronically limited top speed of 250kmp. Featuring Audi’s trademark quattro system, power is sent to all four wheels via an 8-speed automatic transmission. This might be a disappointment for those who want to test the track with this one as it can’t be shifted to pure RWD mode a la the Mercedes-AMG GT 63 4 Door

On paper, this hellish coupe is amazingly good for those who are easily impressed, but the driving experience is what will make anybody drool. The RS7 comes with an RS-specific suspension which can soften, stiffen, and raise or lower the car. So you can stiffen up if you’re cutting corners and soften it on city roads.

Audi has made up for all the time lost in getting an RS model to India by going all-out with the RS7. Bookings have already begun for a token amount of Rs 10 lakh and deliveries will begin in August. It will lock horns with the BMW M8 and the Mercedes-AMG GT 63 4 Door.