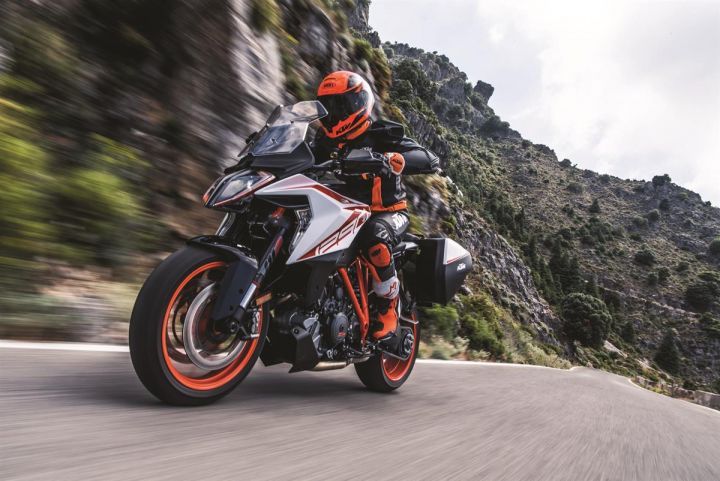 KTM updated the 1290 Super Duke R last year, but its touring cousin, the 1290 Super Duke GT, didn’t get an update alongside it. Although the latter was destined to get some updates sooner or later, the question as to when the new bike would be revealed remained uncertain. In April 2018, spy shots of the almost production-ready bike surfaced on the internet, hinting that the bike would either be unveiled at EICMA or Intermot this year.

And now, the Austrian bike manufacturer has showcased the 2019 1290 Super Duke GT with a host of electronic upgrades and a redesigned front end.

In terms of electronic upgrades, the GT gets a 6.5” TFT instrument console with smartphone connectivity, heated grips, a lean-angle sensor for braking, and traction control. Additionally, the bike gets electronically adjustable WP suspension at the front and back, which can be switched between Comfort, Street, Sport and an optional ‘Track mode’ at the flick of a button.

Other changes include a more powerful headlight with integrated cornering lights in its tank shrouds, a much larger windscreen with one-hand adjustability, small storage compartments in the tank shrouds with a USB port, and last but not the least, a quickshifter. Much like the 2017 range of KTM road bikes, the sports tourer gets illuminated switchgear placed on the left-hand side of the handlebar along with an additional cruise control button.

Notably, the 1290 Super Duke GT misses out on an auto blipper, which comes as an option on the Super Duke R. However, the bikemaker has managed to squeeze out more power from the 1301cc, 75°, V-twin LC8 engine using revised resonator chambers, titanium inlet valves and a new engine map. The motor makes 177.7PS of power and 141 Nm of torque.

The KTM 1290 Super Duke GT will be offered in two colours: white and black. The new TFT screen also adds a bit of functionality like on-screen navigation and audio prompts in 5 languages via a separately available app. The rest of the interface and working of the screen remains the same as the 2018 variant.

The KTM 1290 Super Duke R, on the other hand, receives two new graphics options: black and white. Other than that, it remains unchanged for 2019.