Audi AI:Trail Quattro Gets 4 Drones Instead Of Headlights 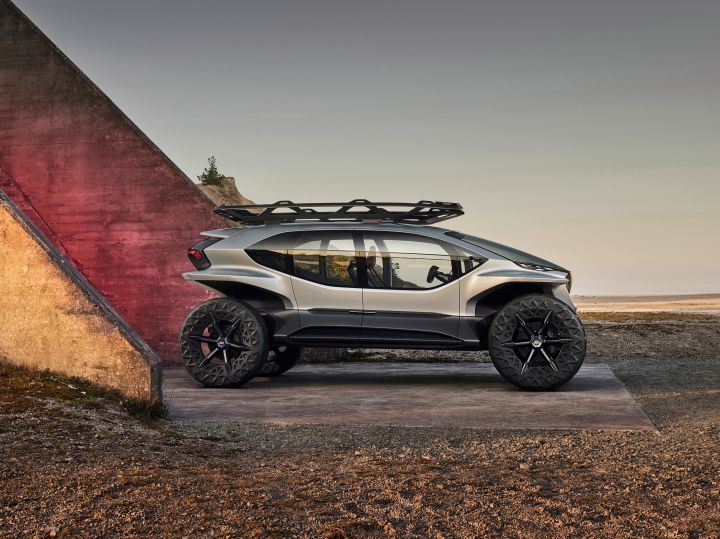 Audi has unveiled yet another car at the 2019 Frankfurt Motor Show. This time around, it's a concept that has time travelled its way from some other galaxy in the distant future. Meet the AI:Trail Quattro concept. Audi says this eccentric looking pod-like vehicle is powered by electricity and can take on some serious terrain. Here’s what this science fest is all about:

From the looks of it, the AI:Trail looks like a modern interpretation of a moon rover. It is unlike anything we’ve seen before to be honest. The AI:Trail join the other three concepts from Audi at Frankfurt: the Aicon sedan, the AI: ME hatchback and the AI:Racer. From the aesthetics, the AI:Trail looks the business and ready to tackle any terrain you throw at it. It’s got a wide wheel track and a design which provides huge ground clearance, breakover angle, approach angle and whichever angle you can come up with.

Powering the AI:Trail Quattro are four electric motors for each wheel through Audi’s famous Quattro system. Maximum output is rated at 435PS and 1000Nm of twist. Top speed stands at 130kmph while the battery is expected to give a normal driving range of around 400 to 500km (WLTP). It also provides a range of 250km when you’re off the beaten path.

Having individual motors on each wheel also has its own perks as it can be used to lock and transmit power independently. The 4-seater vehicle focuses on lightweight construction with maximum body stiffness achieved with the help of  high-tech steel, aluminum and carbon fibre. It weighs in at just 1750kg, including the battery pack, as a result of this. The tyres of the AI:Trail can also regulate the pressure as demanded by terrain changes.

Interiors of the AI:Trail Quattro are unlike anything out there. There are no displays inside the vehicle as Audi wants the driver to focus on the terrain and the nature. It gets a massive windshield that wraps around for wide visibility, along with a transparent glass area for all the doors. The AI:TRAIL also use green materials with the carpet made out of recycled leather that are sustainable.

Now, the coolest bit about this lunar rover-like looking concept are the five rotorless, electrically operated drones with integrated matrix LED lights. They act as the high and low-beam and are capable of landing on the roof and slotting into its charging locations. Dubbed Audi Light Pathfinders, they are lightweight and can fly ahead of the AI:TRAIL and illuminate the path beforehand. Even more cool is that they can also send a live video feed to the driver.

Don't expect the AI:Trail to come in anytime soon as there is no chance of it making into production before at least 2030.

Also Read:
2019 Frankfurt Motor Show: All The Highlights In One Place
Volkswagen Kicks Off Its EV Era With The ID.3 At Frankfurt