New Mahindra flagship SUV to be priced around Rs 30 lakh 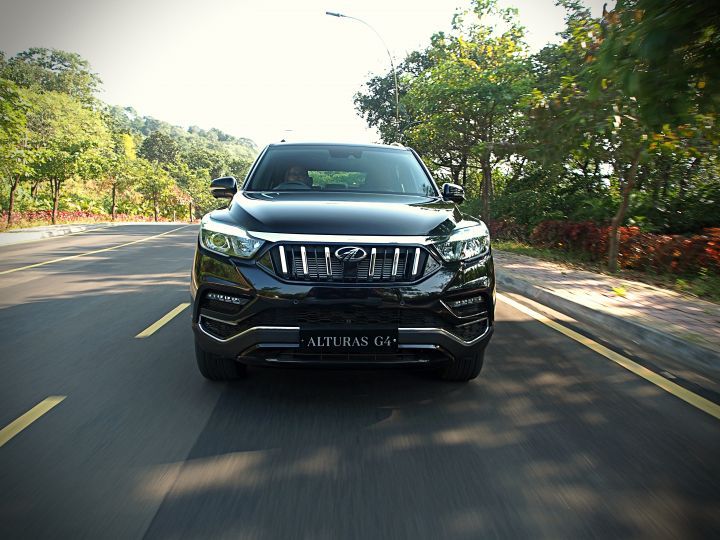 Mahindra’s new flagship SUV, the Alturas G4, is all set for launch tomorrow. Slotted above the popular XUV500, the new SUV from Mahindra’s stables will go up against well established players such as the Ford Endeavour and the Toyota Fortuner. With an expected price tag upwards of Rs 30 lakh on road, the Alturas G4 also has the 2018 Honda CR-V in its sights. Here’s all you need to know about the upcoming Mahindra SUV.

The all-new Alturas G4 just might be the most un-Mahindra, Mahindra ever. Essentially a re-badged Ssangyong Rexton G4 sold globally, the Alturas has been kept virtually unchanged for India. It will be available only in two variants; both of them in automatic guise. While one is offered with a two-wheel drive (2WD) powertrain, the other will feature a four-wheel drive (4WD) configuration.

Powered by the same 2.2-litre motor that powers the Rexton. Mahindra tells us this motor is nowhere related to the mHawk engine found in its other SUVs. Paired with a 7-speed torque converter borrowed from Mercedes-Benz, the new engine makes a hefty 181PS of power along with 420Nm of peak torque.

The Alturas G4 is a big beefy 7-seater SUV and thanks to its sheer size it could easily go toe-to-toe with other behemoths in its segment like the Endeavour and the Fortuner. In terms of dimensions, it is a definite step up from its predecessor, the old Mahindra Rexton, as well. The Alturas G4 is 95mm longer, 60mm wider and has a 30mm longer wheelbase than the old Rexton.

In terms of design, it is neither a plain jane nor does it boast of eccentric cuts and creases. However, it does get a muscular looking stance, albeit a not too aggressive one. With a 244mm unladen ground clearance, it is pretty tall as well. On the inside are the three rows of seating, with the third row only suitable for children. The boot capacity is rated at 234 litres and can be expanded to 641 litres upon folding the last row.

Read all about how the new Alturas G4 handles in our first drive review here.

When it comes to creature comforts, Mahindra has packed the Alturas G4 to the brim. Not only does it get a whole list of usuals, including keyless entry, push-button start, a sunroof, dual-zone climate control, and ambient lighting, it also packs in automatic headlamps, rain-sensing wipers and auto power windows to make your life much easier behind the wheel.
Among the highlights inside are the electrically adjustable seats with memory function, and the first in segment ventilated front seats.

The crisp 7-inch display that’s sandwiched between the two analogue dials in the instrument binnacle adds a unique character to the Alturas G4’s dashboard. And while the 8-inch touchscreen infotainment system with Android Auto and Apple Carplay looks sufficient, we would have loved to see the 9.2-inch system found on the global Rexton G4. In international markets, you get a high-spec 10-speaker audio system developed by Infinity Audio. But for India, there’s only a 6-speaker setup.

The Alturas will be available in five colours -  New Pearl White, Napoli Black, Lakeside Brown, Dsat Silver and Regal Blue. Deliveries will commence on November 26 and pre-bookings are currently open for token amount of Rs 50,000. For more details and pricing of the new Alturas G4, stay tuned to Zigwheels.