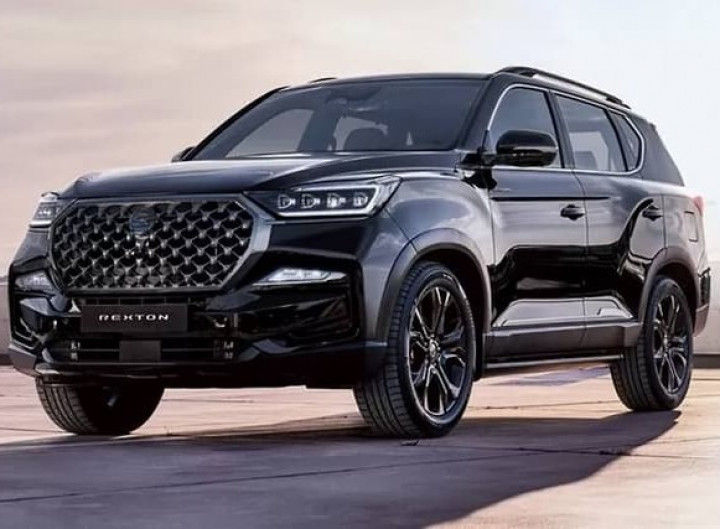 The second-gen SsangYong Rexton is being sold in India as the Mahindra Alturas G4. The donor SUV is set to receive a facelift and its images have been leaked ahead of its official debut in the first week of November. While the older SUV was known to be sombre, the new one stands out with its modern attire.

Most of the design updates have been focussed at the front and rear, with the side profile remaining the same as before, save for the new alloys. It features a larger front grille which gets a dose of chrome, while the new LED headlamps replace the existing version’s HID units. The new bumper looks muscular and complements the overall look of the Rexton. Changes to the rear are less, limited to new LED tail lamps and bumper.

The Rexton’s cabin design is similar to the existing Rexton / Alturas G4, with major updates being the digital driver’s display and a new four-spoke steering wheel. You also get a stubby (read: BMW-esque) gear lever, which replaces the existing model’s gated shifter. Another minor but welcome update is the use of lighter colours in the lower half. The well appointed albeit button-heavy central console has been retained.

The Rexton will also come with the MG-Gloster-like level-1 autonomous driving features such as park assist, lane keeping assist, autonomous braking, and adaptive cruise control. These features could also make their presence felt in the Mahindra Alturas G4 and the 2021 XUV500.

No changes are expected under the Rexton’s engine and it could continue with the current model’s 181PS/420Nm 2.2-litre turbo-diesel four-cylinder and 224PS/350Nm 2.0-litre turbo-petrol engines. The updated Alturas G4 should retain the existing model’s 181PS 2.2-litre diesel engine as it has been recently updated to meet BS6 emission standards. It comes with a 7-speed Mercedes-Benz-sourced automatic gearbox and can be had in either rear-wheel or four-wheel drive configurations.

The facelifted SsangYong Rexton is expected to be revealed in November. We expect these design updates to be passed on to the Alturas sometime in 2021. The updated Alturas will rival the Ford Endeavour, Toyota Fortuner, and the newly launched MG Gloster. Expect it to command a slight premium over the current model, priced from Rs 28.72 lakh to Rs 31.72 lakh (ex-showroom).