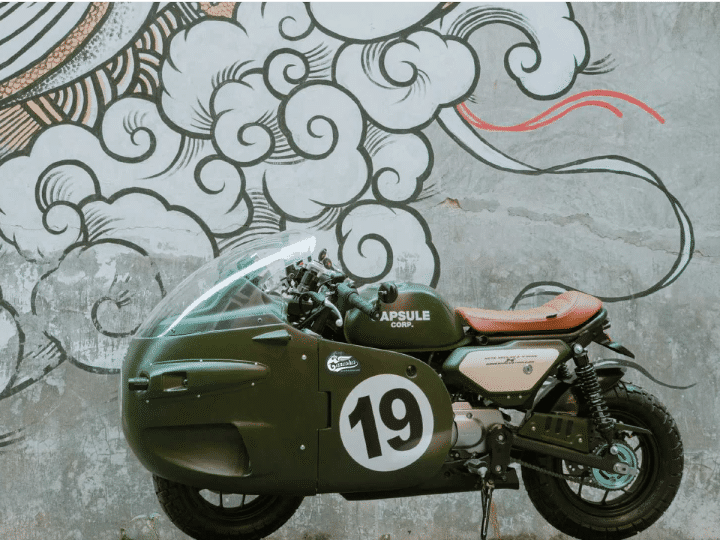 Every two-wheeler enthusiast is familiar with Moto Guzzi. While we now associate Moto Guzzi with vintage and retro motorcycles, they once were at the forefront of two-wheel innovation. They developed the first motorcycle center stand, V8 engine and wind tunnel. One iconic motorcycle that rolled out of their racing department was the 1955 Moto Guzzi V8 500 GP.

This bike was nicknamed the Otto and was powered by an air-cooled, four-stroke, 499cc V8 engine that developed 78 horsepower and reached a top speed of 275 kmph. This engine was mated to a four, five, or six-speed gearbox depending on the race application. While this bike frequently led races and posted fastest lap times, the unreliable and complex engine never allowed the V8 500 GP to finish at the front.

There’s now a custom Honda bike, built by Japanese custom house Ganesha Customs, that is heavily inspired by the design of the Otto. This bike is not as fast as the V8 500 GP internally, it is just a 125cc Honda Monkey mini-bike.

There’s more to this Monkey Racer Replica than just Guzzi history, as this bike comes from the Dragon Ball universe, where it’s actually a Moto Guzzi V8 racer-inspired mech (if the large Capsule Corp and number 19 plate graphics on the bike weren’t obvious giveaways). Bulma, the character who rides Variable No. 19, can make it transform between a bike, a bipedal mech and a trike.

This particular bike is on sale in limited numbers, and it definitely is not meant to be ridden, rather is destined to be a collector’s item. Hence the asking price of this Monkey Racer Replica is JPY 15,95,000, which is equivalent to Rs 9.24 lakh. Not to mention the additional shipping and import costs to get this bike home.

Considering this is just a 125cc bike meant to exist as a flashy decorative item in a motorcycle-anime enthusiasts’ house, the asking price of the Monkey Racer replica is extremely high. It’s unclear how many of these Ganesha Customs plan to make, although it seems likely to be a fairly limited-edition thing.