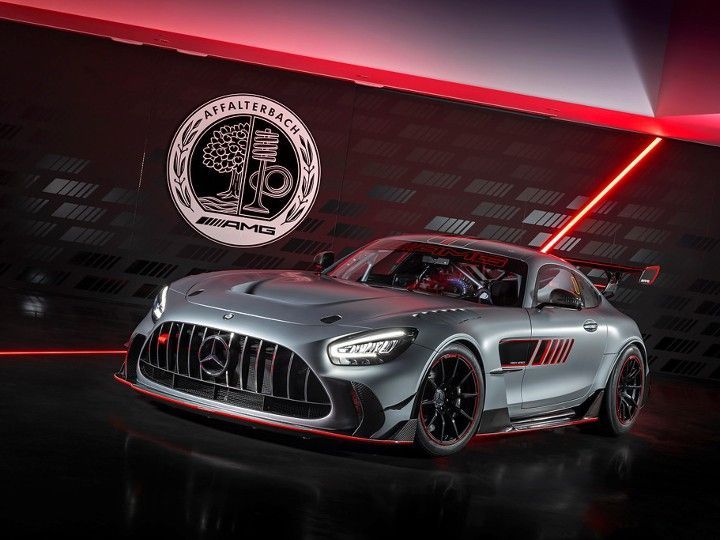 Thought the Mercedes-AMG GT Black Series was hardcore enough? Well not according to the folks at Affalterbach, as they’ve unleashed an even greater speed demon in the form of the AMG GT Track Series. Sure, it's a track-only model, but this special edition of the AMG GT Black Series couldn’t have celebrated 55 years of AMG alongside the AMG G 63 ‘Edition 55’ SUV any better than offering hardcore, unfiltered track thrills.

The AMG GT Track Series gets right down to business under the hood. While it retains the 4-litre biturbo V8 from the standard model, custom fuel injectors, a flat crankshaft as well as specific engine tweaks bumps its capabilities to a meaty 734PS (+4PS) and 850Nm (+ 50Nm) to make it the most powerful AMG track car. Out goes the 7-speed DCT and in comes a 6-speed sequential Hewland HLS racing gearbox with adjustable settings for the rear differential. While Mercedes haven’t revealed performance numbers, it should surely launch off the line and sprint to 100kmph faster than the AMG GT Black Series that does it in 3.2 seconds.

With the performance trickery on offer, you’d think you’re piloting a fighter jet on wheels. By that we mean, four-way adjustable Blistein dampers with settings for high and low speeds. You can even adjust the ride height and anti-roll bar settings for optimal balance on the circuit of your choice. The racing-specific traction control and ABS can be fiddled around with up to a whopping 12 modes.

Cool tech gizmos aside, Mercedes-AMG have also paid attention to the aerodynamics, with  integrated louvres on the carbon fibre lower front splitter to increase front downforce, as well as a large air outlet on the hood that diverts hot air out of the engine bay. Other cool aero bits include side sills shaped to cool the rear brakes, and a dual-element rear wing.

It’s also gone on a diet of sorts, weighing 1,400kg, a whopping 188kg lighter than the AMG GT Black Series. That’s thanks to a carbon fibre hood, fenders, rear bumper, sills, as well as ridding itself of creature comforts in the cabin. Since it's a track-specific car, it meets FIA safety standards with a steel roll cage, a five-point harness for the driver, a fire extinguisher, and an extraction hatch on the roof. All this makes the AMG GT Track Series pretty much the closest thing you could get to a real life racecar.

As for how it looks, it screams ‘race car’ with a semi-gloss silver paint job, with red accents on the front lip spoiler, rear wing, diffuser, and blacked-out wheels nicely blending with the carbon fibre parts. Considering it is a track car, it comes as no surprise that the cabin is stripped of all luxuries. Now, you get proper bucket seats, a race-ready steering wheel, a carbon fibre centre console as well as a fully programmable BOSCH DDU 11 driver’s display unit. It also comes with a data logging system to gain access to motorsport functions such as a lap trigger to keep track of lap times.

A hardcore track demon like the Mercedes-AMG Track Series will be an exclusive offering, with only 55 units being built, each costing 369,000 euros a piece (around Rs 3.09 crore). Sure, this speed demon being limited to circuits and club sport events is a bummer, but honestly, what better place would you get to experience hardcore AMG thrills than on a racetrack?