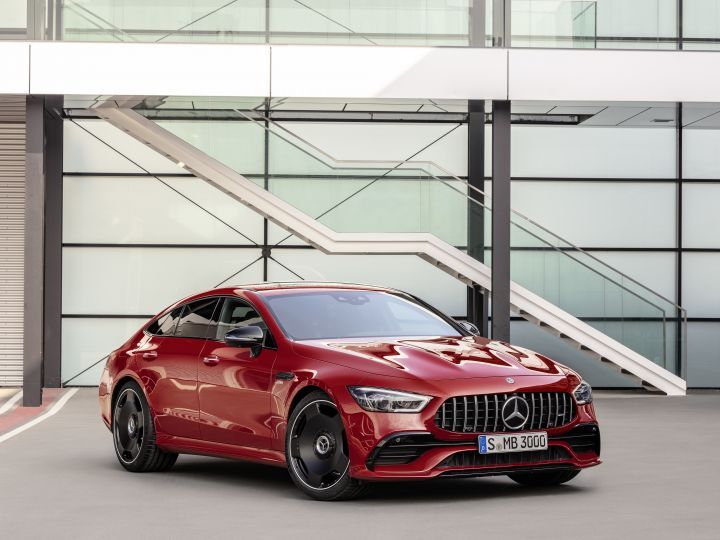 Mercedes's Porsche Panamera rival - the AMG GT 4-door Coupe has been given a new entry-level variant. Powered by a 6-cylinder, 3.0-litre petrol engine which is the same as the earlier unveiled AMG GT 53 4MATIC+, the new AMG GT 43 4MATIC+ gets a lower state of tune. The other variants available in the lineup are the GT 63 and GT 63 S, both of which pack a 4,0-litre V8 biturbo engine.

Diving straight to the heart of the matter, the GT 43 makes 367PS of power which is 68PS less than the GT 53, but still plenty for someone not looking for outright thrill. The max torque of 500Nm has also come down by 20Nm but both the cars use the same AMG SPEEDSHIFT TCT 9G. As a result, the 0-100kmph sprint in the GT 43 takes 4.9seconds, 0.4 seconds off the GT 53’s time. And the top speed too, at 270kmph, is 15kmph less than the GT 53. To put things into perspective, the base Porsche Panamera also packs a 3.0-litre, 6-cylinder mill with an output of 330PS and 450Nm of torque.

Just for comparison, the flagship GT 63 S makes 639PS from its fire-breathing 4.0-litre, V8, twin-turbocharged engine. Courtesy of which, it gets to 100kmph in 3.2seconds and has a top speed of 315kmph. At this point, one would naturally assume that the fuel consumption of GT 43 would be less than the GT 53, but you’d be wrong. Claimed figured for both cars are identical at around 11kmpl.

Moving on to other changes… well, there are none. Both the cars pack the same aggressive exterior looks, active aerodynamics with AIRPANEL air control system in the front apron and rear spoiler, and the same interiors and features as well. Differentiating the two is the boot badge and the retro-styled block alloy wheels on the GT 43, which you could swap for a pair of regular ones if these are too loud for your taste.

So why should you consider the 43 over the 53? Simply put, for the price it is expected to ask. While the GT 43 is yet to make its international debut at the Paris motor show in October, it will naturally be priced below the GT 53.