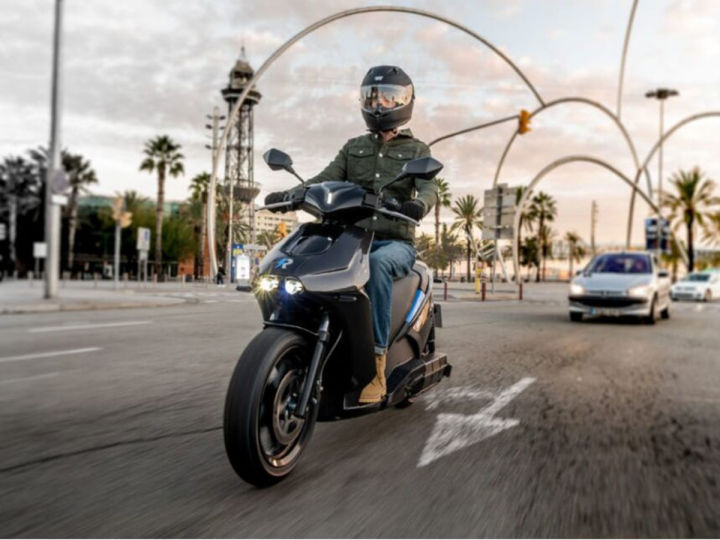 There’s a new swanky electric scooter launched in Europe, called the Ray 7.7. While the design of the scooter might not be up everyone’s alley, courtesy its rather bulbous front, its main talking point is the performance and range that it packs underneath its clothing.

The Ray 7.7 is powered by a 10.7 kW motor coupled to a massive 7.7kWh battery. This translates to a claimed range of 110km when ridden at a constant speed of 100kmph, which is mind boggling. If you want to increase the range, the company claims that you could ride at a constant 80kmph to extract 130km, or further reduce the speed to a constant 50kmph to get 160km. The motor is also torquey, offering up 60Nm, enough to propel it to a top speed of 125kmph.

The Ray 7.7 understandably weighs a lot due to the large battery pack, tipping the scales at 165kg. The chassis consists of a tubular steel frame, with a telescopic fork offering 110mm of travel and dual shock absorbers with 95mm of travel. Braking duties are shared by a 260mm disc at the front and 220mm disc at the rear, featuring a combined braking system (CBS). It gets a 15-inch front wheel and 14-inch rear wheel.

The scooter features a 5-inch TFT display with Bluetooth and navigation. A smartphone can be paired using an application. It also comes equipped with three riding modes - City, Sport and Flow - while also offering park assist. It gets an all-LED lighting and as well as an illuminated underseat storage area, large enough to fit a full-size helmet. Last, but not the least, it comes with an anti-theft alarm that notifies the owner via the smartphone app.

Priced at 9,990 Euros (Rs 8.26 lakh), the Ray 7.7 is at the premium end of the spectrum. The price tag alone makes this scooter unviable for the Indian market. At a fraction of this price tag you can get the TVS iQube, Ather 450X or Ola S1 Pro, which offer good performance and are feature loaded.