Hyundai is the latest car maker to enter the crossover hatchback segment with the i20 Active and it is has a pretty impressive package too. But will it hold its own against the Toyota Etios Cross and the Fiat Avventura? 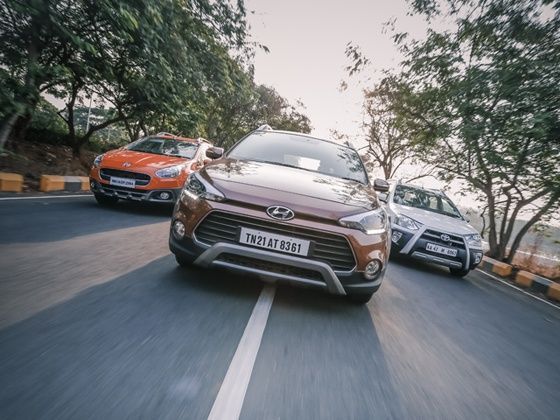 Today, the premium hatchback segment is extremely crowded and cluttered. And considering a large chunk of the overall car sales comes from this segment, there is no elitism left in owning a car from this class. And to bring back that exclusivity, manufacturers have now given birth to a new sub-category. Crossover hatchbacks, a recently spawned sub-segment that has gradually started to tickle the taste buds of buyers in the premium hatchback space. They look a little more butch than your run of the mill hatchbacks but at the same time are equally easy to drive and don’t cost a bomb either.

So far, Toyota has managed to get the plot right with its Etios Cross, Fiat has reworked the Punto and made it look exceptional in the shape of the Avventura. Now, things are getting a little more interesting as Hyundai joins the bandwagon with the new i20 Active.

Visual differentiation is one of the most essential factors that determine the success of a crossover hatchback and in that regard all the three manufacturers have done pretty well.  And although the three are based on their respective hatchbacks, each one looks a lot more purposeful and rugged. Choosing the best looking one among them got even more difficult when we decided to cast a vote. Our man Cyrus Dhabhar swears by Italian design and was awed by the way Fiat has shaped the front-end of the Avventura. For the few hours that the shoot lasted, he was just hung over by the single slat grille, the beefy front bumper and those sweptback headlights.

But while Cyrus was drooling over the Fiat, our photographer Eshan Shetty just couldn’t get the camera to point away from the Hyundai i20 Active. Some details on the car like the projector type headlights with Daytime Running Lights, the funky new fuel filler cap and the new design for the 16-inch wheels look absolutely stunning. And then there is the rear, carried forward from the Elite i20 with a hint of ruggedness.

As for me, although I liked the way the Etios Cross looks a lot more hard-wearing than the rivals in discussion, thanks to that large front bumper with the scuff plates and those massive claddings on the wheel arches and the door. But it would be wrong to say that the Japanese design doesn’t look conservative and simply with that into account, the Hyundai i20 Active and the Fiat Avventura took top honours.

Now, the Elite i20’s interior has been universally loved due to its stylish feel and the amount of comfort and space on offer due to which Hyundai didn’t see the need to fidget with it. So you have the same dashboard, an identical centre console and instrument cluster and the same comfortable seats. To give the i20 Active a unique identity, they have given it colour coordinated interiors – the silver car gets the blue interiors and the brown car gets the black and orange treatment. Space is available in plenty and seating three at the back isn’t a task. The quality of plastics and the comfort all round is good too thanks to which it scores the highest in this battle.

But if you are a six foot something tall behind the wheel, passengers at the back might just have to struggle for knee room, which won’t quite be the case with the Toyota Etios Cross. Space at the back is absolutely phenomenal. Moreover, the windows at the back are larger than the i20 Active which makes the cabin feel a lot more airy. The dashboard and the centre console, although of decent quality look rather dated. However, we really liked the fact that there is no reflection of it on the windshield unlike the i20 Active.

The Avventura’s cabin thanks to the soft touch grey finish in the centre combined with the black plastic looks quite stylish apart from feeling well built. What’s really disappointed is the usage of colours, there are a few too many for our liking. Space at the back isn’t that great either seating three at the back might just be a squeeze.

When it comes to features Hyundai has really set high standards with all of their offerings. Much like the Elite i20, the i20 Active too comes equipped with button start, keyless entry, Bluetooth connectivity and the works. Over and above that, the i20 Active gets cornering headlights and aluminium pedals.

The Toyota Etios Cross as well as the Fiat Avventura get a chunk of these features but the Hyundai holds the bragging rights for the longest list. Both these cars too have Bluetooth Telephony, AUX and a USB port but the Toyota’s Multimedia Infotainment System looks more like an aftermarket one. In terms of safety all the three cars come equipped with ABS.

One really essentially feature that the Etios Cross and the Avventura miss out on is the reverse parking sensors, which is extremely essential in the latter consider the tail-gate mounted wheel. Both these cars don’t come fitted with keyless entry and button start either.

Now to get to the heart of the matter. The Hyundai i20 Active sports the same 1.4-litre diesel unit as in the Elite i20. Which means it continues to make 90PS and 220Nm, and comes mated to a slick six-speed transmission. The engine is silent and feels energetic but once you get past that turbo lag. The gear ratios are a bit tall for our liking too, but it’s only a matter of getting used to. However Hyundai claims that the i20 Active has a shorter final drive to compromise for the added weight.

Under the hood of Avventura is the Fiat designed 1.3-litre Multijet unit that churns 93PS and 197Nm. Like the other two cars, peak power in the Avventura too comes around the 4,000rpm marker, but it feels like an eternity before you can extract it mainly due to the turbo lag. Lower down the revs, you will feel it struggling to pull the 1,255kg kerb weight. Moreover, the notchy 5-speed gearbox doesn’t make things any easier either. But once the engine is in its power band, the Avventura is happy to go.

The Toyota Etios Cross is the least powerful of the lot. The 1.4-litre unit makes just 68PS and 170Nm, which is close to 25 per cent difference in power with the i20 Active, and that is quite a bit. Drive it immediately after either of the two in discussion and you will immediately feel that the Etios Cross is rather lethargic and struggles to gain speed. That said, the fact that it weighs just 1,030kg really helps its cause. Besides, the engine feels smooth and is absolutely silent. The Etios Cross comes mated to a 5-speed manual gearbox which is precise and well suited for varied conditions.

When it comes to ride and ease of driving, the battle gets a little more intense. On the one hand you have the Etios Cross with absolutely sorted gear ratios that don’t really demand too many shifts in the city and on the other end of the spectrum is the i20 Active with its tall gear ratios. And then to matters a little more complicated, the i20 Active’s reversing camera makes it a lot more convenient to park in tight spaces. The Fiat Avventura stands the last among the three. Thanks to its large A-Pillar the visibility isn’t something to flaunt about. And then the fact that engine isn’t really punchy lower down the rev range makes it that much difficult to drive in the city. Moreover, the Etios Cross and the Avventura do not come equipped with parking sensors or reversing camera either.

Push the three cars around a series of bends and the Fiat Avventura feels the most confident. A lot of it can be attributed to the precise steering feel that offers ample of feedback as well as the 16-inch 205 section tyres. Although the Toyota Etios Cross has the smallest tyres of the three, they perform quite well and have ample of grip. The steering although not as precise as the Fiat, does feel pliant. The Hyundai i20 Active stands at the bottom of the list in this category, mainly for artificial steering feel and the body roll.

Braking duties in all the three cars are performed by discs up front and a drum setup at the back. But once again it is the Avventura that outshines the other two. The brakes are sharp and the car doesn’t quite lose its line even under heavy braking. The Etios Cross’ brakes are progressive but effective. Braking has been an issue with the Elite i20 and since the i20 Active runs the same setup this one too continues to feel woody and short on bite.

At Rs 7.72 lakh the Toyota Etios Cross is the cheapest of the cars among the three. What’s more, it is the most fuel efficient too returning an ARAI claimed figure of 23.59kmpl. The i20 Active is priced at Rs 8.89 lakh and at 21.19kmpl its efficiency is marginally better than the Avventura. Moreover it has the longest list of features backing it up too. The Fiat Avventura will drill a hole of Rs 8.49 lakh in your pocket and only returns about 20.5 kilometres to a litre.

Before driving the three cars it was difficult to judge how really closely matched the three are. Each of the cars shone bright in one of the listed criterion. But as an overall product, it is a tie between the Hyundai i20 Active and the Toyota Etios Cross. Yes, the i20 Active has a lot of features on offer and does look more premium on the inside too, but it is difficult to ignore the Rs 1.2 lakh difference in price. And of course there is the efficiency to go with it. As for the Fiat Avventura, it is still best handling car of the three, so if you are looking to go crazy on corners, it isn’t a bad choice to make either.