Skoda Octavia RS245: The King Of All Trades

The RS245 is a one of a kind offering that marries performance, usability and exclusivity into one rather expensive combo. So, is it worth it? 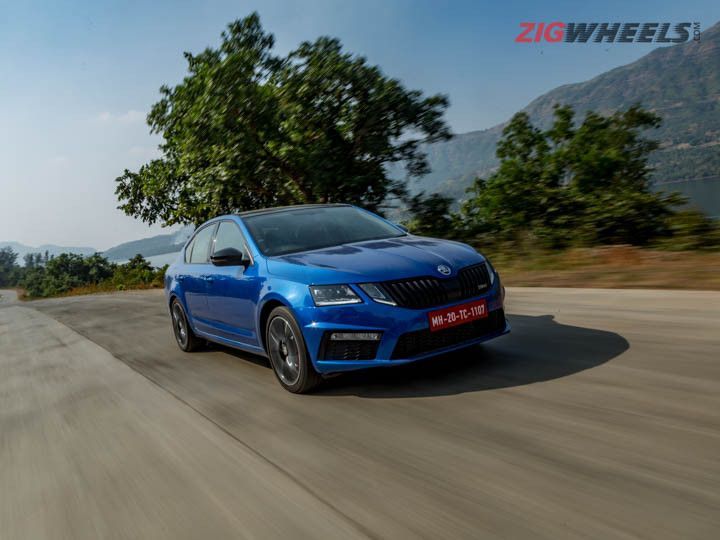 What’s better than getting close to 200kmph on an air strip in the Skoda Octavia RS 245? Simple, spending a week with it in the real world. You see, the Skoda Octavia RS 245 isn’t a particularly important model when it comes to the Indian automotive industry. Only 200 units are being sold in India, and it costs a whopping Rs 36 lakh--and that's before taxes, insurance and the other boring stuff. And it drinks petrol like there is no tomorrow. But given the chance, any driving enthusiast would be willing to spend time in the driver’s seat of the RS245. Here are five reasons why.

Skoda says that the RS245 can do the 0-100kmph run in 6.6 seconds but we say they are lying. The V-Box-recorded time in our test runs indicated 6.2 seconds! In contrast, the RS230’s 0-100kmph claimed time was a somewhat distant 6.8 seconds. Anyway, the source of all that newfound urgency is an updated version of the 2.0-litre, four-cylinder turbo-petrol engine previously seen in the Octavia RS230. Skoda has tweaked the internals of this engine so that the RS245 dishes out 245PS (15 more) and 370Nm (20 more). The DSG has also been upgraded from a 6-speed to a 7-speed, but one of the biggest changes that contribute to the stupidly quick performance of the RS245 is the electronically controlled limited slip differential (LSD).

But more than any of that, you know what makes the RS quick? It’s that V8 rumble that echoes from the speakers as you get going and the pops and bangs that greet your ears with every change in gear. It honestly makes the RS feel quicker in your head even if all of those sounds are being recreated by the speakers inside the cabin. Sorry, the bubble had to burst sometime. At first, even I was bothered by the artificial exhaust note but the more you stop thinking about it and start enjoying it, the more you stop hating it and start loving it. If you can’t bring yourself to do it and the purist inside you wants to hear that turbocharged inline-four petrol engine screaming its guts out, well, you can simply switch off the artificial sounds by using the touchscreen.

It sticks in the corners.

The tyres on our test car might not be particularly new but the fact that it still continued to go around a corner and put all that power down has to be a pat on the back of the Bridgestone Potenza rubber that the RS245 was running. You do hear the tyres squeal if you mash the throttle mid-corner but that’s pretty much it. There is none of that sudden understeer that you’d normally expect from a powerful front-wheel-drive car. That’s because of the aforementioned LSD, which not only puts the power down at the time of hard launches but also distributes it as required in the corners. Couple this with the fact that the Rs 245 runs relatively stiff springs, you get a good amount of mechanical grip that’s especially important in the slower corners. It also makes mincemeat of quick direction changes, with your passengers being the only one looking for something to grip, to hold them in place.

There is no point in being fast if you can’t show it. The RS245 has subtle changes on the outside that point toward the performance hiding underneath the bonnet but to be honest, it is the interior that really tells the story. It’s all black with red contrast stitching and there is Alcantara as far as the eyes can see. The instrument cluster too is all digital, an upgrade over the analogue unit in the RS230, and while it is the same unit we have gotten used to seeing in other Audi cars, it does look quite good in the RS245. The main reason behind that is that the red graphics of the cluster gel quite well with the subtle use of red all around the cabin. The cabin then definitely feels special, and it easily distinguishes itself from most of the cars you will find on Indian roads. So much so that anyone who has no interest in cars and simply considers them a utility to get from point A to point B will also be able to tell the difference when they step into the RS245.

As much as we’d rather hoon around all day, hitting apexes in the ghats of Lavasa or Aamby Valley, fighting to find that one half of second to make us quicker around a corner, real life eventually comes calling. And when it does, it usually means that you are going out to dinner, or getting groceries or simply negotiating the everyday traffic on your way to and from work. The RS245 has all the hallmarks of a quick car. A powerful engine, a stiff suspension and rather racy interiors, but does that mean it’s not cut out for the daily grind?

Wrong! The engine gets drive modes that dull down its response so you aren’t pushed back in your seat everytime you go near the throttle. The suspension, although on the stiffer side, does have a soft side right at the very top of its travel. This means that the small undulations and rounded speed-breakers on the roads are dealt with quite easily. Do remember that once you are past that plush bit of the suspension, it does get hard real quick, and if you don’t slow the RS down enough before arriving at the obstacle, be prepared to hear that loud thud that will make your heart sink and send a nice little jolt through your spine. Apart from that, you get all the creature comforts that you get in any regular car, the backseat space is generous, and the boot is frankly humongous enough to fit in everything you would require on your next big road trip.

It’s a great starting point for a trackday car.

This one’s true only if you live near a track, love setting lap times and have tens of lakhs in your bank account just waiting to be spent! On a more serious note, creating a track car can get seriously expensive, to the point where the Rs 36 lakh price tag of the RS245 might start looking cheap. You can have less expensive builds also but what makes the RS245 so special is its plug and play nature. You can simply order parts found in more powerful VW cars, plug them into the RS245 and voila, your engine starts cranking out more power. Aftermarket suspension, engine tunes and wheels and brakes are also readily available Just remember that most of these mods would void your 4 years/1 lakh km warranty.

In most other cars, adaptability continues to be an issue and thus, most track day cars are built from the ground up around a pre-decided setup. With the RS245, that’s not as big an issue. On top of that, the VW modder community is quite strong globally and a quick search on YouTube will reveal that a good number of RS245s from around the world can dish out in excess of 300PS with just bolt-on updates.

I haven’t really said anything negative of the RS245 in this review and that is because anything that is not so good isn’t bad enough that it needs to be mentioned. You can easily adjust to the RS245’s behaviour but what will take some getting used to is the mammoth price tag. With on-road prices going as high as Rs 42 lakh and even Rs 44 lakh in some states, you will truly be asking yourself if the RS245 is worth it? If we had to answer this question, I’d say yes. And that’s because there is nothing in the market that even comes close to offering the kind of performance that the RS245 does at this price.

Your Audis, Mercs and BMWs are all at least Rs 5 lakh away and in terms of driving excitement, it is only the BMW that can truly outdo the RS245 here, at a much higher price. But in stark contrast, the RS245 will hold its price quite well in comparison to the German luxury sedans, as there are only a small number of these to begin with. Then the fact that the RS245 doubles up as an excellent everyday car and the fact that there are only 200 of these in India will definitely make you feel special every time you drive one. The only negative I can think of at this point is the fact that its fuel bill could lead you to file for bankruptcy!