The diesel Ignis promises sensible Maruti values and low running costs with a healthy dose of modern-day appeal and thrills. How well does it balance the two flavours? 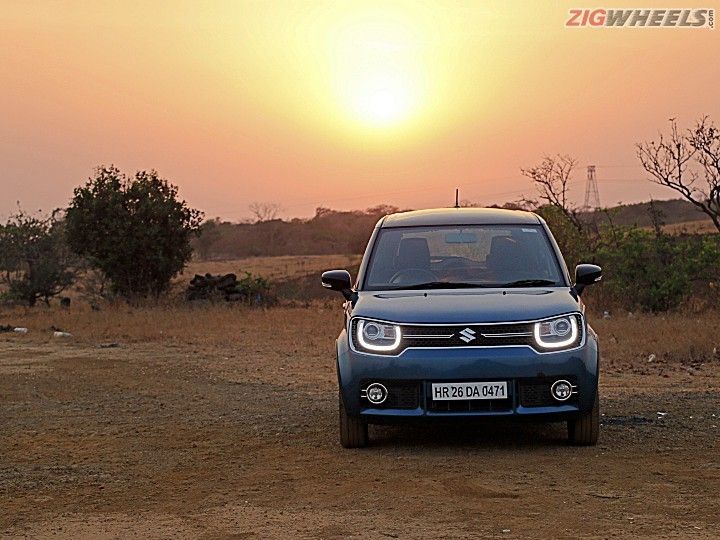 One sultry afternoon in Navi Mumbai, we swapped the Maruti Suzuki Ignis petrol AMT for the top-spec diesel manual. With the cars parked next to each other, I immediately liked two things about my companion for the next week. First up, the colour. The bright aqua blue on the diesel Ignis makes sure people take notice. Second, the all-LED projector headlamps with daytime running lamps. The DRLs shine brightly even under the harsh noon sun. The Ignis, especially in its Alpha trim, is an attention magnet. If making a statement is your jam, you should feel right at home in one.

Also, the headlamps are pretty much the only thing that differentiates the Zeta variant visually from the top-spec Alpha you see in the pictures. Everything else, including the black-finished 15-inch alloy wheels, the quirky tail and the one-piece grille with a chrome lipstick remain as is. The other subtle pointers are puddle lamps (placed under the wing mirrors) and the inclusion of a rear-view camera.

Once inside the Ignis Alpha, you feel at ease almost immediately. The ergonomics are spot on, and it is easy to get used to the placement of switches and knobs. It is extremely driver-friendly too. The steering adjusts for rake, the driver’s seat gets height adjust and the tall driving position means you will be able to spot the Ignis’ nose from the driver’s seat. The seat height adjust has a healthy 30mm range, but it is a real pity that it is available only on the top-end Alpha variant!

The black-white interior looks funky, but a little more quality would’ve gone a long way in cementing the Ignis’ lifestyle vehicle positioning. Our 6000km-driven car already had a few rattles coming from the dash, which got slightly annoying over the Mumbai-Pune highway runs. Also, little additions such as a leather wrap on the steering, an armrest, and fabric inserts on the elbow rest would’ve justified the big Rs 85,000 premium the Alpha variant commands over the Zeta.

The dash looks like it was made with a large central screen in mind. The 7-inch tablet-like screen gets a thick plastic bezel and is divided into four quadrants for the music, calls, navigation and Android Auto/Apple CarPlay. The touchscreen itself is among the best in terms of ease of use and responsiveness; there’s practically no lag in response to touch. We couldn’t test the SD-card-based navigation, but Google Maps worked flawlessly via Android Auto. But, bear in mind, app support is fairly limited. For instance, if you have your music saved on a streaming app (such as Saavn) you wouldn’t be able to access it since Android Auto only supports Google Play Music, Gaana and Spotify at the moment. I couldn’t use the Maps and stream music simultaneously, which practically defeats the purpose of Android Auto.

The automatic climate control interface is possibly the snazziest I’ve seen this side of 40 lakhs! Large rocker switches for the temperature and fan speed, as well as a slick cockpit-inspired array of buttons at the base – the unit does stand out. What I’m not too particularly fond of is the orange backlighting for the display that reads out the current settings. It looks especially out of place at night when you’ve switched the lights on, and the instrument cluster is lit up with a cool white mixed with aqua blue. The Alpha also gets what Maruti likes to call “Accent Meter Lighting”, which is nothing but a strip of blue light above the speedometer.

On a related note, the MID on the Ignis is properly thorough. You get your usual trip and odometers, average efficiency and distance to empty. What I particularly liked is that the MID itself changes colour based on the severity of the error/notification. For instance, the white backlight turns to orange if the car doesn’t detect the key fob or if you’ve left the headlamps on mistakenly. In case you start driving with the boot open, it turns blood red and also flashes a warning continuously. Impressive!

At the heart of the Ignis sits Maruti’s favourite 1.3-litre DDiS engine, in its 75PS/190Nm tune.

The motor lets you lug through the city crawl easily. You can practically start off in second, and upshift to third by 15kmph without causing the engine to choke and protest and vibrations are well controlled. But, push on the accelerator a bit further and you’ll find the Ignis feels a bit annoying as you have to wait till about 2000rpm for the punch from the turbo to kick in in earnest. The remedy is to downshift get the engine spinning and then the Ignis eggs you on to wriggle through the holes in traffic.  The surge of the turbo can get addictive pretty quickly and in its punchy mid-range, there’s enough torque for a clean pull no matter what gear you’re in.

0-100kmph, too, is dealt with in a respectable 12.85 seconds, whereas a third gear pull from 30-80kmph took 8.80 seconds, which is commendable considering it spent nearly a second battling turbo lag in each case. Slam on the brakes and the Ignis sheds speed quickly too, coming to a halt in 3.23 seconds. But, just like the petrol we tested a while back, the diesel Ignis squirms while trying to maintain a straight line under hard braking. Also, we do wish Maruti bumped up the level of insulation in the Ignis’ cabin. The diesel clatter is more audible than we’d have liked, and there’s a lot of road noise that filters in as well.

The diesel Ignis weighs a full 100kg over its petrol counterpart. No surprises then, that it feels a bit more front-heavy, especially around corners. The steering, although not super chatty, is very predictable. Yes, the Ignis has that dead-centre vagueness that’s inherent to most modern Marutis, but it doesn’t feel dead like the old ones. Inside the city, none of that vagueness will bother you. The small size and the light weight is just right to squeeze in and out of gaps and park into spaces that are exactly as wide as the car itself.

The suspension setup although stiffer than the petrol still feels quite adept at dealing with potholes and bumps. The additional weight also gives the Ignis a calm and composed feel at triple digit speeds. In fact, with the torquey diesel engine, you’d have no issues holding on to those speeds all day long. It won’t pinch the wallet while doing it either. On our test run, the Ignis diesel returned a healthy 23.08kmpl on the highway. Inside Mumbai traffic, the figure dropped to 15.87kmpl, which is respectable. On a full tank, it is safe to expect a 450-500km range.

Although its styling suggests a youthful nature, the steering-suspension combo isn’t as much fun as say a Swift. While there’s a bit of body roll what eats into the cornering magic are the tyres. The tyres aren’t well suited for attacking corners as the front breaks into a predictable slide fairly quickly.

Jack Of All Trades

First, is there a fly in the ointment? Yes, we’re afraid there is one. The sense of the premiumness expected from a funky looking hatchback that costs nearly Rs 9 lakh on-road is a bit lacking. The hard plastics inside the cabin, the less than flattering finish and the engine rumble eat into the experience a bit.  But, if you can look past that, the Ignis makes for a sensible machine.

Now, let’s revisit our first question – does the Ignis retain its trademark Maruti values of space, efficiency and reliability while offering something new? Yes, it is sensible an all-rounder with a dose of panache thanks to its SUV-like styling and some added practicality because of its 180mm of ground clearance. The inclusion of ABS and airbags as standard across the range adds to its appeal further. On the whole, the Ignis is a decision that is, surprisingly, more of a rational rather than an emotional decision. 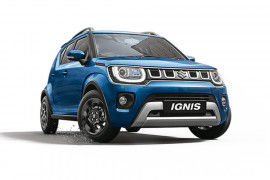 All Comparisons of Ignis