Mahindra is aiming to lure hatchback buyers with its SUV-like KUV 100. A quick drive tells us a lot about the manufacturer’s smallest offering. 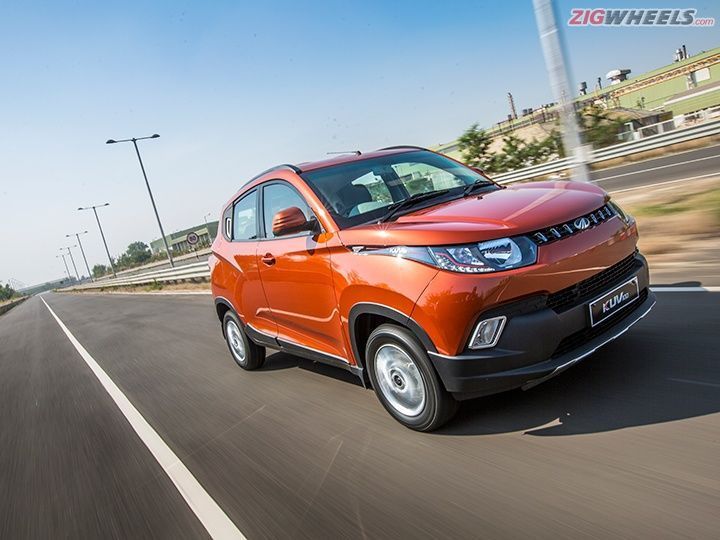 If I were to conduct a survey about the most popular form of the automobile in India, I’m sure SUVs would top the list. Realising the demand for SUVs or SUV-like crossovers manufacturers are quite literally offering them in all shapes and sizes, and at almost every possible price point! Compact SUVs are the latest rage, and most manufacturers today have either launched an offering in the segment or are working on one.

Mahindra needs no introduction as far as SUVs go, and is the latest to join the compact SUV race. It launched the TUV300 last year, a sub 4-metre SUV that looks properly old-school and is doing well thanks to its butch styling. Mahindra’s second compact offering though is the new KUV100 which has been in the spotlight for a while now. We drove it at Mahindra’s test track near Pune, and the KUV100 does look properly interesting.

So what is the KUV100 all about? As the 100 (one double ‘oh’!) denotes, the KUV100 slots in below the TUV300, and is a more compact, subtly styled product with modern design cues. Mahindra is targeting the urban yuppie with it, who wants to stand out in a crowd. These are buyers who want the dynamism of an SUV without having to shell out a fortune. Perhaps also why KUV stands for ‘kool utility vehicle’. Mahindra is taking a leap of faith with this one, though the KUV100 does look promising.

Mahindra has stepped away from its boxy designs and the result is an appealing looking vehicle though the styling is a bit overkill. The KUV100 looks striking but there’s too much detailing and strong character lines at both ends. In fact, at first glance the KUV100 reminded me of the Hollywood movie Honey I shrunk the kids. It feels as if a big, muscular SUV was shrunk in size, and guess that’s the directive designers were given – to design a compact vehicle that has the appeal of a muscular SUV.

Standout design features are the wrap-around headlights that extend across the length of the side fenders, a high-set grille and hood, and faux skid plate. Soft-glow DRLs are a nice touch, giving the KUV100 a stylish feel. The rear looks equally arresting with the distinctive tail lights (they reminded me of the older Audi Q7), though the rear character line is too prominent. The wheel arches with black cladding try to add to the SUV-like feel but tiny 14-inch wheels look disproportionate. The sloping roofline looks nice, and pillar-mounted rear door handles like the Chevrolet Beat look are a nice touch too.

Interiors are spacious thanks to the wheels at either end being stretched away from each other and the KUV100 scores well in terms of space. Another highlight is the seating. Mahindra is offering the option of a bench seat upfront to seat three people. The gear lever and handbrake have thus been moved to the centre console. The handbrake in fact is of the pull type, like the Toyota Qualis and Datsun Go. There’s a lap belt for the middle occupant as well and I tried sitting but realised that the gear lever was hitting my knee. Of course, that’s not a place you’d want anyone sitting without a third airbag. The good thing is Mahindra is offering two front airbags as standard on the top variant and as part of an optional safety pack on lower variants.

Flip the middle seat down and you get a large armrest with cup holders that makes for a relaxed seating position, and the gear lever is within easy reach too. The five-seater version offers more storage space between the seats though. There’s some interesting storage spaces in fact – the front passenger seat bottom has a large removable box with handles to hold a couple of large bottles, apart from a hidden box on the floor behind the front seats which should be good to stow away soiled shoes and the like. The floor is flat sans a transmission tunnel, and makes sitting at the back comfortable, especially with the abundant kneeroom.

Seats are comfortable but could be more supportive. The driving position isn’t too tall but is upright and has an SUV-like feel. The centre console holds a 3.5-inch display for the infotainment system which offers Bluetooth connectivity, USB, AUX and the like. There’s also a specially developed app called Blue Sense that offers live information like tank range, current efficiency and the like apart from letting you control the music. The KUV100 also gets blue mood lighting, puddle lights on all doors, follow-me-home and lead-me lights as well, apart from emergency brake indicators. That’s a lot of convenience features and impressive equipment levels for an entry-level SUV that will compete with the hatchbacks of the world!

The KUV100 is powered by three-cylinder, 1.2-litre petrol and diesel engines that are part of a whole new family of engines developed in-house, called mFalcon. The petrol engine produces 83PS and 115Nm of torque, while the diesel offers 78PS and 190Nm. Both are currently mated to 5-speed manual transmissions and an AMT version will come later. The oil burner offers decent performance and feels smooth but noisy even inside. Performance should be comparable to hatchbacks though only a full road test will help us decide. The petrol feels slightly underpowered but is smooth and slightly quieter. Petrol and diesel both get the same tachometer that redlines at 5000rpm, though the petrol obviously revs higher, accelerating up to 6000rpm.

The diesel also gets a micro-hybrid or start-stop apart from a power/eco mode selector which makes a noticeable difference to performance. Power mode offers good response, but switch to eco and acceleration feels slower instantly, apart from the engine barely crossing 3500rpm. In-gear acceleration is comparable to hatchbacks, and the diesel is what offers a torquey feel typical of SUVs. It is difficult to say whether the petrol will be in demand or the diesel since buyers in this segment are divided, though Mahindra feels the push in the case of the KUV100 will come from the petrol version.

The levelled surface of the test track was barely any gauge for the KUV100’s ride, but expect it to be comfortable given the soft suspension setup. The KUV100 sits on an all-new platform developed from a clean sheet of paper using a monocoque chassis that offers a car like feel, and those used to driving hatchbacks will feel at home. There’s a fair bit of body roll around corners though thanks to the soft suspension and higher centre of gravity, which takes away some confidence when cornering at speeds. The soft suspension also made for some bit of weaving under hard braking but things were pretty much in control at all times, and KUV100 even felt stable being pushed around the banked corners of the track. Brakes have a progressive feel, though some more bite would be welcome.

Mahindra is claiming 25.32kmpl for the diesel version and 18.15kmpl for the petrol. The diesel’s claim in fact is the highest for an SUV, and should generate a fair amount of interest simply with that number. Coming to the all-important question of pricing, Mahindra has priced the KUV100 really well, as prices for the petrol version begin from Rs 4.42 lakh ex-showroom in Pune for the base K2 variant, going up to Rs 5.91 lakh for the fully-loaded K8 variant. Pricing for the diesel KUV100 start from Rs 5.22 lakh for the K2, going up to 6.76 lakh for the K8. The safety packs for the K2, K4 and K6 variants cost an additional Rs 22,000, and those variants are called K2+, K4+ and K6+ respectively.

With this pricing Mahindra is not only undercutting premium hatchbacks like the Maruti Baleno, Honda Jazz and Hyundai Elite i20 but also mid-level hatchbacks like the Maruti Swift and Hyundai Grand i10, which are the cars Mahindra is targeting with the KUV100. It should be interesting to see what strategies hatchback manufacturers resort to, in a bid to counter the lower pricing of the KUV100, which certainly boasts a higher desirability factor with its SUV styling as compared to the hatchbacks.

With the KUV100 Mahindra is eyeing a share of the super-competitive hatchback segment by offering the virtues of an SUV. The KUV100 is expected to face-off against the aforementioned hatchbacks and will aim at eating into their market shares. With its pricing hitting the sweet spot, the KUV100 could just be the perfect entry-point to the manufacturer’s range of SUVs. Mahindra only needs to iron out a few niggles like the engine noise in the diesel and the excessive body roll, apart from which there’s not much to complain about. With its distinctive styling, impressive fuel efficiency claim for the diesel and of course the equipment levels on the higher variants, the KUV100 does offer a lot more to someone in the market for a hatchback. This could be a whole new beginning for the domestic SUV maker.