A Venue with a different badge? A Seltos with a smaller footprint? Or something different altogether? You’ll get the complete picture by the end but here’s a spoiler: set your expectations high 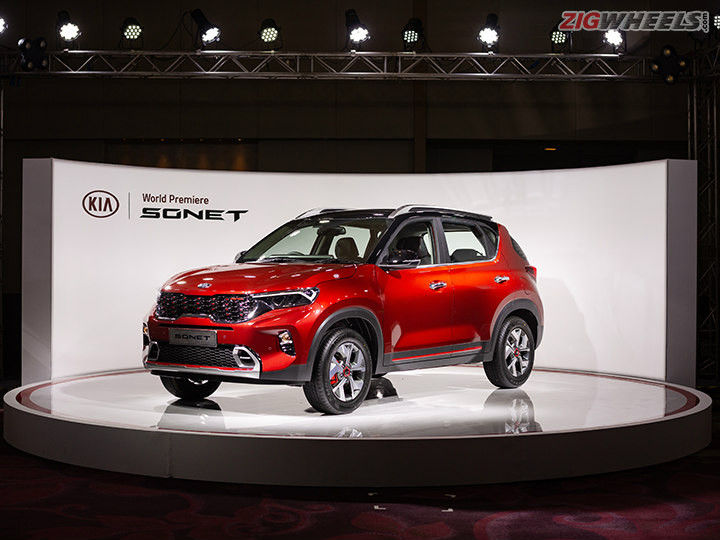 Just take a look at these names: Ford EcoSport, Maruti Vitara Brezza, Tata Nexon, Honda WR-V, Mahindra XUV300 & Hyundai Venue. If you’re a car collector with a taste for machines that characterise middle class mobility, you’d have one sub-4 metre for every day of the week! Well, you will now because just 6 months after debuting the concept at the 2020 Auto Expo, we now have the production spec Kia Sonet.

But in all seriousness, you can’t help but wonder what yet another sub compact SUV is supposed to do that six other cars don’t already. As it turns out, quite a lot!

Much like there is with the Hyundai Creta and Kia Seltos, there is a sibling connection here too. The Sonet shares its underpinnings with the Hyundai Venue but you’d struggle to find the commonality between the two. That’s because the Sonet takes its own design direction which seemingly mimics not the Kia Seltos but the BMW X5!

There’s a good deal of visual mass to the Sonet. While the Venue has crisp lines and a boxy silhouette, the Sonet looks both curvier and more beefed up. This is quite apparent when you look at the wheel arches but especially so when you check out the bonnet. There’s a pronounced power dome with a notable upward swoop to the bonnet that adds a good dose of aggression.

Then we come to the signature Kia grille, the only styling component shared with the Seltos. In this top spec GT line, it’s finished in gloss black, dotted with red highlights (including a red ‘GT Line’ badge) and is cradled with some shiny chrome underneath. Unlike in the Venue, the headlights have a more traditional placement, flanking the grille on either side with integrated DRLs. Not only are these LED headlights, the LED DRLs also double up as the indicators.

The lower half of the front bumper is one bit that seems a touch overdone. It features halogen projector fog lamps with gloss black surrounds and a mesh pattern lower grille underlined by a faux skid plate. An interesting element is the little slit between the two grilles. It’s something we’ve seen in high performance cars like the Lexus LFA and new Audi RS7, but it’s nice to see it here even if it is just for a laugh.

Over to the side and of course, you don’t get the concept's Velar-like pop out door handles and it rides on 215/60 16-inch tyres like the Venue. But we’re glad to see that unique C-pillar design retained. This one element adds a cool retro touch and is something you may remember from the original Mercedes-Benz A Class. And given the GT Line grade, you get red brake calipers, red surrounds for the Kia branded hubs and a red sash on the lower half of the doors.

At the rear, the design inspiration comes not from the Seltos but the Kia Sportage, with some nice detailing to the connected LED tail lamps. The rear bumper is again quite busy on the lower half, with a mix and match of black, gloss black and red, along with chrome to outline the faux exhaust tips.

Credit where credit’s due, the Sonet stays true to the concept and while it’s certainly a very distinctive design, it isn’t controversial. A very rare balance achieved.

It’s the one big difference you feel inside at first. The Sonet doesn’t necessarily sit much higher than the Venue but remember that elevating bonnet line? Well, it helps spice up the SUV-like driving position inside. It’s even met with a Seltos-like infotainment “wall” that eats into your view from the cockpit. This certainly gives the Sonet’s dashboard a character of its own but can be a little daunting for shorter drivers.

It’s very old school in that way. The dashboard itself is tucked in close to the windshield and the fascia is flat-ish. That’s similar to the Venue but it’s where the similarities end. All the AC vents have been stretched vertically and the AC controls are chunky buttons, packed together between the central vents. There’s another set of buttons just underneath the air con switches and these give you an idea of just how the Sonet is doing things differently.

The Sonet is essentially giving you the Seltos experience in a smaller package. Not only is that 10.25-inch infotainment screen the same setup as the Seltos’, even the steering wheel is lifted off big bro. And here’s the kicker: both front seats are ventilated! That’s right, the Sonet features segment first ventilated front seats and derives more features like drive modes (Eco, Normal & Sport) and traction control modes (Snow, Mud & Sand) from the Seltos.

To top things off, the Sonet too gets a BOSE music system (7-speaker), a wireless phone charger, an air purifier (integrated into the front armrest console with a display) and even gimmicks like the LED sound mood lighting. Outside of the side view cameras and heads up display, this gives you almost everything the Seltos does.

That includes the UVO connected car technology, an auto dimming IRVM, a sunroof, a semi-digital instrument cluster, tyre pressure monitor, up to six airbags and, like the XUV300, front parking sensors.

Step into the rear and it’s evident that Kia sees this best used as a 4-seater. The rear row gets two adjustable headrests, an armrest, rear AC vents and a USB charger with a slot to park your phone. While the central portion is flat, the seats have been scooped out on either side for better comfort. Higher variants do get leatherette upholstery too, and the experience inside is certainly upmarket. But much like in the Venue, you’ll find that the cabin could do with a little more width. That said, there’s adequate knee room, foot room and headroom for four six-footers.

Here’s where the Sonet takes choice to a different level. It will share its powertrain options with the Venue. That means a 1.2 litre petrol manual, 1.0 litre turbo petrol offered with a 6-speed manual, 6-speed iMT (clutchless manual) and 7-speed DCT, and a 1.5 litre diesel.

While the iMT was expected to be a segment first with the Sonet, Hyundai beat it to the punch. So Kia’s pulled another trick out its sleeve. The diesel will not only be offered with a 6-speed manual but also a 6-speed automatic. And this isn’t an AMT like we’ve seen in the Nexon, Vitara Brezza or XUV300 but a traditional torque converter.

What’s interesting is that the car you see in these images is the top spec GT Line with a diesel automatic. So it is quite likely that unlike the current Venue, there should be a turbo petrol DCT offered in the fully loaded variant as well.

Kinda bittersweet, isn’t it? The Sonet is geared to spoil you for choice but if you thought the Seltos’ variant line was complicated, this one might just warrant a training course.

Given how the Seltos and Creta go neck and neck when it comes to pricing, we are expecting something similar here too, standard equipment list notwithstanding. However, the Sonet does more than just one up the Venue when it comes to equipment levels, and there’s also the diesel automatic which raises the upper limit of the price. Ex-showroom prices are expected to start just under Rs 7 lakh and go up to around Rs 12.50 lakh.

So the Kia Sonet doesn’t just bring something new to the segment but also raises expectations for what the sub-4 metre SUV space is supposed to deliver.