Can Classic Legends’ Jawa and Forty Two motorcycles dish out a modern experience while drawing on the soul and charm of easier times here in the affordable mid-displacement space?

Huge expectations surround Classic Legends’ Jawa Motorcycles. Why? Combine Jawa’s pedigree, ageless style, modern mechanicals, and sensible pricing and you get a ride that will, and has, riders banging down the showroom doors. But, when you walk through the door and hop onto the saddle, will the Jawa live up to your expectations? 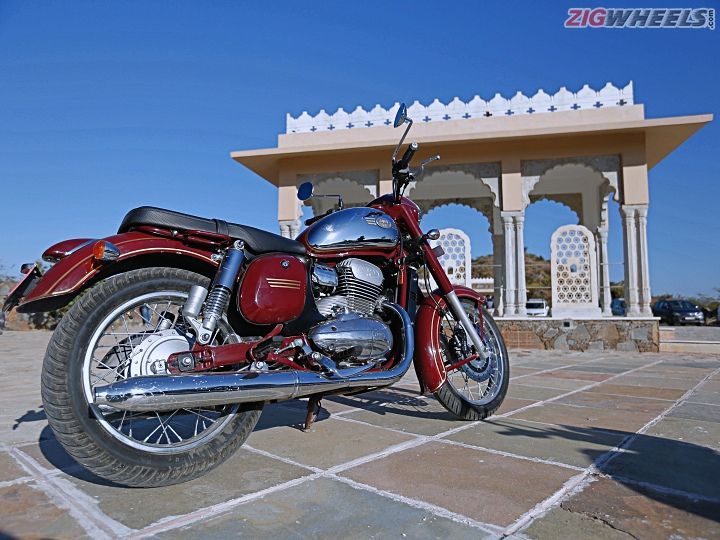 The magic of the Jawa, for me, is in its stance which has been inherited from classic Jawas. Like a sculpture depicting strength and grace, the Jawa’s design flows from a nonchalant face to a purposeful chest, before tapering off into an athletic rear. It also exudes history in the way of logos used on the tank, the side panels, on the horn and the plain lettering on the headlamp glass. The gorgeous engine, the cooling fins (on a liquid cooled engine!) and the crankcase cover make it look properly old-school! To make the modern Jawas as clean and classy as possible, the handlebar lock is tucked away under the triple-clamps and the ignition switch is under the tank. Classic Legends claim that the decision to use a rear drum brake, for now, was also dictated by the same reason.

Undoubtedly, it is the Jawa (Jawa - Jawa, yes) that takes its ancestry very seriously. In the maroon and chrome combination, you would be forgiven for thinking it is the classic! However, a choice of smashing colour options gives this purist lots of spunk. The younger and bolder looking Forty Two swaps the Jawa’s large valanced mudguard for a tighter design. It heightens the aggression by cloaking the chassis, fork covers and headlamp brackets in black. The smaller headlamp, as the speedo pod isn’t integrated into it, makes the face less bulky too. The speedo pod sits offset to the right, but shares the layout with the Jawa. This includes a digital readout for the odometer and two trip meters, an analogue speedometer and fuel gauge. Interestingly, the speedo needle sweeps downwards from the 3 ’o'clock position! The biggest change on the Forty Two is the flat and wide handlebar that is also finished in matte black.

If you are looking to size up the Jawas versus the Royal Enfield, the Jawas will look lighter and more athletic. This is despite the specs being closely matched. For instance, at 1369mm, the wheelbase is on par with the Classic 350!

Clearly, the Jawas aren’t trying to wow you with brochure-boasts as the feature list on both the motorcycles is fairly basic. The bikes won’t be available with a main stand as standard. There are no LED headlamps, DRLS or turn indicators. The instrument cluster doesn’t have real-time fuel consumption, gear position indicator or a clock. What you get is switchgear that looks and feel much like units we have seen on other quality mass market motorcycles. There are smart spoked wheel and there is a single-channel ABS with the 280mm Bybre disc at the front. That’s it.

In terms of quality, the pre-production prototypes we rode were a massive step up from the bikes shown at the unveiling. However, some ungainly welds, tacky looking needles on the speedo and fuel gauge, less than perfect pinstripes could be seen on these bikes too. But, Classic Legends say that the fit and finish of the production bikes will be significantly better. This is promising because the quality of finish for the paint and chrome bits was impressive on these motorcycles. Most importantly even these pre-production bikes emanated a sense of sturdiness.

Yes, the engine used on the Jawas is derived from the Mahindra Mojo. Hence, the combination of dual-overhead camshafts in a four-valve head, 293cc of displacement and the 27PS of power sound all too familiar. But ride the Jawa and it becomes clear that there's been a transformation in character. From an engine that had to be redlined to get any job done, the Jawa engine has solid low and mid-range torque. By changing the valve lift and valve timing, the engine now breathes very differently. The peak valve lift is reduced but the duration is increased. As a result, the engine makes its 28Nm of peak torque at around 5000rpm and has lots of it on tap under that too. Both the Jawas share the same mechanicals, so if your riding primarily consists of trips to the office or college, either of these will make for able companions.

These rides will be more enjoyable because of the exhaust note. There is rumble from the finely tuned exhaust that will make heads turn as the Jawas pass by. Interestingly, Jawa claims that the flutes in the exhaust are adjustable by five steps, allowing riders to turn up the boisterousness of the exhaust note without having to actually change the exhaust!

Also, the designers have taken pains to get the exhausts to look right. Using dummy shields, they have disguised the two-one-two exhaust layout to make them look like two straight-out pipes. They really do look striking.

The Jawa and Forty Two feel a bit different. The former offers a more relaxed ergonomic setup because of its raised bars while the lower ‘bar of the Forty Two has riders leaning forward ever so slightly. Show these bikes an open road and you realise that the city friendly state of tune has compromised on punchiness. From standstill to 100kmph, the progress is sufficiently quick, and an indicated 120kmph turns up as you hit fifth gear. But revving it hard or shifting up does little to nudge the speedo needle further. For an engine with such weighty specs, more punch was expected.

At high rpms there was some buzz from the bar and seat, but the overall refinement levels were acceptable. Changes to the gear selector drum and shift-forks have made the shifts precise and positive. We wouldn’t complain about working the gearbox on these bikes!

So if you really want to enjoy a weekend stint on the highway, remember to stick between the 90-100kmph zone. At this pace, the Jawas will march on tirelessly. The only hiccup currently is that the fueling is a bit inconsistent, which makes throttle response just a bit lumpy at times. Ridden at a more sensible pace, the 14-litre fuel tank should stretch the stops between fuel-ups significantly. That means as you ride even after the sun has set, like we did, the ride won’t slow down thanks to the strong headlamp.

Be it day or night, a couple of adjustments are required. First, six-footers will find the Jawas seat them in a fairly knees-up position. Then there is the seat. It might seem a bit counterintuitive, but this plank-of-wood-excuse-for-a-seat will prove to be less bothersome than softer seats on longer journeys. On our ride, the aches didn’t increase even after hours in the saddle. However, the brand new dual-cradle frame, which is ably supported by the well-tuned telescopic forks, can take some credit for this too.

A sense of agility and involvement dawns on you when you steer the Jawa Jawa into a corner. Handling superiority isn’t the most sought-after aspect on laidback retros, but it is a welcome bonus. So fluid and confident were the Jawa’s manners that I started dragging the pegs through corners by accident. Steering the Forty Two requires some learning and adjustment as the wider handlebar makes it feel a bit too responsiveness when being steered into a corner, and mid-corner adjustments end up feeling clumsier still.

Confidence from the MRF rubber and ABS enabled 280mm Bybre disc at the front allowed me to ride harder still. However, the lack of ABS on the rear wheel requires you to keep a check on impulses when making emergency stops. Carve up a corner or raise rubble on an unpaved road, the Jawas are unfazed by either. A 165mm of ground clearance only strengthens their ability to tame bumps and shocks on dusty trails without breaking a sweat.

While the Jawas we tested weren’t perfect, they have impressed. More performance would have widened the Jawas’ appeal significantly, but they have enough on offer to satisfy the bulk of buyers looking to commute in the city on weekdays and holiday on the weekends. The quality and fueling aspects heighten our desire to see and experience the final production specification motorcycles to give you a definitive verdict. But even in this guise, the Jawa leaves you impressed as much by its mechanicals as its appeal. So, if that sounds promising enough to you, you had better get ready to wait a bit longer as Jawa deliveries are slated to begin in March 2019. It seems, a credible alternative for riders is finally here.