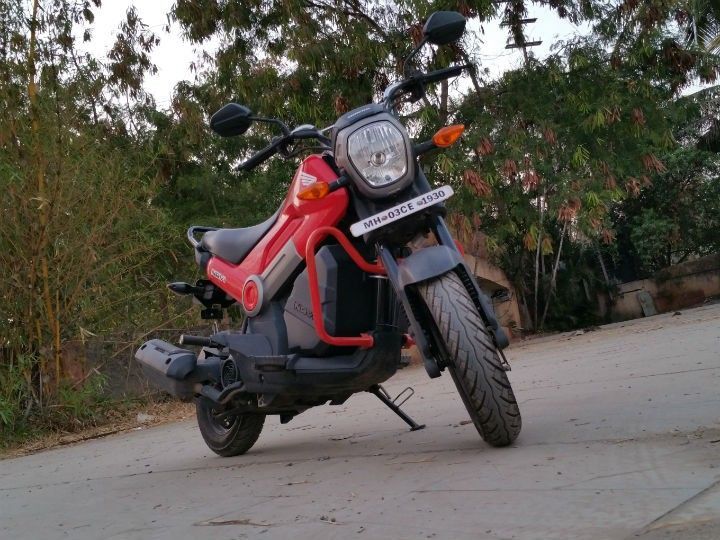 I had been a pillion on the Honda Navi for over two months and was in awe of the utilitarian yet funky looking offering from Honda. The way it breezed past the city traffic, even with two people, on the other side of 100 kg (not me), on board was unbelievable. Yet, when the day to ride it from Mumbai to Pune came, I, frankly, got cold feet and kept postponing the ‘expedition’. With the tricky ghats and the heavy wind blasts awaiting, I finally did set out on the journey with two backpacks on my city companion, the Honda Navi.

While riding this spunky little moto-scoot, if I may call it that, in Mumbai, I have never had but two complaints- the lack of storage space and a bit of shortage of real estate for the pillion. However, there was some respite with the addition of a storage compartment in place of the unpleasant looking cavity under the fuel tank. Unfortunately though, the storage bin wasn’t enough to hold any of my bags and my shoulders had to bear the weight along the 150 odd km stretch.

I got the 3.8-litre fuel tank filled before entering the highway. The ride till the highway, through the Navi’s territory, was a breeze as expected. On the empty stretches of the highway, the nimble handling of the bike wasn’t called for anymore and I looked to cruise north of 70kmph. However, the 110cc single-cylinder, air-cooled petrol engine which ran without any hiccups till 50-60kmph, started to struggle a bit after surpassing the halfway mark of 70kmph on the speedo. At higher speeds, the motor sounded strained and the accompanying buzz meant you are better off cruising around 65kmph. The speeding passersby didn’t make for a pleasant sight either, but they did turn their heads around to check this quirky little two wheeler out; if that’s any consolation.

Halfway into the journey, the two awkwardly placed backpacks caused a bit of discomfort on the otherwise comfortable Navi. The stiff front forks and the single rear suspension didn’t offer much respite at higher speeds, but it took all of the corners in its stride. Thanks to the bike-like riding posture and the 12-inch front wheels, the Honda Navi is endowed with good cornering capability and excels where other scooters fall short. Overall, the Navi is pretty responsive. The drum brakes came in handy during unexpected cattle sightings on empty stretches and the throttle responded sufficiently enough even on steep climbs.

Every truck passing me by made the front sway a bit, which was expected but manageable nonetheless. The tiny mirrors weren’t very helpful and needed me to adjust my line of sight for a clear view of the rear. The Navi’s light weight wasn’t as much an advantage on the open stretch of roads with valleys on either side. However, it didn’t feel much different from an average commuter or any other scooter would have. Even though this wasn’t the best part of the ride, you have to give it to the Navi which does fairly well for its weight.

Nearing Pune, I felt the engine turn off and knew the reserve knob had to be turned up. At about 30 km from Pune, the 3.8-litre tank went on reserve. The Honda Navi returned close to 49.6kmpl on the litre. And after a 120km ride, the convenience of not standing up to refuel, thanks to the conventional bike-like placement of the fuel tank, was more than welcome. Once again, the city traffic on the other side of the highway, felt like home to the Navi and it glided past clogged jams with ease.

It might not have been the best idea to ride the Navi from Mumbai to Pune, but it was an adventure of sorts nonetheless. If the number of heads it turns is any consolation, there were plenty. Every time I stopped or was overtaken by a faster machine, people did take a good, long look to check the Honda Navi out. So, if you are a Navi owner and are shifting base, don’t ride the Navi all the way with your backpacks unless you’re a seasoned rider. But, thanks to its light weight, chucking it on the back of your pickup truck is a rather realistic option. Even though we stretched the Navi beyond its capabilities, it fared well. It did reveal a few shortcomings, but is still a better option, than any of the scooters, for those short breakfast rides to the highway.