Honda’s all-new 125cc Grazia is here to offer a lot more flair and poise, showcasing many firsts in the segment. We get astride it to find out if this is the scooter every teenager should look forward to 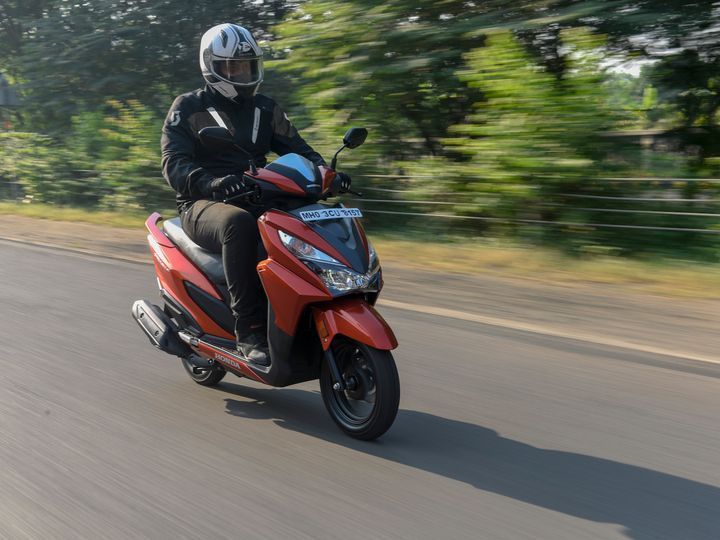 Well, Honda has had the Dio in the market for quite some time now, and over the years this scooter has truly made a name for itself by offering the youth a sense of flamboyance without sacrificing practicality. However, the Dio hasn’t seen much of an update for quite a while now. With the scooter market, especially the 100-110cc space, having picked up to incredible new heights over the past few years, it was only a matter of time before the demand for a new youth scooter would be felt. But rather than just refreshing the Dio, Honda decided it was time to up the ante and offer something even more vibrant. And the end result is the snazzy looking Grazia, which certainly seems to be very promising.

Honda has seriously put in an effort to raise the styling quotient of the Grazia with sharp, angular panels all around. The two-tone stout front apron houses a massive LED headlight unit (a first in the Indian scooter segment), with clear lens indicators integrated on either side of the headlight.

The Grazia also gets an all-digital instrument cluster, with a speedometer and tachometer on top. The second, smaller, red-backlit LCD panel below displays Information like time, fuel gauge, odometer and tripmeter.

Overall, the separate pods give it an uncluttered look and the LCD panels themselves are clearly legible while riding. Switchgear quality and operation of switches is decent, but not exceptional. Also, the rear brake lock clamp does need some effort to lock, but we’re glad Honda hasn’t done away with this handy feature.

This scooter gets a small additional storage compartment behind the front apron, big enough to hold a mobile phone, and includes a charging socket as well. Now that’s what we call convenient! The flat floorboard is wide and has enough room for your feet while accommodating something the size of a laptop bag as well.

Under its wide and long seat, the Grazia offers 18 litres of storage - that’s adequate for a lot of small items, but you can squeeze in a small sized full face helmet at the most… nothing larger!

The sleek side panels continue the chiselled look of the front end onto the rear. The split grab rails complement the angular design at the back and is also comfortable for the pillion to hold on to. The three-piece tail light and indicator cluster is clearly inspired by the one from the Dio and it certainly adds a lot of flair around the back of the bike. But, unlike the headlight, the taillight cluster doesn’t get any LED lighting.

Overall the quality is at par with the quality seen on its younger sibling, the Dio, and in typical Honda fashion, should prove to be reliable in the years to come.

The Grazia is Honda’s second 125cc scooter in India and like all its siblings feels refined. The tried and tested 124.9cc, single-cylinder, air-cooled engine is based on the Activa 125 and produces similar figures as well. Peak power is 8.5PS at 6500rpm while it manages a max torque of 10.54 Nm at 5000rpm.

As expected, the Grazia also feels very familiar in terms of power delivery as it is responsive from low to mid-range, which makes for effortless overtaking in dense traffic conditions. But since it's 1kg lighter than the Activa 125 thanks to the plastic body panels, we’re guessing that it might prove to be marginally quicker to 60kmph. On the highways, it can comfortably cruise along at 70kmph, beyond which the engine feels a bit stressed.

Ergonomics are pretty much scooter-standard, with a comfortable, upright riding position. The seat is well padded and very accommodating. So both rider and pillion should be able to spend a considerable amount of time on it in comfort! The handlebar is positioned close to the rider, which makes it an easy reach. However, taller riders will have the bars hit their knees when taking sharp turns - a problem faced on the Dio as well.

Similar to the Activa 125, the Grazia too gets telescopic front forks and a monoshock at the rear. Ride quality isn’t all that plush as the suspension feels stiff over harsh surfaces and bumps, and with two up it does tend to bob around, taking some time get back to a steady state. We rode the top of the line Grazia, which gets a 190mm front disc brake, and 130mm drum brake at the rear. Even though the brakes did offer confidence under hard braking, you really need to pull the levers quite a bit to bring the scooter to a halt. That aside, the safety net of Honda’s combined braking system (CBS), which is available as standard, should come in handy for both new and seasoned commuters.

The Grazia gets five-spoke alloy wheels finished in black, shod with tubeless tyres from either Ceat or MRF (90/90-12 at the front and 100/90-10 at the rear). Our test bike came equipped with MRF rubber and the grip on offer was enough to tackle some hard braking with ease. The rear wheel, at 10 inches, is standard for Honda’s scooters, while the larger 12-inch front wheel provides stability through quick turns and even over bad sections of tarmac.

We are yet to put the Grazia through our standardised road test, but as per Honda’s claims, the Grazia can manage a fuel efficiency of 50kmpl. With a tank capacity of 5.3 litres, that should equate to a range of over 250km on a full tank.

With great refinement levels and top-notch build quality, the Grazia feels every bit a proper Honda scooter. But, will it be the next hot favourite scooter for youngsters? At a price of Rs 62,269 (ex-showroom Delhi) for the DLX (disc brake-equipped variant) the Grazia demands a fair premium over the Dio and is a little more expensive than the Activa 125 DLX as well. While it does offer great styling and a first-for-a-scooter LED headlight, we think its higher pricing might put it a bit out of reach for college goers. However, with a healthy dose of practicality in addition to its funky aesthetics, this should certainly appeal to those still young at heart.