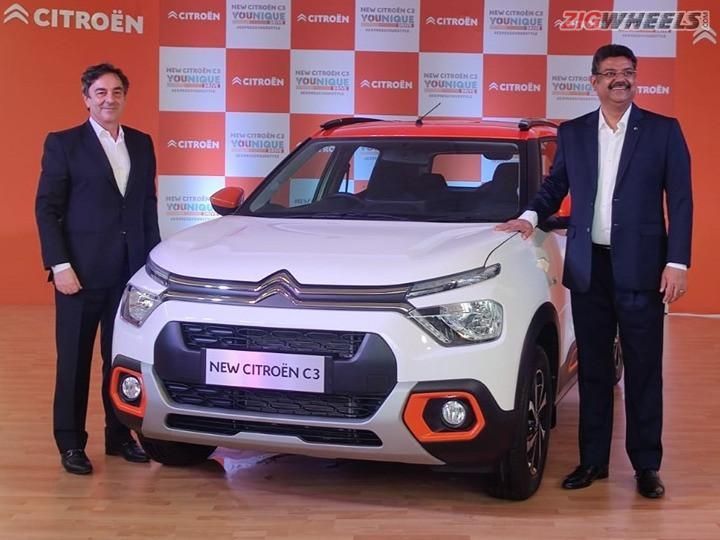 Citroen’s first mass market offering for India, the C3, will be launched on July 20. Prior to its launch, we got to drive the C3 and catch up with Saurabh Vatsa, brand head, Citroen India and Roland Bouchara, MD, Stellantis India to get a better view on their plans and perspectives for the Indian market and customers. Citroen is not afraid of walking down the path less trodden, as can be seen where the C3 has been positioned.

Kartikeya Singhee: What was the thought process behind the C3 and where it sits? Because first and foremost, it's not an SUV, you're calling it a premium hatchback.

Roland Bouchara: The new C3 will be clearly within the hatch segment, but as you noticed, it will have a kind of SUV attitude. The ground clearance is higher,  The back seat is higher than the front seat. The front also looks very SUV. So it's a hatch with an SUV attitude.

KS: Why not just call it an SUV?

RB: Because I believe you cannot call something what it is not. The word SUV is very often used when you shouldn't. This car is a hatch with SUV attitude is what we say.

KS:  What was critical to get it right for the Indian market?

Saurabh Vatsa: First things first, it had to be a sub 4-metre offering, which is almost 74 percent of the Indian market.  We've been at it for a couple of years and we've gone to the consumer multiple times with multiple styling options, and we've taken feedback at every step. Number two, it was very important to retain the Citroen DNA. Therefore, when we talk about comfort, it's very important for us to make sure that we talk about the chassis, suspension dynamics and the fun to drive powertrains.

KS: When we spoke with the C5 Aircross, we spoke about, as you call it, advanced comfort. But with the C3, there's also a fun to drive element?

SV: Citroen Advanced Comfort gets redefined with this new launch. It's important for us to bring you that fun to drive element in the category – there’s the chassis, suspension, dynamics, the sporty steering wheel. Also, a lot of attention has gone into that perfect Citroen DNA combination, which we offer on some of the other vehicles across the world. And the Indian consumer is no less, and they must experience the same regardless of the segment that we play. So C5, of course, is the flagship. It's a very different experience, much bigger SUV. But what we're bringing to this segment is something which is fairly unique and we're pretty confident.

KS: In the Indian market value is very important. The C3 misses out on many features, like a centre armrest which, you know, is common today. Lots of tough calls?

RB: When we launch the Citroen brand we brought the C5 SUV, the Citroen to show what is the Citroen DNA like the advanced comfort and the suspension. We are going to be very focused on the strong USP of Citroen: the comfort, the handling and the roominess, and some of the items we have developed. Now, if we decided to do so, it is because we listen to the Indian Indian customers, what they wanted to get in this car, at the right price positioning.

KS: What about an automatic transmission? That is missing in the current lineup.

SV: We started with 10 dealers with the C5, because the C-SUV segment was a smaller volume segment for us. The idea was to start small, start humble, but that network was catering to almost 80 percent of the C-SUV market. Now we are ready to expand and will have 20 dealers in July, and about 30 dealers by the end of the year. Now, the dealer expansion is not going to stop.

KS: The C3 is going to be offered in only two variants, can you explain the rationale behind that?

SV: We've been going back to the consumer very often. They tell us that having multiple variants is confusing, which is prolonging us from making a decision, or sometimes delaying it. What's also come out to the fore is that personalisation and customisation is extremely important to the consumer, and especially the young and progressive segment where we are going to be positioning the C3. So we will have two variants and two powertrain combinations; then you can customise from 70-plus accessories, which are packaged into easy packs – Vibe, Elegance and Energy – for the consumer.

KS: So as per your expectations how many people will opt for customisation?

RB:  We really believe that, if we develop at this level (the accessories), it will be a high proportion. But I am not going to give you any figures (right now).

Citroen C3 gets steel wheels as standard on all variants

KS: Would it be possible for a consumer to just say, "I want alloy wheels"?

SV: Simplification does not mean taking the choice away. Simplification means how well and how easily a consumer can choose and put it on the car. So the Vibe pack, which is the colour pack, will be factory installed. The other packs will be available at the dealership for the consumer.

KS: So this requires an additional level of training and quality checks.

SV: Absolutely, which is what we've done at the factory and dealership level; both in terms of training and quality of application. So the dealerships have gone through a lot of the training at this point in time.

KS: Talking about the future, you've been very open about the electric plans and that it's coming next.

RB: It will be launched here at the beginning of next year which has also been developed in India by Indians. Stellantis invested EUR 1 billion in India to develop this footprint (in terms of R&D and local sourcing) in India. Our rate of localisation for the C3 is higher than 90 percent, close to 95 percent. To be successful, growth in volume and profitability have to go hand in hand to be able to invest in technologies or bodies.

SV: It is based on the C-Cube platform. At the global reveal of the C-Cube based C3 we said the platform is powertrain agnostic. So it can take in ICE engines and it can take BEV performance on it. The good thing is it's being developed by Indians in India, like the platform.  It is a confident foot forward, especially with PLI incentives and the FAME II incentives that the government is giving. We're quite confident with the development and launch next year.