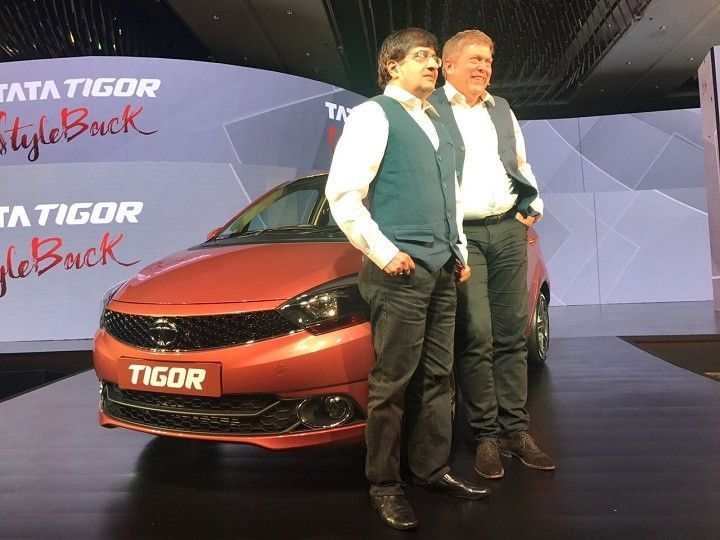 Once all the rage, compact sedans are now slowly ceding share to premium hatchbacks and sub-4-metre SUVs. The solution to break the jinx, in Tata's books, is rather simple - innovate. The Tata Tigor is a sub 4-metre car, yes. But, it's anything but a conventional compact sedan. Before we get on to the specifics, here's a variant wise price list

All about the looks

Tata likes to call the Tigor a 'styleback'. It isn't exactly a conventional sedan, nor is it a notchback since the rear window doesn't open up with the boot lid. What we do agree on, is that the Tigor is quite the looker.

The top-spec XZ (O) variant you see in the pictures gets goodies such as smoked projector headlamps, 15-inch alloy wheels (petrol only; the diesel gets 14-inchers), LED tail lamps and a strip of LEDs that runs across the length of the rear windscreen. But, the Tigor blends form and function in equal measure. Tata has lengthened the wheelbase by a healthy 50mm, which not only liberates more space on the inside but also makes the design look proportional.

Tata has thrown in practically every creature comfort in the book for the top-spec Tigor. The brilliant 8-speaker Harman audio system from the Tiago has been retained, but it now gets a 5-inch touchscreen command centre. The touchscreen has been carried over from the Bolt / Zest and not only lets you control your audio and manage calls but also doubles up as the display for the reverse camera and the automatic climate control. The climate control itself gets a special ‘ECON’ mode that reduces load on the engine by switching off the compressor every now and then.

Check out: Tata Tigor vs Tiago - The 13 BIG Differences!

Other goodies include a chilled glovebox, two 12V charging sockets, height-adjustable driver’s seat, tilt-adjustable steering and power windows with auto down for the driver’s window. The bigger wheelbase results in more legroom compared to the Tiago, and there’s a central arm rest at the rear to help you relax as well. Sadly, rear AC vents have been given a miss.

Bootspace stands at a ginormous 419 litres, which is more than the Zest as well. Traditional gooseneck hinges for the boot have been replaced by hydraulic struts on the outside of the boot opening, which helps liberate that extra volume.

On the safety front, the Tigor gets dual airbags [XZ and XZ (O) only], while anti-lock brakes with EBD are available from the XT variant.

The Tigor can be had with a 1.2-litre petrol or a 1.05-litre diesel. Here’s a quick snapshot of the specs

Notably, the power and torque figures are identical to the Tiago. Of course, the added boot has piled on some kilos as well. The Tigor is heavier by 38kg (petrol) and 50kg (diesel) compared to the hatchback. Also, unlike the Tiago that now gets an AMT-equipped XZA variant, the Tigor does not get the option of an automatic transmission. That said, we expect Tata to introduce a petrol-AMT version in the coming months.

The Tigor sits half a rung lower than the compact sedan brigade which includes the likes of the Maruti Suzuki Swift DZire, Hyundai Xcent, Ford Figo Aspire, Volkswagen Ameo and the Honda Amaze. Tata itself has the Indigo eCS and the Zest jostling for space in the same segment. The upcoming Chevrolet Essentia (the compact sedan based on the Beat) will be a direct rival to the Tigor.