The sub-4 metre sedan is based on the same platform, has the same engines and shares most of its interior with the hatchback. What's different? 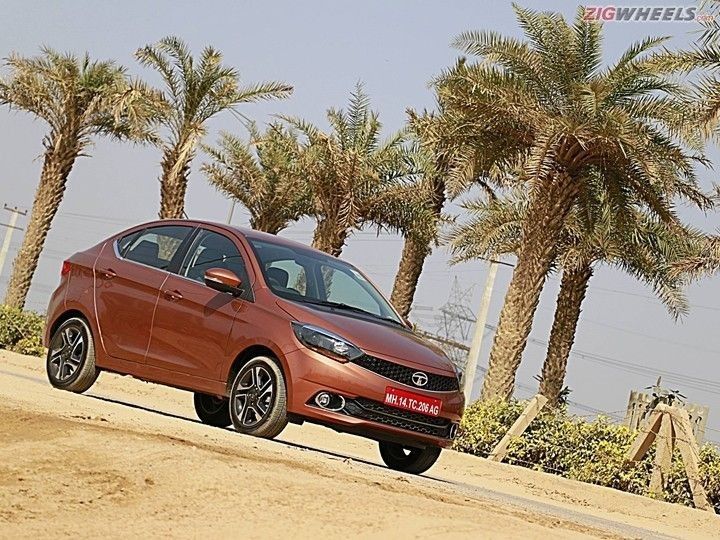 Tata's Tigor is the darling of the Internet at the moment. The sub-4 metre 'Styleback' is based on one of the best-equipped hatchbacks in recent times - the Tiago. That begs the question, what has Tata possibly done to differentiate the Tigor from the hatch? Quite a lot, actually. A few big (and obvious) additions, and a few that are of the blink-and-you-miss-it variety. Take a look :

While the Tiago gets a halogen headlamp, the Tigor gets a set of projectors. Also, note how the indicators on the sedan have been moved towards the base of the headlamps as compared to the edge on the Tiago.

In tune with Tata's "Impact" design philosophy, the Tiago is peppered with a lot of hexagonal detailing. The Tata Tigor is based on the same design language but gets slightly rounded hexagons which look more like the ones on Tata's flagship - the Hexa.

The petrol Tigor gets a set of larger 15-inch alloys wrapped in 175/60 section rubber. The Tiago gets 175/65R14 tyres with 14-inch alloy wheels. We wish Tata would've carried over the same 15-inch wheels onto the diesel variant of the sedan, but that sadly isn't on the cards just as yet.

Unlike most other compact sedans that just get a slap-on boot, the Tigor makes a conscious effort to be bigger than the hatch it is based on. This is most evident when you view it from the side, as the extra 50mm of wheelbase is almost immediately noticeable thanks to the larger rear doors.

This does seem like a no-brainer, but the sheer amount of boot space the Tigor packs deserves a special mention. Compared to the utterly usable 240-litre boot of the Tiago, it gets a much, much larger 419-litre boot. Tata has even ditched the gooseneck boot hinges in favour of pneumatic struts that don't intrude into boot space.

Instead of an LCD screen with a dot matrix display, the Tigor features a user-friendly 5-inch touchscreen display for the music system. The unit is identical to what we've seen in the Bolt and the Zest, and has its own suite of apps as well!

Upping the convenience quotient is automatic air-conditioning. Manual temperature and fan-speed control knobs have been ditched in favour of a climate control interface. The best bit: you can control the air-conditioning through the touchscreen. Pretty cool, eh?

The Not So Obvious

While the Tiago gets a large RC car-like antenna near the front windscreen, the Tigor gets a better-looking stubby one. The antenna is also placed at the rear now. That said, we wish the Tigor got the cool-looking shark-fin antenna from the Geneva Edition.

2. Fabric Inserts On The Door Pads

Here's a great example of attention to detail. The contact points on the door pad, such as the elbow rest and the fore-arm rest, get fabric inserts. This is left uncovered in the Tiago, which means there's plastic instead.

Just like the front grille that differs ever-so-slightly compared to the Tiago, the seat covers feature different detailing as well. As opposed to prominent triangular detailing on the Tiago's seats, the ones on the Tigor feature a slightly sober dotted print.

As trivial as this sounds, the Tigor gets an additional 12V socket for the rear passengers. The socket is placed right next to the handbrake, in front of a deep cubby hole you can use to park your phone in.

The Tigor not only gets larger rear headrests but also features a small neck rest for the middle occupant. The Tiago, in comparison, features smaller cushions, which eventually end up at neck level if you are any taller than 5'6".

To keep the rear occupant a tad more comfortable, the Tigor features a wide central armrest. The cherry on the cake are the integrated cupholders, which take the total utility space count to 24 against the Tiago's 22.

The differences, big and small, help the Tigor carve out its own little niche. Tata will launch the car on March 29, and we expect prices to be in the vicinity of Rs 4.2 lakh - Rs 6.5 lakh.