From the looks of it, the bike is based on the same platform as the RV400 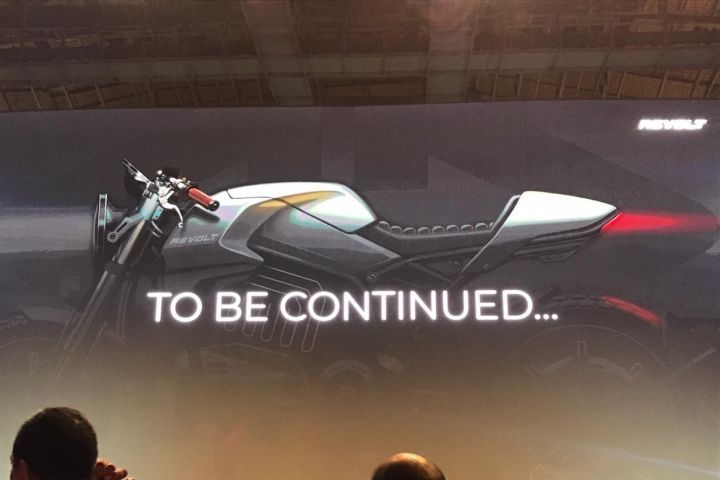 The Revolt RV400, which went on sale today, is quite unique in the sense that it is not only India’s first electric motorcycle, but also sold under a unique plan called the ‘My Revolt Plan’ which aims to revolutionise the way we buy motorcycles. One can get their hands on the base variant of the bike by just shelling out a nominal amount Rs 3,499 per month for a duration of 37 month! It also launched a lower-spec RV 300 under the same scheme for a price of Rs 2,999. But that’s not all. At the end of the launch event, the homegrown electric motorcycle manufacturer also teased its future plans for India by showcasing a rendering of a neat-looking electric Café Racer.

While the overall styling is neo-retro, it doesn't stray away from the Café Racer DNA. The bike looks like it's been designed for speed and handling rather than comfort. By extension, it appears to make do with a single seat and a race cowl at the rear. The slim circular LED headlight looks like it's been inspired by the Husqvarna Vitpilen 701 and goes well with the overall design language. The instrument console, much like the RV 400, could be an all-digital unit.

The tank takes its design cues from the RV 400 but Revolt has dialled up the style quotient with carved out knee recesses, which should allow you to lock your thighs in place while cornering. And thanks to the low slung clip-on handlebars, the riding posture is also likely to be a lot more aggressive compared to its commuter-oriented sibling.

Last but not least, the bike also features a tyre hugger which seems to incorporate the number plate. To keep costs in check, the bike may borrow its frame, suspension setup and brakes from the RV 400. But unlike its siblings, the bike features block pattern tyres. While the brand hasn’t revealed any details about the bike, we could expect the model to cater to enthusiasts rather than the mass market segment. It's expected to be priced around Rs 4,000 to Rs 5,000 per month and carry the same pricing structure as the RV400 and RV300. Revolt Motors could launch the bike by late 2019.