Is This The Bajaj-Triumph Rivalling Royal Enfield Roadster?

The bike comes with a distinct roadster-like design 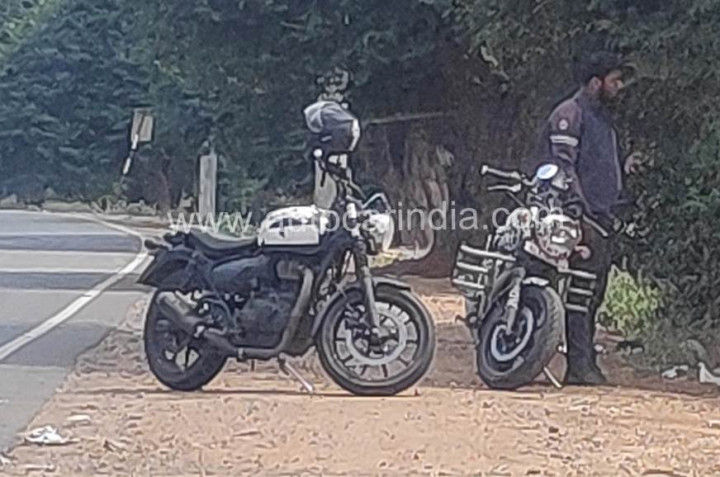 Royal Enfield seems to be firing on all cylinders in preparation for the future. Recently, a new roadster-styled motorcycle was spotted testing. This motorcycle is expected to add to the upcoming new-generation Classic and Thunderbird 350 range. Royal Enfield could unveil this motorcycle along with the other two at this year’s EICMA.

Also Read: Here’s What We Can Expect From Royal Enfield’s Upcoming Roadster

The bike’s roadster stance is complemented by a flatter handlebar and a low, single-piece seat. A single-pod cluster is mounted atop a circular headlamp which looks similar to the one in the next-generation Thunderbird 350X. Even the fuel tank sits flatter. At the rear, the bike gets the same tail lamp and indicators as the current-generation Thunderbird range. The new stubby and upswept exhaust goes quite well with the shortened rear fender and split grab rails.

The test mule gets the same double cradle frame as the next-generation Classic and Thunderbird. Even the powertrain and underpinnings seem to be carried over. For those who haven’t been following the news around the next generation models, the powertrain is all-new and comes under the brand’s J platform. It could have a slightly bigger displacement than the current 350cc platform and the shape of the gearbox casing looks similar to the 650 twins, thus hinting at the possibility of a 6-speed unit. These aspects should make the motorcycle a better highway-worthy bike than the Classic 350.

It is unknown what Royal Enfield might name this bike. While the brand recently trademarked Hunter and Sherpa monikers, both of them sound pretty adventurous, if you ask us. Interestingly, Royal Enfield filed a trademark for the name “Royal Enfield Roadster” this month. Going by the design of the test bikes, this name certainly fits the bill!

In terms of the competition, notable ones include the Jawa Forty Two and the upcoming bike(s) from the Bajaj-Triumph partnership.