New Maruti Suzuki Dzire: How It's Made

Booked a Dzire? We got to see it being assembled at the Maruti Suzuki’s Manesar facility! What’s it like? How do they do it? Let’s find out! 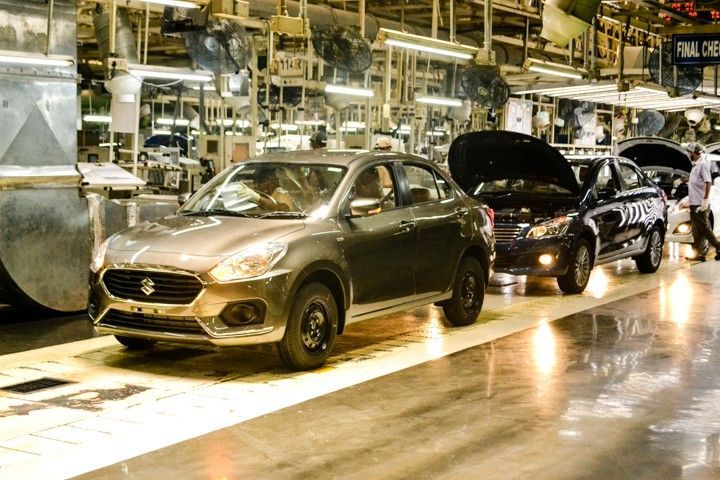 Entering through the gates of the sprawling Maruti Suzuki Gurgaon plant, one could be forgiven for thinking that the factory is a small city in itself. Spread over a total area of 600 acres, the factory is where India’s most loved and revered cars are made. 3,500 trucks enter the premises of this plant on a daily basis and a total of 650 leave, laden with Maruti Suzuki cars en route to their owners. Between the Gurgaon and Manesar facilities, the company produces 5800 cars daily. That’s one car every 10 seconds! This facility is currently the home of the Swift, the Ciaz and now the new Maruti Suzuki Dzire. It will most likely also manufacture the new Swift hatchback as well when it is launched next year.

Laying it all out.
The plant features three different lines namely A, B and C. For our visit, however, we were taken for a tour of line A on which the new Dzire is being currently produced. The assembly line is divided into four key areas; the press shop where body panels are pressed into shape, the weld shop where the high-tensile steel panels are welded together to form the skeleton of the cars, the paint shop which is capable of painting 48 different colours in a single sequence and the final assembly area where the final product is assembled. The final step is the inspection area where the cars are given a final test before they are rolled out for deliveries.

Living in the ginormous sheds are 1,100 state-of-the-art robots. These feed off some of the 18000MW of power that is delivered to the plant every month, of which only 2 per cent is taken from the state’s power grid. The robot's power up juice is freshly brewed at a 1MW solar power plant on the premises.

Get Rolling
The new Dzire begins its life in the press shop as sheets of metal stacked outside the pressing machines. These panels are then pressed into shape and still look like elaborate lego pieces for a giant lego assembly. Once the panels are pressed and inspected, they are sent to the weld shop where the robots start welding the frame piece by piece and the Heartect frame begins to take shape. The robots also perform a 1,000-point inspection for any welding inconsistencies, in the case of which the line is immediately stopped post an alarm.

Like out of some sci-fi film, in a flurry of sparks, the hot-tipped robots weld the body panels into place. After the body panels are fit into place, the amalgamation of high-tensile steel and metal finally begins to look like a Dzire. More checks and then it’s onto the paint shop where pre-fed details dictate what colour each car will adorn. Finally, the body moves to the assembly line.

It’s here that an army of superhumans can be seen picking up heavy parts like batteries without any effort. Zero gravity tongs, yep, sounds cool, make these heavy objects very light! Power-assisted lifters raise or lower the car’s height on the assembly line so that the worker doesn’t have to bend or stretch too much. They also follow a process called the ‘Pika Pika’ where a computer at each station tells the worker which part he is supposed to be using. The worker scans the barcode and the light blinks green to signal that the correct part has been picked from the bin.

The torque limit wrenches ensure no part is too tight nor too loose. In case of any inconsistencies, the light blinks red and the line comes to a halt until the problem is rectified. A zero gravity lifter then lifts the dashboard into place which is followed by the seats and then the engine. The doors are the final parts to be fitted to the car post which it is taken to the final testing area where the REBA or Rapid Entire Body Assessment is conducted to ensure the car is ready for delivery.

Smart, Safe, Green.
Maruti Suzuki prides itself on its safety protocols and places the safety of its workers as its top priority. Each workstation attendant is given a headgear, kevlar gloves and denim arm protectors to ensure their safety. Like the plant it comes from, the new Dzire too is safety conscious, says Maruti. It complies with the crash test norms which are set to be implemented in the country in 2019. According to the manufacturer, the car already complies with frontal, frontal offset and side impact norms. It will also come with dual front airbags as standard along with EBD, ABS and ISOFIX child seat mounts which will also be a part of the standard package.

Also, energy efficiency is a top priority at the plant. Apart from the solar power plant, the water used in the plant is recycled and the power generated by the Dynos is used to power the lights in the inspection area, all of which significantly cuts down the plant’s carbon footprint. These innovations, the company claims, were suggested by the workers in the factory themselves. In fact, most of the equipment used like torque limit wrenches and the synchro trolleys which move along the assembly line to minimise fatigue have all been derived from worker’s suggestions.

Off to the showroom
From sheet metal to finished car, the entire facility works like clockwork and no resource is wasted. This sprawling facility is a testament to optimal use and reuse of resources which led me to think that maybe our cities could take a leaf out of the book of this ‘city’ on how we can operate better in our daily lives. Maruti Suzuki’s made-in-Manesar Dzire has been launched, and you can read more about its variants and pricing here.