MG Hector Unveiled; Will Go Up Against Tata Harrier And Jeep Compass [UPDATE]

The Hector packs MG’s iSmart connected car technology, which is not only a first in the segment but also allows for remote control of various cabin features 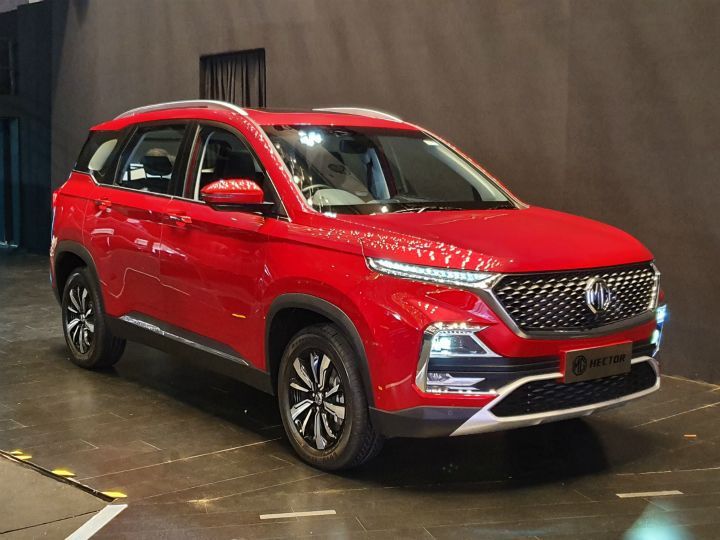 The MG Hector has finally made its global debut in the country today, putting an end to months of rumours and speculations regarding its powertrain options and features. The mid-size SUV, which is expected to launch in June 2019, will kickstart MG Motor’s operations in India. The Hector is expected be offered in a total of four variants and five colour options. And unlike its primary rival, the Tata Harrier, the Hector will be offered with both petrol and diesel engine options. Let’s take a closer look at what the new mid-size SUV has to offer.

The MG Hector is not only the longest SUV in its class, it is also the tallest. It also boasts of a segment-leading wheelbase of 2750mm. This should translate to a class-leading  legroom in the first and second row. Boot space is rated at 587 litres.

With a total of four variants on offer, the Hector will provide buyers with plenty of options based on their budget. According to the leaked info, the four variants include Style, Super, Smart and Sharp. Here’s what each variant has on offer:

Style: The base-spec Hector misses out on a number of features, including the portrait-oriented 10.4-inch touchscreen infotainment system. It also misses out on the 17-inch alloy wheels offered in higher variants. This variant should allow MG Motor to price the Hector pretty competitively, just like what Mahindra did recently with W3 variant of the Mahindra XUV500. You can read all about it here.

Super: This variant gets a large touchscreen infotainment system with Apple CarPlay and Android Auto connectivity options. It also gets cruise control, a reverse camera, LED tail lights and more.

While all variants of the MG Hector get two airbags, ABS with EBD, ESP, traction control, rear parking sensors and disc brakes on all four wheels as standard, the Smart variant gets two additional airbags while the Hector Sharp gets a total of six airbags.

The iSmart connected car technology is accessed via the portrait-oriented 10.4-inch touchscreen on the centre on the dashboard. Always connected to the internet via a 4G SIM embedded into the SUV, iSmart allows users to access features like emergency calls, vehicle status, remote control for the sunroof, tailgate, door lock and a whole lot more. MG says the system is 5G-ready and is capable of receiving over-the-air updates for software and features. The Smart and Sharp variants of the Hector also come with a free premium subscription to music streaming service Gaana and navigation by TomTom IQ maps. You can read more about the connected car technology here.

As speculated, the MG Hector is offered with two engine options: a 2.0-litre diesel and 1.5-litre turbo-petrol. The 2.0-litre FCA-sourced diesel engine produces 170PS of power and 350Nm of torque, which is similar to what the Jeep Compass powered by the same motor puts out. The Tata Harrier too uses the same engine, albeit in a lower state of tune. In the Hector, this engine can only be had with a 6-speed manual.

The 1.5-litre turbo-petrol produces 143PS and 250Nm of peak torque and will be offered with the same 6-speed manual mentioned above as well as a 6-speed dual-clutch automatic (DCT). The petrol engine can also be had with a 48-volt mild-hybrid system that is said to increase fuel efficiency by 12 per cent and also provide an additional torque of up to 20Nm in stop-start traffic conditions. MG Motor claims that the Hector petrol-auto version will return 13.96kmpl while the petrol-manual will have a fuel efficiency figure of 14.16kmpl. Those looking for a more frugal SUV can opt for the diesel variant, which has a claimed mileage of 17.41kmpl.

MG Motor has said that it will start accepting bookings for the Hector from June, with deliveries set to commence in the same month. Being a relatively new brand in the country, the MG will have its work cut out for it. Not only will it take on the Tata Harrier, Mahindra XUV500 and the Jeep Compass, it will also have to contend with higher variants of the Hyundai Creta and the Nissan Kicks. However, with a strong set of features, including a segment-first connected car system and a panoramic sunroof, it seems like the Hector has got what it takes to succeed in the mid-size SUV segment. We expect it to be priced between Rs 15 lakh to Rs 20 lakh (ex-showroom).

Meanwhile, stay tuned for a thorough spec comparison between the Hector and its rivals - the Tata Harrier, Jeep Compass and the Mahindra XUV500 - as well as a breakdown of all the features available on each variant of the latest MG SUV.