If you thought the 2021 S-Class had a multiplex cabin, the upcoming flagship electric sedan takes that to a whole new level 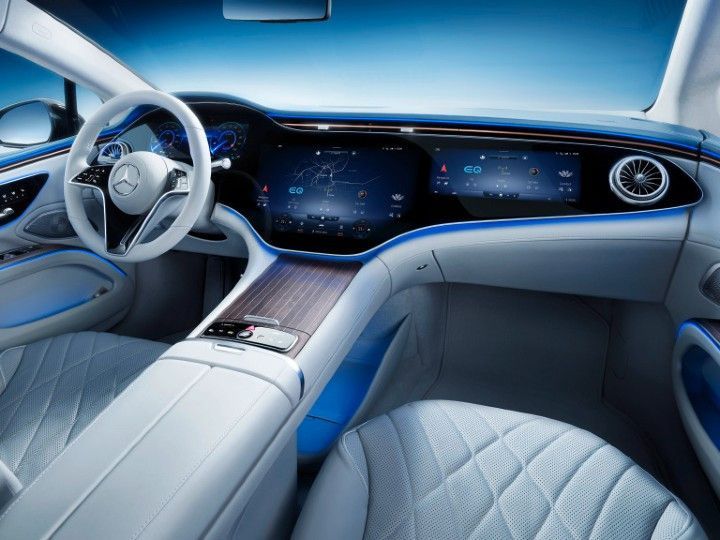 With just over two weeks left for the Mercedes-Benz EQS’s debut on April 15, more details about the electric sedan have surfaced. This time, we got to know what’s inside it, and we have to admit that the cabin looks futuristic. Here are five of the most ingenious elements of the EQS’s cabin:

When the 2021 S-Class debuted back in September 2020, its cabin stood out for featuring multiple digital screens. It was almost a multiplex on wheels. Well, now, the EQS seems to have taken the digital quotient up by notches, thanks to the three digital screens spanning a whopping 55.5 inches!

The new, voice-controlled MBUX infotainment system can be operated from any seat in the sedan. There’s also an adaptive interior assistant that utilises cameras and sensors to monitor occupants’ behaviour. For example, suppose the driver is looking at the front passenger screen. It will automatically dim the background lights when any content is displayed.

Also, suppose there is no occupant in the front seat. In that case, the screen will show only the wallpaper background (instead of infotainment functions). Of course, all this requires some serious hardware, and the EQS has just that with 24GB of RAM, 46.4GB-per-second RAM memory, and eight CPU cores.

Occupants at the back get three touchscreen infotainment displays -- two 11.6-inch screens on the front seat headrests and an optional tablet (if the other two take a long time to operate).

There’s white upholstery to complement the cabin look. Other premium features include a 15-speaker 710W Burmester sound system and an ‘ambience pack’ for sound, lighting, and aroma. There’s also a HEPA filter in the climate control system for cleaner air inside the cabin.

Base Variant Gets Some S-Class Love

The EQS will also have the premiums of the 2021 S-Class, with the base variant getting the MBUX 12.3-inch digital driver’s display and the 12.8-inch central touchscreen infotainment system. This gives some nice design options for the dashboard like  illuminated stars and wood trims.

Expect more details on the Mercedes-Benz EQS, including the electric motor and its capabilities alongside the 108kWh battery pack to surface once the electric sedan debuts on April 15. It's unclear as to whether it’ll make it to India, but it isn’t improbable. It will have the Tesla Model S, and the Audi e-tron GT to compete with.