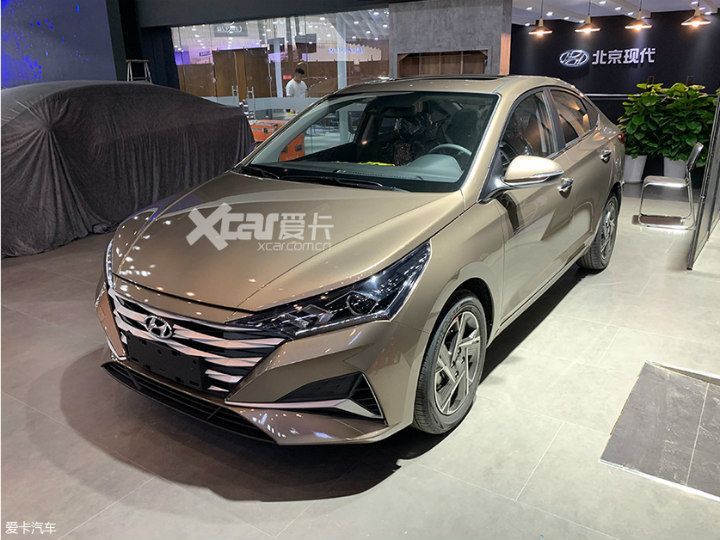 While the fifth-gen Hyundai Verna that was launched in 2017 doesn’t look particularly outdated and still comes with a ton of features, the competition is slowly but surely catching up. As a response, Hyundai has been silently preparing an update for the sedan, which was spotted for the first time testing in China. And now, the upcoming sedan has made its debut at the Chengdu Motor show in China.

At first glance, it sports various cosmetic changes and a radical design that matches up with earlier spy images. The changes are so extensive that it might lead you to think that  it is an all-new iteration of the Verna. At the front, cosmetic updates include a trapezoidal grille, larger sweptback triple-pod headlamps that merge with the grille, revised front bumper and silver inserts.

Going towards the rear, the Verna gets new tail light cluster connected with a thin LED strip that runs across the car’s width. Other cosmetic highlights include a sunroof , shark fin antenna, new alloy wheels (presumably for the lower variants) and diamond-cut alloy wheels for a higher variant of the car.

On the inside, the Verna receives interior upgrades like a larger touchscreen infotainment system and the introduction of an all-digital instrument cluster. Hyundai has yet to reveal specific details on the interior of the Verna facelift but we expect the sedan to get the Blue Link connected-car tech like the Venue SUV. Other expected features could include ABS with EBD, six airbags, ventilated front seats, wireless charging, electric sunroof, smart trunk, cruise control and more.

The China-spec Verna will be powered by a 1.4-litre motor delivering 100PS of power. The India-spec Verna on the other hand is expected to get a new set of BS6-complaint 1.5-litre petrol and diesel engines from the Kia Seltos but in different states of tune. In addition to this, the new Verna’s 1.5-litre petrol engine could be packaged to take on a 48V hybrid system. However, it remains to be seen whether this system is an option in the facelift. The facelift is also expected to be mated to a 6-speed manual with a CVT and a 6-speed torque converter option like the Seltos.

The pre-facelift Verna is currently sold in the price range between Rs 8.09 lakh - 14.05 lakh (ex-showroom India) in the Indian market. Expect the Verna facelift to be priced at a premium over its predecessor due to its cosmetic and mechanical changes. We expect the Verna facelift to either be unveiled at the Auto Expo 2020 or before April 2020 when the BS6 norms kick off in India. Once launched, it is expected to take on the likes of the Maruti Ciaz, the recently updated Toyota Yaris, Skoda Rapid and the Volkswagen Vento.