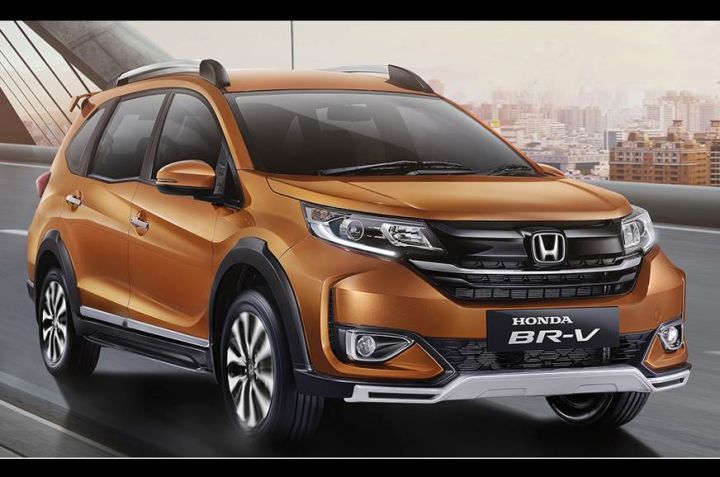 Honda has launched the facelift of its 7-seater MPV, the BR-V in Indonesia. With overhauled exteriors, sporty-themed interiors and an all-new 8-inch infotainment system, Honda has given the BR-V a much needed midlife makeover. Prices for the BR-V facelift start from Rs 11.74 lakh (Rp 238,000,000) for the base manual and go up to Rs 13.78 lakh (Rp 279,500,000) in Indonesia. To put things into perspective, the India-spec BR-V is priced from Rs 9.51 lakh to Rs 13.81 lakh (both ex-showroom, Delhi).

The Indonesia-spec BR-V facelift gets a new front fascia and we like it. Gone is the huge chrome moustache grille and in comes a bold blacked out grille with the Honda insignia. Flanking the grille are a set of projector headlamps which merge into it. The headlights also feature LED DRLs to give the BR-V more presence on the road. The front bumper is also brand new with sharp creases and lines that lend the BR-V a more aggressive look. In profile, the changes are limited to a set of new 16-inch dual-tone alloy wheels. At the back, you’ll notice that the reflector strip that connects the split tail lamps has been replaced by a chrome strip. You also get a new rear bumper with the rear reflectors sitting above the skid plate rather than in it.

Step inside and the dashboard looks more or less similar. However, the facelift carries a dash of red on the seats, doorpads and the steering wheel to give it a sportier feel. You also get a new 8-inch touchscreen infotainment system which features smartphone connectivity with Web Link that can connect with smartphones and displays certain applications on the head unit. Apart from these, the rest is the usual affair and includes an automatic climate control, steering-mounted audio controls, rear AC vents and a rear parking camera.

Honda has also equipped the BR-V facelift with its G-CON + ACE frame structure with side impact beam to give it additional structural strength. Apart from the structural reinforcements, the BR-V facelift also gets dual SRS airbags, ABS with EBD and seatbelt reminder. The Indonesia-spec BR-V also gets hill start assist, vehicle stability assist and ISOFIX points which are not present on the current India-spec car.

Mechanically, the BR-V facelift still carries the same 1.5-litre i-VTEC petrol engine as the Indian car. It produces 119PS of power 145Nm of torque, mated to a 6-speed MT or a CVT automatic which is similar to the car sold here. The Indian BR-V also gets a 1.5-litre i-DTEC diesel engine option which produces 100PS and 200Nm of torque, coupled with a 6-speed MT. Incidentally, the Indonesian market only gets the petrol BR-V.

Honda’s BR-V has been struggling to gain traction in India, thanks to stiff competition from the Marazzo, Ertiga and the Lodgy. There is no news regarding the timeline for the launch of the BR-V facelift in India. The sales of the current BR-V in India have been on a downward spiral and the facelift could give it another lease of life. However, with the new BSVI emission norms coming into effect next year, Honda might choose to bring in the newer HR-V as a replacement in India.