The Wonderful World Of Yamaha: Part 2 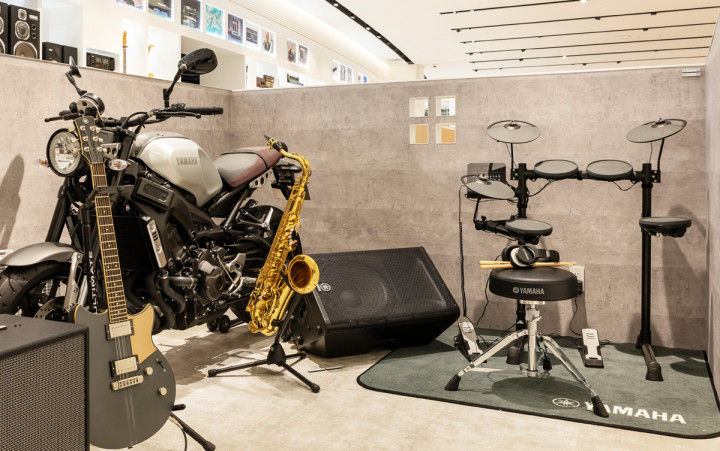 When you think of Yamaha, you think of everything from its class-leading modern superbikes to its fabled two-stroke monsters from the ‘80s. But last week, we showed you the connection that the Japanese manufacturer has with Olympic gold medals and golfing. If you missed out on that, you can check out the first part of this series here. Today, we’re going to look at some of the other avenues that Yamaha is involved in besides two-wheelers.

The brand’s logo seems like an intricate work of abstract art but a closer look will reveal that it actually consists of three tuning forks. And that’s because those are the origins of the company. What is today known as Yamaha Corporation started off over 130 years ago as Nippon Gakki Co. Ltd., a manufacturer of pianos and reed organs set up in 1887. We’ve all come across a modern Yamaha piano at some point in our lives and that’s because it is the world’s largest manufacturer of the things, but that’s not all. Yamaha is actually the world’s largest manufacturer of musical instruments, full stop.

You’ll find the tuning fork logo on everything from pianos and keyboards to guitars and drum kits to violins and cellos, and even wind instruments like trumpets, trombones and flutes, to name a few. Chris Martin’s famous graffiti’d piano? Yamaha. Alicia Keys, John Legend, Elton John and Robert Downey Jr. all have Yamaha pianos in their own homes. And the list of people who’ve played Yamaha guitars is even more star-studded. Carlos Santana, Bob Dylan, John Lennon, Paul McCartney, John Denver, Bob Marley, Paul Simon and Jason Mraz have all owned and played Yamaha guitars at some point in their careers.

The company also felt that music made on Yamaha instruments would be best listened to using Yamaha equipment, so it even makes audio equipment of its own. It produced the world’s first CD recorder in 1988, and today it offers personal audio solutions like speakers, stereo systems and amplifiers, as well as professional equipment used on the music production side of things. So good are the company’s products that it even won a Grammy in 2007 - the Technical Grammy Award for its “long tradition of highly-successful recording products.”

1954, the year that saw Yamaha build its first motorcycle, the YA-1, also saw the company establish the Yamaha Music school, which in its 66 years of existence has introduced the joy of music to over 6 million individuals. Each chapter of the school is called a Yamaha Music Point and India received its first one back in 2015.

All that work with instruments like the piano meant that Yamaha developed some seriously impressive woodworking skills. So impressive that it allowed the company to venture far beyond just violins and cellos. In much the same way that Yamaha is manufacturing sterilizing detergent today to help combat COVID-19, it stepped in nearly a century ago at the time of the 1923 Great Kanto earthquake. People’s houses were destroyed, and Yamaha put its woodworking skills to good use by manufacturing furniture like the desk and chairs that you see above. Of course, considering that the company was commissioned to produce wooden aircraft propellers in 1921, a desk shouldn’t have proved too difficult.

It’s the production techniques and machine tools used to make these propellers that eventually formed the foundation for Yamaha’s motorcycling business. So now let’s go back to the sort of areas that our readers know Yamaha for. Sure, the company is renowned for its two-wheelers, but it has a lot more involvement than you’d think in the world of four-wheelers, to the point where it has even competed in Formula One! 1988 saw Yamaha tie up with a West German organisation called Zakspeed Formula Racing to form a Formula One team: the West Zakspeed Yamaha Team. And the heart of their car was a Yamaha-built V8 motor churning out over 600PS.

The eight years Yamaha spent as an engine supplier in Formula One may not have brought it too much success, but some of its engines for road cars have been absolutely tremendous. Of course, the most famous of these is the manic 4.8-litre V10 developed in conjunction with Toyota for the Lexus LFA. This dry-sumped masterpiece churned out 560PS, 480Nm and SCREAMED to a redline of 9,500rpm so quickly that an analogue tachometer just couldn't keep up and they had to use a digital one. This also made the motor extremely sonorous, quite possibly one of the best sounding engines of all time actually.

Another motor that the two Japanese brands collaborated on was the Toyota 3S-GE which spawned its turbocharged cousin, the 3S-GTE. These random letters and numbers probably don’t mean squat to you, so let’s put it in terms you’ll understand. This 2.0-litre four-pot powered the Celica and MR2, and a modified version even went on to help three different drivers win the World Rally Championship in Group A Celica GT4s.

The company also managed to build a compact 60-degree 4.4-litre V8 that somehow made its way into Volvo engine bays (of the XC90 and S80) designed for straight-fives and V6s. A few blokes in Leicester bolted a couple of turbos to it and produced the giant-killing Noble M600 supercar with over 600 ponies on tap. Unfortunately, all we can do now is reminisce because Yamaha’s days of developing car engines are behind it, as the company announced in a statement last year.

It’s not limited to just engines, though. Back at the 2015 Tokyo Motor Show, Yamaha rolled out an entire car called the Sports Ride Concept. The tuning fork logo adorned a car that looked radical and befitting, even if it was just a design exercise that will never see a production line.

You and I might think of robots as the very cutting-edge of technology but since way back in 1976, Yamaha has been supplying robots to the industrial manufacturing sector and continues to do so even today. And it’s not just mundane assembly robots that the company is working on; the Motobot can autonomously ride a YZF-R1 superbike! It may not be giving Valentino Rossi a run for his money at the moment, but who knows what the situation will be 5 or 10 years down the line.

One thing that is certain about the future is that Yamaha will continue to broaden its horizons as a company, just as it always has, and the learnings obtained from the various other avenues will surely make a positive impact on the brand’s future motorcycles too. We hope you enjoyed this series and we look forward to bringing you more quirky automotive content in the future, so stay tuned to ZigWheels.